The House of the Dead: Overkill (Wii, PS3) Review 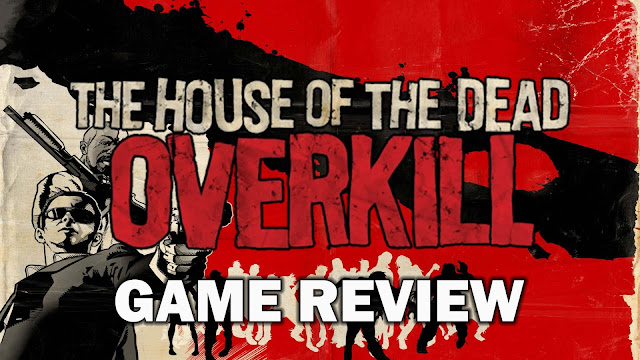 If there's one thing we can agree on about the Wii, is that it was perfect for rail shooters. Given the remote's point and click nature, it seemed like a no-brainer, and during the Wii's lifecycle, there was a rail shooter renaissance. From ports of classics like Ghost Squad to original titles like Resident Evil: The Umbrella Chronicles, there were plenty of ways to satisfy that trigger finger.

Developed by Headstrong Games and published by Sega, The House of the Dead: Overkill was a feverish reimaging of the beloved arcade shooter. This game, along with MadWorld and the Conduit, was Sega's attempt to cater to hardcore gamers who felt the Wii was nothing more than a gimmick.

Despite scoring positive reviews, Overkill didn't sell well. It flew under the radar for most but for those who did play it, they considered it one of the Wii's hidden gems.

Two years later, the game was ported to PS3 and to the PC in 2013. Today, the game is regarded as a cult classic, and in my opinion, it's the best of the House of the Dead series.

Set before the first game, Overkill follows Agent G on one of his early assignments. He's partnered with veteran cop Isaac Washington and sent to find Papa Caesar. Caesar has been toying with a compound that turns people into zombi-, I mean, mutants. The mutants are wreaking havoc across Bayou County, and the two must apprehend him.

Joining them on their campaign of carnage is Varla Guns. Varla wants revenge after Caesar took her crippled brother Jasper and made him his lackey. Fed up with Caesar's abuse, Jasper injects himself with the compound to try and kill his boss, but he's intervened by G and Washington. Little do any of them know Caesar is really working for the county warden, Clemence Darling, who has his own plans for the compound.

Take everything you know about the House of the Dead and throw it out the window because The House of the Dead: Overkill is a wild reimagining. What was once unintentional schlock is now pure, unadulterated schlock. It's violent, it's profane, it's sleazy, and more importantly, entertaining.

The game is a love letter to grindhouse flicks of the late 70's and early 80's. A film grain saturates all the in-game action, the cut-scenes double as mock film trailers, and there are even continuity errors and missing reels. These little details add to the game's personality. Ditto for the PS3 version, which features colorful menus and loading screens inspired by EC Horror Comics.

In a series known less for its story and more for its gameplay, it's nice to see the House of the Dead: Overkill make an active effort in the story department. The plot starts simple but takes an unexpected turn in the final act. Spoilers ahead, but Clemens Darling discovered the compound underneath his prison. He wants to use said chemical to save his dying mother.

Did I mention he has an Oedipus complex?

Not everyone will be on board with the game's more shocking moments, but much like grindhouse flicks, this isn't trying to be high art. This is trash, delightful trash.

At the center of this rollercoaster ride from hell is Agent G and Isaac Washington. The two are the classic buddy cop duo. Agent G is the straight man and Isaac Washington is the foul-mouthed loose cannon. Washington spews so many f-bombs, he makes the Angry Video Game Nerd look like a pansy.

No joke, this game once held the world record for most f-words in a game, until Mafia II usurped it. The back and forth banter between these two is hilarious. Whether they're talking about the joys of driving a car to your favorite music or Washington's constant swearing, there is never a dull moment.

Special mention needs to be given to Papa Caesar. This Cajun Burt Reynolds lookalike is a fantastic villain. He loves toying with Washington and waxing philosophical about death and Chinese dinner. Clemens is fine, but he's no Caesar.

Like the games before it, the House of the Dead: Overkill is a rail shooter. You'll blast through mutants, save civilians, shoot collectibles and power-ups, and take on a boss at the end of each stage.

The game's seven levels guide you through a Louisiana mansion, a hospital, onboard a train, and through a mutant-infested prison. The PS3 version adds two new levels featuring Varla Guns and her dim-witted but good-nature friend Candi Stryper. Their adventure takes them to a strip club, the city streets, and a meat-packing plant.

The gunplay is simple but satisfying. Pointing and shooting with the Wii remote or Move controller feels great. If there's one reason to own a Move, it's for the House of the Dead: Overkill Extended Cut. You have the option to use a regular controller but choosing that is like choosing to remain abstinent. You're missing out on all the fun.

You start the game with a pistol, but by earning cash, you can buy upgrades and new weapons. Upgrades decrease reload times, increase ammo, increase damage, etc. Besides the pistol, there's the shotgun, the assault shotgun, the SMG, and the assault rifle. In the Wii version, you're able to unlock a hand cannon and a minigun by completing Director's Cut.

Additional guns like a crossbow were added to the PS3 version, plus the prices for weapons and upgrades were tweaked.

Out of all the guns available, I found the handgun, shotgun, and assault shotgun to be the most useful. The SMG and assault rifle are great for mowing down enemies but terrible for maintaining a combo. Keeping a combo is essential for a high score. The bigger the multiplier, the more points per kill you earn.

Chain enough kills together, and you'll get the coveted GOREGASM, which nets you 1,000 points per kill.

Either way, the combat is fun. Bullets rip chunks out of enemies and pop heads like balloons. The
slow mo-fo" power-up slows down time and turns mutants into bloody pulp. House of the Dead: Overkill revels in its carnage, but it's also a breeze to beat.

Even with modifiers like extra mutants, the game isn't terribly challenging. You have unlimited continues in the story mode and if you die, you lose half of your score. In director's cut, you're given three lives. Lose them all, and it's game over.

The boss fights are basic. As grotesque as they look, each one has an easy-to-spot weakness, and the game always tells you where to shoot. The PS3 version adds new attack phases to each boss, but even that doesn't change the fact the game is still a cakewalk. Additionally, the enemy AI is sometimes inept, doing things like getting hung up on walls or running around in circles like a chicken.

Both versions of The House of the Dead: Overkill are loaded with content. After beating the story mode, you unlock director's cut. Director's cut features extended levels with alternate paths and extra collectibles to find. As previously mentioned, the PS3 version features two new levels, but it also has additional modifiers like headshots only or pistols only.

The campaign takes three to four hours to beat, which is longer than previous House of the Dead campaigns. With the extra modes, modifiers, and more, there's plenty to keep you coming back. A handful of minigames including a survival mode and escort are available as well.

On Wii, The House of the Dead: Overkill looks good. Some of the levels look murky and I noticed a lot of framerate hitches during gameplay. Additionally, character animations during cut-scenes look stiff. Weirdly, these faults add to the low budget, B-movie aesthetic the game fors.

The PS3 version is another story. It's like upgrading from the regular release DVD to the special edition blu-ray put out by Scream Factory or Severin' Films. The graphics are crisper and more colorful, plus the game runs smoother. Comparing these two side by side, the difference is night and day.

The Wii version is grimier, which adds to the aesthetic, while the PS3 version is more vibrant and pulpier. However, this version has its own technical issues, like audio bugs and some hilarious ragdoll. Often, dead enemies fly across the screen like they're auditioning for a circus act.

The voice acting is proudly profane. The frequent swearing is so over the top, you can't help but laugh. The music is phenomenal. It's an eclectic mixture of funk, rock, surf rock, and even country. Some of the songs are bizarre, like a country tune about a one-night stand with a mutant, while others such as "Wash's Day Off" are catchy as hell.

I love The House of the Dead: Overkill. In my opinion, it's the best of the franchise because it reimagines the series in a way that's fresh instead of try-hard and edgy. It's a love letter to a by-gone era of cinema, a time when movies like Basket Case and The Evil Dead shocked audiences with their rampant gore and bizarre plots.

To put it this way, the previous House of the Dead games were like a carnival haunted house. They were less about scaring you and more about entertaining you. The House of the Dead: Overkill is what happens when you return to that same haunted house, but Joe Bob Briggs is running the show. Lots of blood, lots of beasts, lots of breasts.

As for which version is better, the PS3 version is the obvious winner. It has more content and better visuals, making it the definitive version of the game. That's not to say the Wii version is bad. It's a wild ride with plenty to offer, plus the grimier visuals add to the drive-in aesthetic the game lovingly pays tribute to.

Posted by William Lowery at 6:13 AM No comments: