The Complete History of Destroy All Humans - Post Mortem 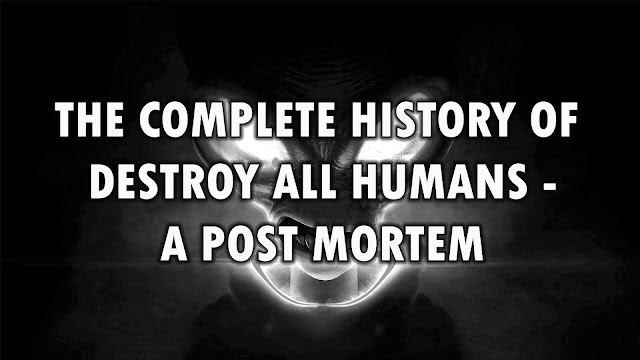 As of September 20, 2022, the Complete History of Destroy All Humans has been out for three days, and so far, it's doing well, better than I expected. The video has over 2,100 views and reactions have been overwhelmingly positive. Heck, the writer of the first two games, Tom Abernathy, live-tweeted his reactions, which was a first!

Now, that the video is out, I've been able to rest, recuperate, and gather my thoughts. This is a post-mortem on the project where I talk about what it took to bring it all together.

Before I start, I want to say thanks for your support. You guys are what pushed me to see this documentary through and make it something special. It had its hurdles, especially in the last couple of months, but I got it done.

As I've mentioned many times before, I'm a huge fan of "Destroy All Humans." I played the original and its sequel when I was 14 and they blew my mind. Up until then, I had played stuff like "Mario" or "Spyro," stuff mainly meant for kids. "Destroy All Humans" was one of my earliest exposures to games meant for an older audience. It may have been rated T but running around, probing butts as a Jack Nicholson-sounding alien left an impression on my puny mind.

I remember when I first beat the original and unlocked the extras like "Developer Darwinism." I was blown away by all the behind-the-scenes info they showed. This was the first instance where I learned about game development and how a game evolves from its early version to the final product.

I played the later sequels and enjoyed them, but when I learned how bad the reviews were for "Path of the Furon," I remember wondering why the game reviewed so badly, despite how the old trailers hyped it up.

Years pass, I get older, and though my tastes in gaming expand, I never forgot "Destroy All Humans."

In 2020 and 2021, I did a handful of interviews with people who worked on the series, including writer Tom Abernathy and "Big Willy Unleashed" producer Ken Allen. In late 2021, I wrote a short piece about the making of "Path of the Furon" and "Big Willy Unleashed." Both were well-received, and in "Path of the Furon's" case, someone shared it on the Two Best Friends Play subreddit.

Seeing the reactions from the interviews and retrospectives got the juices flowing, and in November, I began outlining the project.

The original idea for "The Complete History of Destroy All Humans" was to do a 30-minute video on the series. I was going to do a handful of interviews to get some additional info. At the start of 2022, I decided to expand the project into a five-part series, with a separate video on each game.

Then, it became a three-part series at the suggestion of Gautier Roux, the man behind the Destroy All Humans Tribute Twitter page. THEN, I decided to go all-out and make it a feature length video. I wanted to test myself as a content creator, and I figured making it feature-length instead of breaking it up into parts was the way to go.

My goal for this documentary was to make something comprehensive, in-depth, but didn't overstay its welcome or get bogged by mundane details. There's a documentary on "Spyro: Enter the Dragonfly" on YouTube, and while it has some great stories about the game's troubled development, it lacks structure and features a lot of pointless detours talking about unused assets, music, etc.

I didn't want to make that. I wanted to make something both the hardcore DAH fan could enjoy, but also the average Joe who knows nothing about the games and wants to learn how they were made.

Matt McMuscles' "What Happened?" series was a huge influence. In the span of 15-20 minutes, his videos give you everything you need to know about the bad game or movie being discussed. I applied that mindset to the documentary.

The idea was you could jump in, watch any part of the video, or the whole video, and learn everything possible.

Another influence was "More Brains: A Return to the Living Dead." This is a two-hour documentary about the 1985 horror/comedy "Return of the Living Dead" and it gives you everything you might want to know about the movie's production, plus some stuff you didn't know about. It's two hours long, but it doesn't feel like two hours because it moves along at a swift pace.

I wanted to make this documentary lean, mean, but informative. I sent a 40 min. rough cut to an editor friend of mine and after watching it he said it didn't feel like 40 minutes had passed by.

Because this was a documentary, it meant doing research and more importantly, doing interviews. The interviews were one of the vital aspects of the documentary because they helped shape the script. All told, I interviewed 15 people for the project.

How did I reach out to them? Social media. I asked politely if they would be willing to answer questions for the project. Then I wrote the questions, sent it to them, and waited for his/her response.

Their answers helped shape the script and add meat to parts lacking info. For example, the "Destroy All Humans 2" section was the shortest section for the longest while. It wasn't until I got in contact with Kiera Lord and Milenko Tunjic that I got some extra info on the game's development.

In some cases, it led to some surprises, like when I interviewed Don Traeger, the head of Locomotive Games, who revealed "Big Willy Unleashed" was initially conceived as a collaboration with Pandemic Studios.

Like I said, Gautier Roux was very helpful because he provided me with archives of DAH-related material he's found over the years. From concept art to beta images and more, he's cultivated quite a bit, and it made the process of finding interesting/lost DAH material much easier.

With a big project like this, there were challenges; many, many challenges...

Because "The Complete History of Destroy All Humans" was a one-man army project, it meant I was doing all the heavy lifting. I did all the outlining, writing, and editing. When I first started working on the project, the idea was I'd script it in the winter, shoot and edit it during the spring, then release it summer 2022.

Yeah, and monkeys will fly out of my butt!

In all seriousness, I was working two jobs at the time. This didn't leave a lot of wiggle room, so I had to either work on the project, or work on videos I had planned for my then-newly launched YouTube channel. No joke, one night at my second job, I wrote questions and sent them to one of my interviewees while I was on the clock. Good thing I didn't get caught.

Eventually, I left both jobs and began working a new job that freed up my schedule considerably. Then, it was full steam ahead.

I didn't interview any voice actors because I didn't want to go through the hassle of contacting their agents to arrange a short interview that may or may not would have happened. It would have been great if I had been able to speak with Grant Albrecht or Richard Horvitz, but it didn't happen.

I also didn't interview anyone who works at Black Forest Games. It would have been nice to get insight from them about the making of both remakes and what they hope the future holds for their studio and DAH, but it didn't happen. Fortunately, I was able to utilize interviews they had already done.

I had thought about including a short bit about the cell-phone games, but in the end, I decided not to worry about them. I didn't consider them essential in the grand scheme of things.

I studied journalism in college, and one thing constantly repeated by my teachers is deadlines are a journalist's worst enemy. Either you make the deadline, or you don't.

I had planned to release the documentary in August, and when "Destroy All Humans 2: Reprobed" was announced for August 30, I thought I'd be able to finish it and release it the day before the game's release.

That wasn't the case.

I had to finish some other videos first, and by the time I could work on the documentary, the game was almost out. I did some late-night crunching to try and finish it, but at a certain point, my brain said, "Delay it. Delay it and tell them when it's done, make an announcement," and I did.

After months of work, the video was finished. Only one problem: our internet is slow. I had to restart uploading a few times until it finally uploaded at a reasonable pace. I apologize for saying it would come out this past Friday when it ended up coming out the day after.

Had I realized upload speeds would be so slow, I would have had it uploading late Thursday afternoon, that way it'd be almost finished the following Friday morning.

Making a video on the history of a video game franchise is no easy task. It requires a lot of planning, writing, revising, and more. This project was a huge test of skill and though it had its challenges, I pulled through and got it done. I had my doubts and concerns, but I'm relieved it's doing well.

However, I'm not going to rest my laurels on this video.

I'm going to keep making videos and pushing myself as a content creator. I have a few ideas in mind for what next year's documentary will be, and I'm taking the lessons I learned from this project and applying it not just to next year's project, but the rest of the videos I make this year and beyond.

Again, thanks for your support. Seeing you guy's enthusiasm on here, the DAH Discord servers, and other places like Twitter and Facebook are what kept me going and ensuring I saw this to the end.

Posted by William Lowery at 2:57 AM No comments: