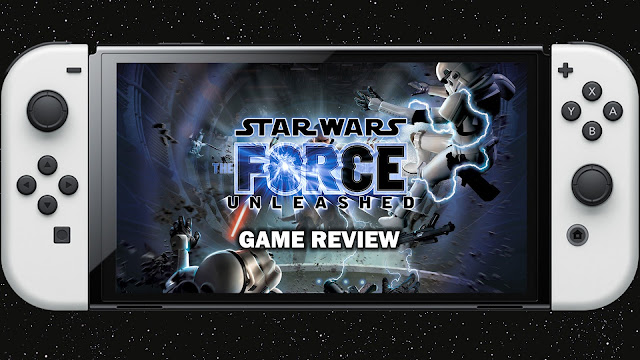 A long, long time ago, in a galaxy not too far away, the future of Star Wars was up in the air.  2005's Revenge of the Sith marked the end of the prequel trilogy and the Star Wars saga.  With no new movies for the foreseeable future, it was up to television, comics, and video games to provide people their Star Wars fix.

There has been a plethora of Star Wars games.  Some good, some bad.  In 2008, LucasArts released Star Wars: The Force Unleashed, a game which asked the question, "What if you could use the Force to pull a Star Destroyer out of the sky?"  The game made headlines for using the Euphoria physics engine and for its story, which was set in between Revenge of the Sith and A New Hope.

To ensure the game did well, multiple versions were created for next-gen systems, last-gen systems, handhelds, and even mobile phones.  LucasArts handled development duties for the next-gen version, while the Australian-based Krome Studios worked on the Wii, PS2, and PSP ports.  In early 2022, publisher Aspyr surprised everyone by announcing a remaster of the Wii version for Nintendo Switch.

The game opens with Darth Vader landing on Kashyyk.  The Sith Lord is looking for a Jedi hiding out on the Wookee home-world.  He finds the Jedi and is about to execute him when he discovers the Jedi has a son.  Vader murders the Jedi, takes the boy, and raises him in secrecy.  Trained in the ways of the dark side, Starkiller is tasked by Vader to eliminate all remaining Jedi.

Assisting him on his journey is his personal droid Proxy and his pilot Juno Eclipse.  Eventually, Starkiller begins veering from the dark side and onto the path of good.  His actions lead to the creation of a rebel alliance that will fight back against the Galactic Empire.

The Force Unleashed's story does a good job bridging the gap between the prequels and the original trilogy without coming off as fanfiction.  This game may be considered non-canon, but it's a solid tale backed by memorable characters and good writing.

Starkiller's journey from evil to good is what keeps you invested.  He's like Luke if Luke had been raised by Vader.  He believes the Sith is good and the Jedi are weak.  However, when he's assassinating Jedi master Rahm Kota, the seeds of his redemption are planted.  As the game continues, he realizes the dark side isn't what it's cracked up to be.

The level selection reflects this.  You spend the first half following Vader's orders, and then in the second half, you return to each planet to undo the damage you caused.  Starkiller's pilot/potential love interest is Juno Eclipse.  She's there to do her job but after she's arrested by the Empire, Starkiller saves her, and she helps him in his quest.  Just as you think the two are about to fall in love, Starkiller sacrifices himself to save the rebellion.

Proxy is a droid and Starkiller's trainer.  The best way to describe him is that he's C-3PO's psychotic cousin.  When he's not providing detailed information on characters and missions, he's trying to murder Starkiller to fulfill his programming.  Unfortunately, this aspect of the character is absent from Krome Studios' version, which is a shame because his dark humor led to some funny moments in the HD version.

The story and characters are the same between LucasArts and Krome Studio's versions.  However, the latter is based on an earlier draft of the game's script, so it features levels not seen in the LucasArts title.  These include trips to the Jedi temple and a detour to Cloud City.  While this is cool for hardcore fans, the extra levels don't impact the story much.

The Jedi temple levels are unnecessary because they don't add anything meaningful.  Plus, you visit this place not once, not twice, but three times.  At least with Cloud City you are there to convince the planet's leader to join the rebellion, and save him from the bounty hunters wreaking havoc.

My favorite aspect of the story is the locations.  Although you travel to familiar places like Kashyyk and the Death Star, you also visit planets referenced or briefly shown in the films, like Felucia and Raxus Prime.  Raxus Prime is a standout because of its design and atmosphere.  It's a rundown planet built on the remains of droids and starships, so everything is rusty, dank, and decrepit.

I like it when Star Wars shows us sides of the galaxy we've rarely seen, and the Force Unleashed is no exception.

Star Wars: The Force Unleashed is best described as God of War Meets Psi Ops.  You can slash at foes with your lightsaber or knock them around using the Force.  The most unique aspect of this recent remaster are the controls.  The game lets you choose between using a mixture of motion and traditional controls, or just traditional controls.

I played the game exclusively using the former and it was quite satisfying.  Swinging the lightsaber with the right joy-con felt more responsive than it did in the original Wii game.  That version had a hard time reading your swings, so you would flail your remote around and hope for the best.  Not the case here.

Using force push is done by shaking the left joy-con, while other abilities like lightning, repulse, and dash are allocated to the face buttons and triggers.  The game does a great job mixing these two control styles together, and it made me feel like a little kid swinging his toy lightsaber around while pretending to fight stormtroopers or droids.

The gameplay itself is typical hack and slash fare with a Star Wars touch.  There's a wide assortment of abilities and combos to unleash, and it's fun experimenting with your move-set to see what works best.  While the combat is more polished in LucasArts' version, Krome Studio's take is more creative, and in my opinion, more fun.

What also helps keep the combat enjoyable is the diverse enemy roster.  Each planet has its own unique faction, like junk scavengers and scrap droids on Raxus Prime, or native warriors and Rancors on Felucia.  You aren't exclusively fighting the Empire, and the varied roster encourages you to mix up your fighting tactics.

The Rogue Shadow is Starkiller's ship and acts as a hub in between levels.  You can customize your lightsaber, buy upgrades, change outfits, or look at concept art.  There are even cheat codes to input that unlock infinite health, infinite force energy, or access to skins based on legacy characters like Luke Skywalker and Admiral Ackbar.

Though its fun tossing stormtroopers like ragdolls, the gameplay does show its age.  The lock on is spotty.  It often locks on to the the wrong thing you meant to grab or slash.  The enemy AI isn't the brightest either.  I've seen them run into walls or get hung up on objects.  Checkpoints are frequent so even if you die, you won't lose much progress.

The boss fights are serviceable, but it's easy to spam your moves and cheese yourself into an easy victory, and because this is a game from 2008, you use quick time events to finish them off.  Although these sequences are well-animated, the prompts to shake the left or right joy-con in time remind you that this is a 2008 game remastered for 2022.

Star Wars: The Force Unleashed features quite a bit of post-game content, including a new game plus option and multiplayer.  Disappointingly, the remaster lacks the PSP-exclusive bonus missions, but the game makes up for this with its GRAPHICALLY IMPRESSIVE visuals.

Someone should have told Aspyr that Wii games weren't meant to run at 60 FPS.  In all seriousness, I'm impressed with how Aspyr remastered this game for the Switch.  Some of the textures look basic and the facial animations are noticeably stiff, but other things like the lighting and environments look great.

The physics might not be as dynamic as Euphoria, but environments are destructible and there's some satisfying ragdoll when you throw someone into a bottomless pit.  I did encounter some minor glitches.  Enemies got hung up on the environment and the ragdoll sometimes made enemies look like they were having a seizure.

The strangest bug was when an enemy suddenly became invincible, unable to be killed or grabbed with force grip.  Fortunately, this didn't prevent me from beating the level.

Again, it surreal seeing this game with crisp graphics and a smooth framerate.  Yet, I think it goes to show how Krome Studios didn't half-ass the visuals and put in the effort to make the Wii version look as good as possible.  After playing it, I started thinking about what other Wii games could be remastered for the Switch.  Anyone up for a Ninjabread Man remaster?

Sound is great.  Lightsabers sound like lightsabers and enemies make satisfying death sounds.  The voice performances are great, particularly Sam Witwer as Starkiller.  This game made him a go-to guy for the franchise as he went on to voice Darth Maul and Emperor Palpatine in future Star Wars projects.  The music is good, relying on a mixture of classic Star Wars tracks and new music to heighten the action.

Star Wars: The Force Unleashed is a solid remaster of its Wii port.  Whether or not you choose to get this version or the readily available LucasArts version boils down to personal preference.  Both games have their strengths and weaknesses.  The Force Unleashed on 360, PS3, and PC is a fine hack and slash but a fantastic tech demo for Euphoria.

The Force Unleashed on Switch is a fine hack and slash that makes the most of the hardware it was on.  The graphics may not be as sharp, but its strong art direction and visual flair help this version stand toe to toe with its HD big brother.  Plus, they ironed out the wonky lightsaber swinging, so you can swing your joy-con and not worry about spraining your wrist.  While I enjoy the HD version for its technical achievements, I enjoy this version for its gameplay and controls.

As for the story, it's an enjoyable tale of evil becoming good, and how one man's actions spark a movement against the Empire.  It's a satisfying story that was in no way ruined by an unnecessary sequel that turned a cool character into a misguided simp.

Posted by William Lowery at 6:19 AM