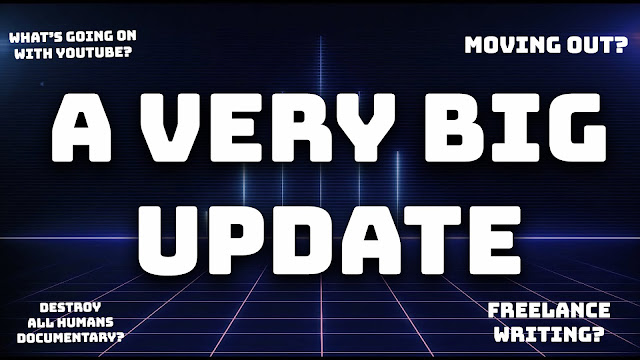 It's May.  The temperatures are getting warmer, school's out, and there's a lot going on that I have to discuss.  From a new YouTube channel to a new project to a new chapter in my life.

This year, I launched the GamerGuy's Reviews YouTube channel.  With the power of a desktop computer by my side, I'm able to make videos hassle free.  However, looking up my channel shows three videos and three videos only.  You might also notice a two month gap between the last video and my most recent one.

The reason is simple: I was working two jobs.  One during the day, and one at night.

This left me enough time to write, but not enough to produce videos.  Thus, I put videos on the backburner to focus on writing.  This allowed me to at the very least, take any videos I had planned and still put them out as an article.  It was a tough call, but I didn't want to deliver a half baked video.  The good news is I no longer work a night job, which has freed up my schedule.

Even though I've only done a few videos, it's been an interesting experience.  Making videos is like finding your voice all over again.  It's one thing to write a review, it's another thing to write a review that doubles as a script.  Then, there's recording lines, something I dread.  I go through many takes until I hit upon one that sounds just right.  Surprisingly, the least difficult part is editing, though it probably helps that I outline my videos ahead of time.

The more time I spend doing videos, the easier it will get.  My idea moving forward is to do a simultaneous release where the video and article go up together.  I did it with the Force Unleashed review, and I'll keep it that way moving forward.

On the subject of upcoming videos, I have one in the works that's been a long time coming.

The History of Destroy All Humans

Ever since THQ Nordic revived Destroy All Humans, I thought it would be cool if someone explored the series' history.  Then I realized, why not me?  At the end of 2021, I began writing scripts for The History of Destroy All Humans, a line of videos exploring the making of the cult-classic series.

This is a project I'm excited about.  Destroy All Humans is one of my favorite franchises.  It's been fun yet fascinating learning more about the series through my research and doing interviews.  It's given me a better understanding of game development and what it takes to bring a game to fruition.

Originally, I planned on releasing the series next month, with a trailer in April.  Because I was juggling two jobs, I wasn't able to devote as much time to the project as I had hoped.  Last month, I resumed work on the project, and progress has been smooth.  This week, I finished writing the script for Path of the Furon, leaving only the remakes to talk about.  That script will be finished this weekend.

Like I said, this will be a series.  I was originally going to make it a single video, but when I saw the page count had hit 18 pages, I decided to split it up.  This is good because viewers won't fall to sleep, and I won't lose any sleep trying to edit a two-hour long video.

The History of Destroy All Humans is a passion project.  It's satisfying on a personal level and a professional level.  If I pull this off, this could bring a lot of attention to my work.  We'll see.

I'll upload an announcement trailer next month.  The History of Destroy All Humans is coming to YouTube this August.

In March, I applied to a handful of websites looking for freelance writers.  I ended up being hired by KeenGamer.  I'm glad for the opportunity because it'll allow me earn some experience writing for a legitimate website, plus I'll get paid for my efforts.

This is a big one.  At the end of May, I'm moving out of my parents' place.  I've lived in this house all my life.  Even during college, I stayed at home instead of living on campus.  While I'll always have plenty of fond memories, it's time for me to move on.  I'm 25 years old and I can't live in this house forever.  If I do, I need my head checked out.

Even as I write this, there's a mixture of emotions running through me.  I'm nervous, I'm excited, and I'm relieved, relieved knowing I'm about to start a new chapter in my life.  I'll be on my own, charting courses for unknown destinations.  Boldly going where I've never gone before.

I'll still be writing reviews and making videos, but I'll be doing it from the comfort of my own place.

Five years ago, I came close to calling it quits.  My work/life balance was out of control and I was jeopardizing myself.  I struggled writing because my brain was fried, but I chose not to quit.  I gave myself a month off to put myself back together, and I came back with a vengeance in 2018.

Will I ever stop writing GamerGuy's Reviews?  Yes, but not for the immediate future.  I'm capable of a lot more, and frankly, I'm just getting started.  Now, that I'm on YouTube, I need to build an audience on there, and in turn, get them to check out what I write.

As a wise man once said, "You're only given a spark of madness, you mustn't lose it."

Posted by William Lowery at 4:19 PM