Evil Dead: The Game: Why I'm Excited, Why I'm Concerned, and What I'd Like to See 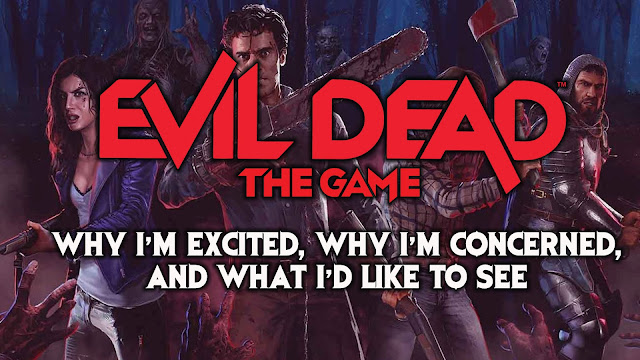 In the late 1970's, a group of friends set out from Michigan to make a horror movie in rural Tennessee.  That movie was The Evil Dead, and those friends were Sam Raimi, Rob Tapert, and Bruce Campbell.  Though filming took place in freezing conditions and went overschedule by a few years, the result was the ultimate experience in grueling terror.

The Evil Dead spawned two sequels, a remake, a TV series, and Bruce Campbell, king of the chins.  There were also video games.  The first attempt was a Commodore 64 adaptation of the first movie.  The later games, including Evil Dead: Hail to the King and Evil Dead: A Fistful of Boomstick, acted as unofficial sequels to the film trilogy.

2005's Evil Dead: Regeneration was the last time Evil Dead graced consoles, not counting the mobile games and cameos from Ash Williams in Poker Night and Dead by Daylight.  In 2020, Evil Dead: The Game was announced.  An asymmetrical multiplayer experience, Evil Dead: The Game brings together characters and demons from across the franchise into one game.

1. Respect for the Source Material

Developer Saber Interactive has touted the game's authenticity, and judging by what's been shown, the developers have nailed the look and feel.  The roster of playable characters includes Ash Williams.  Not just any Ash Williams, mind you, but all four of his film and TV incarnations.  That's more Bruce than you can handle.

The trailers have teased many nods to the franchise.  For example, Deadites can create traps like a box full of little Ash's, or a box with Ash's severed hand, which will temporarily distract the player.  During gameplay, you play as the roaming, evil force, and the movement effectively mimics Sam Raimi's camerawork.

Additionally, survivors will chat during gameplay, and people who played the game said they noticed many callbacks, and I imagine there will be plenty of Easter eggs hidden for fans to find and geek out on.

Fan service is fine, but what about the gameplay?

As mentioned, Evil Dead is an asymmetrical multiplayer experience.  Four people play as the humans, one person plays as the Deadites.  The humans need to find the Necronomicon and use it to stop the Deadites.  As the evil force, you must use your powers to stop them.  This set-up will be familiar to those who played Friday the 13th or Dead by Daylight.

What makes Evil Dead: The Game unique is the survivors and demons are split into classes.

When they touted how you can play as different characters from the movies, one thing I immediately wondered was, "Why would I want to play as anyone other than Ash?"  Fortunately, the factions give a reason to play as characters like Scotty, Pablo, or Kelly.

The factions are Leaders, Warriors, Hunters, and Support.  This provides an incentive to try out the roster since different characters occupy different classes and have different abilities.  This is also a clever way to feature four playable Ash's because each incarnation occupies a different class.

As is the case with games like Dead by Daylight or Left 4 Dead, cooperation is key to survival.  If you want to find the book and put an end to the darkness, then you need to work together.  This isn't like Friday the 13th where you could team up or let things devolve into chaos.

On the demonic side of things, each of the three Deadites has their own class and abilities.  Game Informer released a video showcasing Deadite gameplay, and as the evil force, you need to collect energy to do things like summon minions, set traps, or do things like possess players or control the head Deadite.

Unlike Jason Voorhees from Friday the 13th or the killers from Dead by Daylight, you're not an unstoppable force.  Managing your resources and knowing when to attack the survivors is important.  Plus, Deadites like Henrietta or Elegos can be killed.  You don't want the humans to win, so play smart.  Play S-mart!  You got that!

When the game was announced, it was multiplayer-only.  Not long after, Saber delayed the game for extra development time and to add a single-player component.

This is good because single player will allow people to familiarize with the mechanics, or play the game by themselves because their human companions acted like a bunch of primitive screwheads.  Either way, single player features a handful of missions, as well as an offline version of the multiplayer, complete with bots.  Plus, missions let you unlock skins and other free items.

1. Will the gameplay grow stale?

One problem with a lot of multiplayer-focused licensed titles is the staleness factor.  When you're doing the same thing over and over with little variation, it gets mind-numbing.  The worst case example is Predator: Hunting Grounds.  They spent more time and money getting Arnold Schwarzenegger than they did creating interesting gameplay.

Evil Dead: the Game doesn't look like it will fall into the same trap.  With multiple characters, classes, skill trees, plus solo and multiplayer options, there's enough to keep players busy.  However, we'll see a few months after release if it's still enticing new gamers, or if it's been forgotten.

2. The Lack of Marketing

Evil Dead: The Game isn't being put out by a AAA company.  In fact, this is the second game of publisher Boss Team Games.  That's fine, but up until this month, both the developer and publisher have been mum on the game.

We're one month away from Evil Dead's release, and only now are we getting more coverage, including a cover story in Game Informer and a press event later this April.  Prior to this, there was a pre-order trailer and two gameplay trailers, all of which came out several months apart from each other.

Not every game gets a boatload of media coverage, but I'm surprised how only now is the game being properly shown off.

Games like Friday the 13th and Predator were infamous for the long wait times in between matches.  When everyone's wanting to be the Predator or Jason, expect to stare at the main menu screen a long time.  This isn't accounting for the rampant glitches and other issues that plagued both titles at launch and continue to happen to this day.

Hopefully, Evil Dead: The Game doesn't suffer from these issues.

The game has potential to be good, or at the very least, decent.  A $20 season pass is available for the game, a season pass that promises more content at regular intervals.  The Evil Dead franchise offers a plethora of possibilities when it comes to characters, locations, or even modes.

I've seen a lot of demand for characters from the 2013 remake, or for characters like Bobby Jo and Jake from Evil Dead II.  The launch game features one map, a gigantic map, I might add, but it'd be great to see Arthur's castle or Ash's hometown from the TV series as selectable locations.

As for modes, one idea I had was what I like to call "Dead by Dawn," where the humans must hold out until dawn while the Deadites try to possess all the survivors and swallow their souls.  You could set this mode in a small portion of the map and punish players with instant death if they try escaping.

Since characters from Army of Darkness are in the game, why not a survival mode set in Arthur's castle?  You need to protect the Necronomicon from the army of darkness using any means necessary.  This mode could let players drive the Death Coaster, Ash's modified Delta 88.

Who knows what Saber Interactive has planned, but these are some suggestions courtesy of a 25-year-old guy with too much time on his hands.

I hated horror movies as a kid.  I found them too scary, too frightening.  Years later, I came across a copy of If Chins Could Kill, Bruce Campbell's autobiography, and read his stories about making the Evil Dead movies.  This motivated me to track down the films and before I knew it, I was a horror fan.

Evil Dead games have had their ups and downs.  For me, I see this new title as a chance to introduce the cult series to a new generation.  This was the case with Friday the 13th as it exposed a lot of people to the gory world of Jason Voorhees.  If the gameplay is good and the fan service is plentiful, then this could be the surprise hit of 2022.

Bruce Campbell may no longer be playing Ash on camera, but video games let him reprise the role with none of the physical hassle.  The same goes for all the other actors who returned for this game.

Only time will tell if the game is groovy, or if it's dead by dawn.

Posted by William Lowery at 9:19 AM