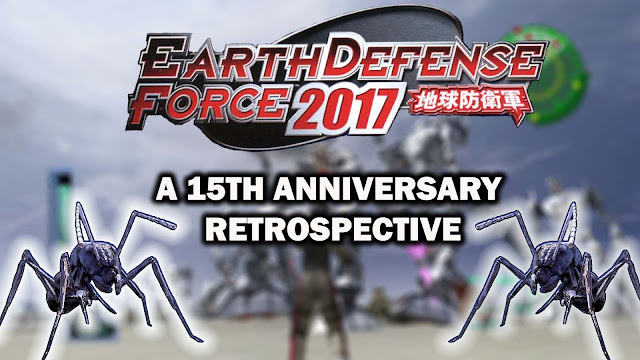 Let's journey back to 2007.  It was a time when MySpace was all the rage, YouTube was in its infancy, and blockbusters like Spider-Man 3 and Transformers dominated the box office.  2007 was a year which saw many great games like Bioshock, Super Mario Galaxy, and Earth Defense Force 2017.

Earth Defense Force 2017 was an oddity.  It was the third game in a series few were aware of.  The box art was unremarkable, and it released for the low price of 40 dollars.  Plus, it looked less like an Xbox 360 game and more like a high-res PS2 game.

It looked like junk, but what people didn't expect was that it was entertaining junk.  Earth Defense Force 2017 holds a 69 on Metacritic.  Critics praised the game for its bug-blasting action but criticized its shoddy production values.  IGN's headline stated, "Somebody please give these guys a bigger budget."

Neither game received a western release out of reluctance by Sony America.  In an interview with Polygon, series producer Nobuyuki Okajima explained, "They didn't want cheap games, or games with bad graphics, or games with unstable framerates, and so on."  However, Earth Defense Force and its sequel were released in Europe as Monster Attack and Global Defense Force.

In the distant future of 2013, a radio wave is picked up by Earth's satellites.  Theorizing that this signal was sent by an alien lifeform, the Earth's nations band together to form the Earth Defense Force.  This group is tasked with protecting the planet from potentially hostile invaders.  Fast forward four years to 2017, where a huge spaceship is spotted floating above a Japanese city.

Earth Defense Force 2017 won't win awards for its plot or characters, which are minimal.  However, one of the game's greatest strengths lies in its storytelling.

Earth Defense Force 2017 is both a fantastic shooter and a brilliant radio drama.  Intel regularly chimes in with updates on how the fight against the Ravagers is going in other parts of the world.  It gives you a good idea on the scope of the invasion and tells you how dire things are without directly showing you.

The dialogue is cornball, but what makes it brilliant is that everything is played straight instead of trying to be self-aware.  You can tell these voice actors are giving it all, which makes the one-liners like "Do you like death?  Then die!" that extra bit memorable.

I also like how we're never given a clear explanation as to who or what the Ravagers are.  All we know is they are a race of creatures bent on destroying Earth.  Some of the dialogue provides clues to their motivations, but the rest is left to the player's imagination.

Special mention must be given to Storm One, the EDF soldier you play as.  Storm One gives the likes of the Doom Slayer and Master Chief a run for their money with regards to his badassery.  He single-handedly takes down numerous waves of insects, mechs, spaceships, and even the mothership.  Plus, he can survive falls from thousands of feet in the air, physics be damned.

Where Earth Defense Force 2017 really shines is its simple but fun gameplay.

Earth Defense Force 2017 is as basic as it gets.  Each mission is straightforward: kill all enemies.  There are no escort missions, no stealth missions, no fetch quests, all you need is kill.  Its design is rudimentary, but there are a lot of nuances that give the gameplay an immeasurable amount of charm.

As Storm One, you can move, shoot, dodge roll, and jump.  There is no sprinting, so be ready to dodge roll to reach the next objective.  At the start, you only have a basic assault rifle and rocket launcher.  Killing enemies drops loot including armor, health, and weapons.

Remember, this game came out in 2007, two years before Borderlands popularized the idea of the looter shooter.  Some guns have special quirks, and weapons that might seem useless are useful for certain stages.  For example, the "Bound Gun" fires bouncing bullets, which are handy for the tight, cramped cave levels.

The game's 53 stages take you through cities to the countryside to the caves.  What's cool is how destructible these environments are.  Everything but the ground you're standing on can be destroyed.  Buildings, fences, cars, nothing is safe from the Earth Defense Force.  Any other game would penalize you for causing such wonton destruction, not the case here.  You can even murder your allies and get away with it.

Earth Defense Force 2017 features a varied selection of foes.  There are giant ants, giant spiders, mechs, gunships, dropships, a giant walking fortress, and a wannabe-Godzilla thrown in for good measure.  The game introduces new enemies at regular intervals to prevent the action from getting stale.  Certain creatures, like the walking fortress or not-Godzilla, act as boss fights, and they also highlight the game's massive scale.

The game does a great job at conveying scale.  Although there are only a handful of environments, each one is massive, allowing the developers to set missions in different parts of the map to give off the illusion you're somewhere new.  You frequently find yourself taking on massive groups of insects and other invaders, and it gives off the feeling of being David taking on Goliath, a small man facing a gigantic threat.

Earth Defense Force 2017 features five difficulties: Easy, Normal, Hard, Hardest, and Inferno.  Clearing the game on Normal or Easy means you beat the campaign on that particular difficulty.  Easy, Normal, and Hard aren't terribly difficult, but be ready to farm for armor to survive Hardest and Inferno.  The reward is worth it as beating the campaign on higher difficulties unlocks special weapons.  Going the distance and beating the game on Inferno unlocks the Genocide Gun, a weapon so powerful it makes the BFG-9000 it's bitch.

I should also mention Earth Defense Force 2017 is an excellent couch co-op game.  In an era where online multiplayer is the way to play, it's great knowing there's a series that champions split-screen co-op, including 2017.

As great as the game is, it is, pardon the pun, buggy.

The biggest crime is the lack of an autosave, which would be excusable during the PS2 era, but here, it's inexcusable. Picture this: you beat the game on Inferno and unlock the coveted Genocide Gun.  The next day, you boot up the game to test your grand prize, only to realize you forgot to save.  Cue the banshee yelling.

A handful of levels feature vehicles, including a speeder bike, a tank, a power suit, and a helicopter.  Except for the bike and the tank, the others are awful.  They're slow, they're sluggish, and trying to use them is a waste of time.  The bike is a glass cannon, but it's great for making a speedy getaway.  The tank controls decent enough, though the lack of an aiming reticle is distracting.

Finally, the AI isn't the brightest.  EDF soldiers can't hit the broad side of a bug and will gladly keep shooting enemies even when they're dead.  Ants and spiders like to roam away from the action, which makes sense, they are bugs, but it's not fun to roll around hunting for the few stragglers.

Earth Defense Force 2017 is both visually stunning and unappealing.  Textures are basic, animations are stiff, and though the framerate is stable 75 percent of the time, it turns into a slideshow the other 25 percent.  Also, physics do not exist.

When you shoot a spaceship out of the sky, it sinks through the ground.  Don't worry, this doesn't hurt you!  Shooting Hector robots causes their arms to spaz out, which is handy since their cannons won't harm you as much.  Killing insects causes their bodies to crumple, but their bodies are physical objects that you can't pass through, so you need to wait before they disappear.

Yet, there's something oddly appealing about the graphics.  What it lacks in polish, it makes up for with scope and ambition.  Sandlot is a developer that will gladly take so-so textures in exchange for cramming as much action onscreen as possible.

Although video game voice acting has come a long way, nothing will beat the majesty of Earth Defense Force 2017's dialogue.  This may be a game about shooting bugs and robots, but the actors treat the situation as serious as possible.

The EDF soldiers might be dumb, but they're armed to the teeth with one-liners.  The music is phenomenal.  It's a kitschy, B-movie soundtrack that feels right at home with the sci-fi/kaiju nature of the game.

Look past the generic box art, the muddy graphics, the lack of autosave, and you have a solid run and gun shooter.  The core gameplay is easy to pick up, difficult to master.  It's a game that isn't afraid to pit you against large hordes of enemies, knowing that if your trigger finger is on point, you will survive.

The game is rough around the edges and lacks many modern features, but all that doesn't matter considering how fun the action is.

Posted by William Lowery at 6:20 AM