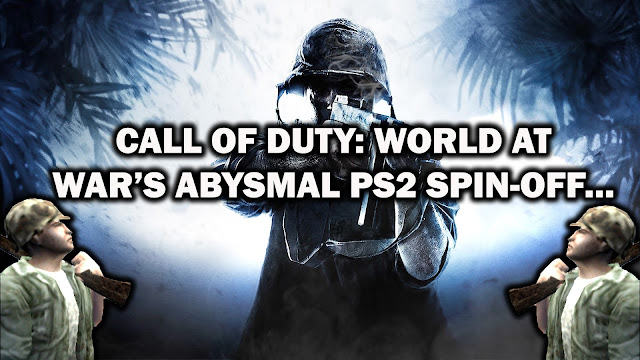 Last-gen ports of next-gen titles are an interesting specimen.  When a console reaches its twilights years, first-party companies opt to move on so they can focus on making games for their new systems.  This leaves third party publishers the job of supporting the old systems, usually by releasing ports of their next-gen titles.

These ports strike a chord with gamers because for some, this was the only way to experience the game since they didn't own any of the new systems.  They didn't care how the graphics looked or what features were missing, they were glad to have the new game on their favorite system.

What also made these last-gen versions remarkable was how different they were.  They shared the same name, but offered an experience tailored to the system it was made for.  Noticeable examples include the PS1 versions of Tony Hawk's Pro Skater 3 and 4, or in this article's case, Call of Duty: World at War Final Fronts for the PlayStation 2.

Released the same day as the Xbox 360, PlayStation 3, and Wii version, Final Fronts was billed as a companion piece to its big brother.  Development duties were handled not by Treyarch but by Rebellion, a studio with as many misses as they had hits.

For every Sniper Elite, Aliens vs. Predator, or Rogue Trooper, there's a Rogue Warrior, Shellshock 2, or The Mummy.  Knowing the studio's track record, Final Fronts could be a last hurrah for the PS2, or about as fun as committing seppuku.

Final Fronts loosely, and I mean loosely, follows the plot of World at War.  It features the Pacific and European theater, as well as the characters Miller, Polonsky, and Roebuck, but how the story plays out is where the two versions differ.

Beginning at a training camp in North Carolina, the game transitions to the Pacific, where the Americans are trying to stop the Japanese by way of an island-hopping campaign.

On the European side, you play as Gunnery Sergeant Alex McCall and Private Tom Sharpe, an American and a British soldier.  They're tasked with eliminating the dwindling German forces in Europe, as well as sabotaging whatever plans the Germans might have left.

Over the span of 13 missions, you push your way deep into enemy territory, overcoming unbeatable odds to stop the Axis menace.  Once the dust has settled, you ask yourself, was it worth it?

And by worth it, I mean, what exactly you were fighting for because Final Fronts' story is barebones.  It meanders about without any real stakes or sense of cohesion.  All the dark and grittiness of the HD version is gone and in its place is an atypical war story.

World at War was a tale of two different factions who shared a common enemy, an enemy who was determined to stop them by any means necessary.  It showed how war is hell and how it can transform a man into a cold-blooded killer.  There was no black or white, only a grey area where violence is the only solution.

The Pacific campaign in World at War followed Americans fighting an uphill battle with an enemy who used their wits and the environment to their advantage.  Men like Polonsky and Miller had no choice but to brave the jungles if they were to stop the enemy.  In Polonsky's case, he was forced to step up and lead his squad through hell and back.

None of this is present in Final Fronts.  In this game, Polonsky is a generic military man who doesn't seem stressed out about the enemy or the situation at hand.  The story lacks any sort of stakes of tension.  Characters are put into dangerous situations, but you never get the feeling any of them could die at any second.

Contrast that with World at War, which wasn't afraid to kill major characters to home in on the idea that in war, no one is safe.  The game is at its worst when it's trying to copy World at War's best moments, like the finale at Shuri Castle.

Instead of taking part in an all-out assault that culminates with you trying to bring down the castle, you run through corridor after corridor and fight off a few waves of enemies before the game decides you won, and the credits start rolling.

Things fare slightly better on the European front, but not by much.  The faceless Americans and British you tag along with have nothing on the mighty Victor Reznov, but these sections feel more focused and feature some set-pieces that, while not great, are better than what's in the Pacific levels.

The Final Fronts subtitle suggests it's about World War II's last days, but the game doesn't do much with the concept.  As soon as the European campaign is over, it's back to the Pacific for a crappy recreation of the Okinawa stages from World at War.  The game's three-hour campaign doesn't end with a bang, but a whimper.

It almost makes you wonder if the game was originally going to focus more on the "final fronts" of World War II, until Activision asked Rebellion to tie it in with World at War and gave them the budget of a ham sandwich to make the game.

Call of Duty: Final Fronts is functional but unexciting.  Everything works, but it feels so rudimentary, so basic, and cheap.  All the trimmings that made World at War refreshing are absent, and what you're left with is a subpar shooter where everything you do has been done before, and much better.

First, the good.  The controls are solid.  Taking a cue from its HD brother, holding down the iron sights snaps your aim to the nearest target, and it's incredibly responsive.  The gunplay works, plus it has the flamethrower, and you can't go wrong with the flamethrower.

Sadly, this is where the positives end because the game is littered with problems great and small.  The levels are linear and short.  There are no branching paths and very few opportunities to flank the enemy.  You move from corridor to corridor, trench to trench, killing enemies like it's a WWII-themed shooting gallery.

Most missions consist of destroying targets, clearing rooms of bad guys, or holding off enemy forces for a set amount of time.  It's insanely repetitive and the times you do get to do something different are few and far between.  Of the 13 levels, the ones set during the Pacific theater are the worst.

In World at War, fighting the Japanese was a whole new ballpark.  They staged ambushes, rigged up booby traps, and hid in the trees to snipe you.  It was a welcome change of pace from fighting Germans since their tactics were so different.  Here, they act like mindless goons.

They stand out in the open and shoot you, that's it.  Occasionally, they'll try to banzai charge you, but this attack lacks any threat because all it does is mildly hurt you, compared to World at War where you had a split second to react before your intestines were skewered.

They do spring up from spider holes, but only once.  Their behavior is about the same as the Germans, but at least the Germans remembered how to use cover.  In general, the AI is terrible.  I saw enemies run around in circles, tiptoe out in the open during heated firefights, and allies shoot at walls instead of the threat in front of them.

The only positive is enemies are nowhere near as grenade happy, but this doubles as a negative since you can hide behind a piece of cover and pick them off with ease.

Even the weapons feel downgraded.  Final Fronts is rated T for Teen, so the blood and guts are absent.  That's not the problem.  The problem is all the guns feel the same.  There's very little reason to swap out firearms because they function alike, plus the ammo count is ridiculously high, so ammo management isn't much of a concern.

Guns that were in World at War like the flamethrower feel less like an ultimate tool of destruction and more like a plastic toy.  The flamethrower has all the power of a fart, and the bad graphics make it look like you're spraying Cheeto dust rather than roasting things.  You have smoke grenades, but there's not much of a point to using them give the dumb behavior.

The European campaign isn't as boring, but that's like saying getting stabbed is better than being blown to bits by a grenade.  Sprinkled amongst the routine shooting sections are scripted sequences where you run from a tank or launch an ambush after detonating an explosive with the sniper rifle.  You even get a tank level.  It's on-rails, yes, but anything is better than shooting wave after wave of goons.

In addition to its weak gameplay, bad AI, and paint by numbers design, the game is short, real short.  I died a handful of times and even then, beating the campaign took barely three hours.  This would be excusable if there was extra content, but there isn't.

There's no multiplayer, no zombies, no Ukraine girls knock me out mode, nothing.  You could replay the campaign on a higher difficulty, but don't expect much of a challenge on either Normal or Veteran.  Previous Call of Duty's featured multiplayer and bonus features, not to mention better gameplay.  The fact this package is so barebones is kind of insulting.

Graphically, Final Fronts is not a looker.  Character models are basic and blocky, the framerate frequently dips and hitches, and some of the levels look like they came from a PS1 game.  The weapon and reload animations look decent, but that's because this game runs off a modified version of the Big Red One engine.

On the plus side, the glitches are amazing.  Enemies tend to ragdoll like crazy before becoming lifeless and during this intense escape from an occupied town, this happened.

The voice acting is alright, but the sound mixing makes it hard to tell what the characters are saying.  Kiefer Sutherland reprises his role as Polonsky but sounds incredibly bored.  Though if you ever wanted to hear Nathan Drake or Crypto from Destroy All Humans do a British accent, try Final Fronts.

Call of Duty: World at War Final Fronts is abysmal.  As a companion piece to World at War, it doesn't add anything interesting to the source material.  Setting the game during the war's final days could have made for an interesting experience, but what we get is a formulaic shooter that's also a poor imitation of its HD brethren.

The gameplay is stale, flat, and though there's the occasional flash of promise, it's quickly buried beneath the repetitive objectives and bland shooting.

Final Fronts' quality is shameful considering previous Call of Duty games on the PS2 featured more content and better production values.  The whole product feels like a knock-off made by Majesco, not something released by Activision for 40 bucks.

Those morbidly curious to see how a game like World at War translates to the PS2 are better off trying out the Wii and DS versions.  At least with the Wii version you get the original campaign, minus one level, while on DS, you get Pacific, Russian, and British campaigns, not to mention it's on the DS, the real man's way of playing Call of Duty.

If you want a good PS2 World War II shooter, play Call of Duty 2: Big Red One or Medal of Honor: Frontline.  If you want to learn more about WWII history, visit a museum or read a book.  Either of those options is better than playing Final Fronts.

Posted by William Lowery at 3:54 AM