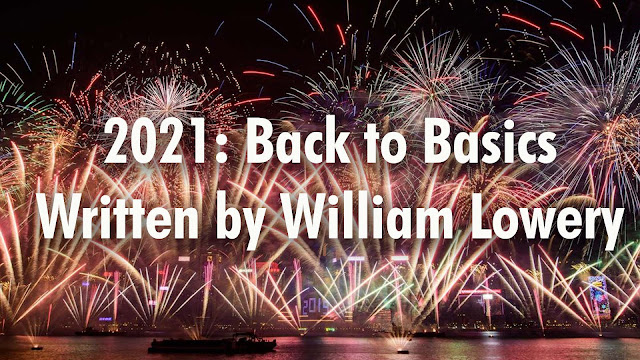 Joe Jackson once sang "Sometimes you keep busy reaching out for something...You don't care, there's always something there," which describes myself during 2020.  I tried running a website, a YouTube channel, and doing collabs, with not much success.  I was really distracting myself from deciding what I was going to do with my life.  The covid pandemic messed up everyone's lives, including mine.  Instead of outlining a new plan, I sat on my ass and tried to look busy.

As the end of 2020 loomed on the horizon, I decided to get my life back on track.  I got a job and began rethinking my plans, including what to do with GamerGuy's Reviews.  2020 marked the blog's five-year anniversary, and I did not do anything creative to celebrate the milestone.  I put all my eggs into Will and Matt's Excellent Podcast, which was a big mistake.  I decided to can the show, a decision fueled by waning interest and a falling out I had with the co-host.

2021 was a step in the right direction.  While there were a couple of missteps, I am satisfied with how the year turned out.  Time to reflect on the good, the bad, and my plans for 2022.

I wanted to refocus GamerGuy's Reviews since I felt it had lost its identity.  It looked less like a gaming blog and more like a dime-store IGN.  My goal was to keep it simple but varied.  While I wished I had put out more articles, I'm proud of the ones I wrote.  The focus was on video games, but besides reviews, there were franchise retrospectives, a console retrospective, and an opinion piece on licensed video games.  I challenged myself to get out of my comfort zone and it was a fair attempt.

Of all the things I wrote, the highlight was the interviews.

I did a few in 2020 to test the waters, and the positive feedback encouraged me to do more for 2021.  Doing interviews is a great way to learn more about how our favorite games are made and what drives people to keep going, even when a project does not turn out as intended.  Some of these stories genuinely surprised me, and I think its important gamers know more about what goes into the making of games beyond what we see put out by major gaming sites.  I slacked off on the interviews in the second half of the year, but rest assured, interviews will be back in full force.

Writing about the Mississippi Comic Con was another higlight.  When they announced the convention would return this year, I decided to write about the event.  I did it to see what a convention would look like post pandemic, and to promote my content.  I printed 200 business cards to pass out and gave away at least 75.  It felt surreal to be attending a public event with thousands of people, but I had a blast.  I plan on attending next year's event, and who knows, maybe I will have my own booth.

What I did not plan on was seeing GamerGuy's Reviews hit a big milestone.  In August, the website crossed 50,000 views.  I never expected the site to hit that number, but I'm glad it did.  There are two reasons why I believe this happened.  The first is because of the interviews.  My reviews get anywhere from 50 to 200 views, whereas the interviews were pulling in at least 2,000 views.  The second reason is how I share my content.  When I started, I was only on Facebook, but in a few years, I got a Twitter account, then a Reddit account.

For all the right I did, there were a few wrongs.

I missed a lot of deadlines.  There were a lot more games I intended to review, and while I played them all, I never wrote their reviews because I couldn't muster the energy to do so.  In some cases, I was crunching time to get them done, especially the games I had intended to review in October.  Plus, all the interviews I planned for the rest of the year were scrapped.

Missing deadlines has been a problem for me since I started this blog.  It's hard to write when real world things like school, work, or any personal problems get in the way.  Going forward, I want to miss very few deadlines as possible.

Next year, GamerGuy's Reviews is coming to YouTube.  I had planned on returning to YouTube this year, but I nixed the idea once I realized how inadequate my equipment was.  A Macbook Pro is great for writing papers, but terrible for producing videos.  I sold my Macbook, got a desktop computer, and an 8 TB hard drive to store everything on.

Besides reviews, there will be interviews and video specials.  My goal is to put out two to three reviews a month, and at least one interview a month.  Specials are large scale projects that require a lot of time to plan out, script, assemble, the release.  I can't say much about what I'm working on, but what I will say is this summer, look forward to a three-part documentary on the Destroy All Humans franchise.

My long-term goal is to make the YouTube channel the permanent home of GamerGuy's Reviews, with a website to house all my old and new content.  I've been using Blogger since 2015, and I'm long overdue for an upgrade.  Blogger is great if you're a writer starting out, but if you're looking for something with more meat, there are better options.

Hunter S. Thompson once said, "Buy the ticket.  Take the ride."  These words resonate with me because six years ago, I decided to start a blog and write game reviews on it.  If I hadn't made the decision, I wouldn't have experienced the journey that was running GamerGuy's Reviews.

I've decided to buy a new ticket for 2022, one which will take me on a ride to who knows where.  I'm 25 years old and out on my own.  Returning to YouTube is a gamble, but a gamble I'm willing to roll the dice on.  The difference between then and now is I'm prepared with a full deck of cards instead of half a deck that's missing the King of Hearts, the Queen of Diamonds, and the Ace of Spades.

If I want to succeed, I need to take risks, and many of my favorite YouTubers got to where they are because they took risks.  One of my biggest influences is James Rolfe, creator of the Angry Video Game Nerd.  Rolfe said those early video were meant to be a one-off series, but when his best friend Mike Matei encouraged him to upload the video to YouTube, he did, and now, his series is considered of the greatest.

His videos showed if he could talk about games, so could others, but the reason he stood out was his style was original and fresh.  It's easier than ever to make a video review, but technology only gets you so far.  You need a voice.  If you don't have one or just chase trends, you'll fall by the wayside.

Posted by William Lowery at 6:16 AM No comments: