This weekend I redesigned my entertainment room.  What was once a cluttered mess of shelves is now a tidy little room that houses my gaming and movie collections.  This room has gone through many iterations, and it all stems from when I was 12 and decided to collect games.  Fast forward to now, and that dream has come true.  But first, a little history.

I didn't play a lot of games growing up.  My parents were strict on what I could play and for how long.  Because of this, the only system I owned was a PlayStation 1.  I had a handful of games for it and played it whenever I visited my mother on the weekends.  I missed out on the PlayStation 2, the Xbox, the Gamecube, and all the excellent games kids my age were playing.  That changed in Christmas 2008, when I got a PS2 and our family got a Wii.

Upon getting the PS2, I started buying games with whatever money I earned from doing chores and other odd jobs.  It was exhilarating to finally own games I didn't have access to, or briefly experienced at either a friend's place or a gaming kiosk at a department store.  Around 13 or 14, I decided to start collecting games for the systems I had.  Any games I got went on a bookshelf in my bedroom.  It wasn't much, but I felt satisfied knowing I had a shelf filled with games I owned.

By age 17, I decided I wanted an entertainment room.  I owned a PS2, a Wii, and an Xbox 360, plus I had all my original PS1 games.  Using the handful of shelves I had gotten from family members, I arranged them in a way that allowed me to show off my collection.  Sadly, I don't have any photos of the original room, so this is based on what I remember.

The idea of making such a room was the result of watching too much YouTube.  Seeing the massive collections certain YouTubers had made me think, "Imagine if I had my own space to show off my stuff, that'd be awesome!"  The problem was I was deathly afraid of working.  No job meant no money.  Financial responsibility was an alien concept to me.

That changed when I graduated from high school and got a job working at Little Caesars.  Now that I had a bank account and understood the basics of saving, I could use the cash to afford more shelves for my bedroom.  Being a fledgling college student, said shelves came from the local thrift store, but I was proud.  Over the years, I built up my movie and game collections, adding new systems and new titles.

By 2021, it was time for an upgrade.  The layout of my room had been unchanged for six years, and as the years went by and the collection expanded, it was creating problems.  Nothing says fun like shuffling stuff around to make room for more stuff.  At the beginning of the year, I made a list of goals, one of which was to redesign my room.

After months of working and saving up, I had enough cash to buy new furniture and get rid of the clutter.  I took down all the tapes, DVDs, blu-rays, and games I had acquired, put them into boxes, and moved the old furniture out.

Out with the Old, In with the New 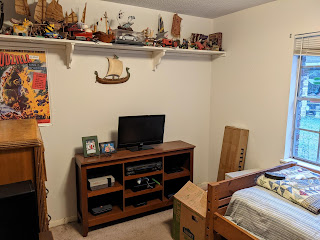 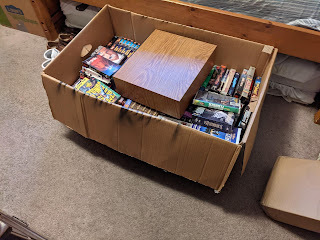 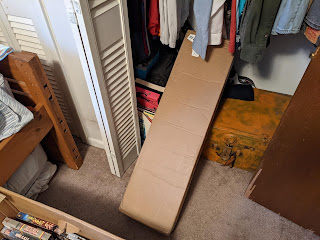 I found the new TV stand out of sheer luck.  I work at a Salvation Army thrift store and when it was dropped off I thought, "That's exactly what I'm looking for!"  I ordered the new shelves and dresser off Amazon.  Once everything arrived, I got to work.

Building the shelves was a hassle.  With very little wiggle room, I had to be extremely careful putting the shelves together.  I nearly went mad, but I was able to finish them and save my sanity.  The "fun" part was then restocking them with all the games and movies I owned.

As I was making my way through the VHS collection, I realized I owned way too many tapes.  I had built up a sizable VHS collection during my college years.  When you have money, but not a lot of it, a VHS collection can come in handy.  They're cheap, plentiful, and there's a charm to watching movies on an older format.  However, VHS takes up a lot of space, and nearly all the shelves I owned were filled with tapes.

I decided to separate the essentials from the nonessentials.  I boxed the nonessentials up and took them to a thrift store the next day.  I also made a new rule for myself: no more tapes.  I like VHS, but I have enough tapes.  For some, one is too many and a thousand is never enough.  For me, I'm satisfied with what I own, and I'm not in a rush to fluff it with movies I may rarely, if ever, watch.

I got frames for my Godzilla 1985 and Return of the Living Dead Part II posters and hung them up.  A few extra adjustments here and there, and my redesigned media room is complete. 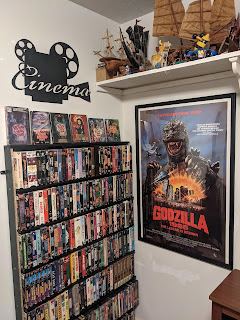 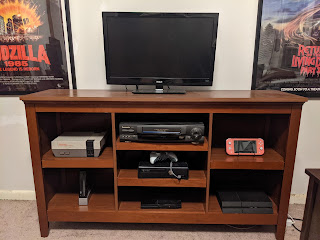 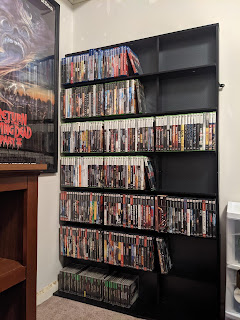 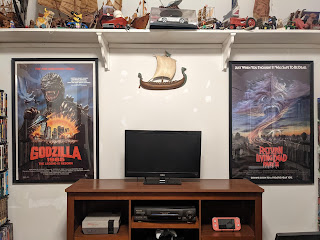 Building Better Rooms
I love my new media room.  It looks great and is a lot more organized and less cluttered.  It's bound to change, especially if I move out and get my own place, but I love it.
To close out this post, here's a few quick tips for those looking to design their own gaming/entertainment room:
1. Know What You Want
2. Design Your Layout
3. Have the Tools, Have the Talent
Posted by William Lowery at 6:12 PM