Then and Now: Resident Evil 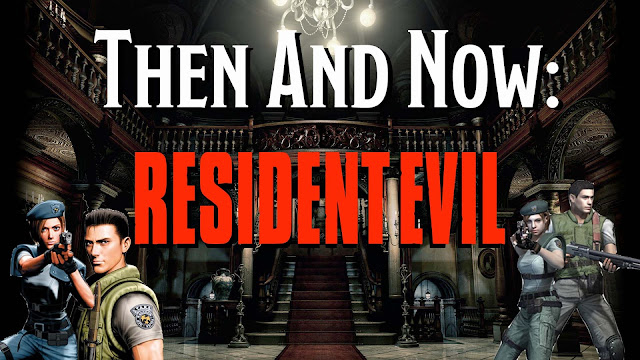 2021 marks the 15th anniversary of Resident Evil.  What was conceived as a spiritual successor to the Famicom game Sweet Home became the franchise that defined survival horror.  It spawned sequels, spin-offs, movies, novels, and more.  It taught gamers about the healing power of herbs, and how boulder-punching isn't a skill, but a way of life.  My introduction to the series was through Resident Evil 4: Wii Edition.  Resident Evil 4 balanced terror with action and popularized the over the shoulder perspective.  The result was a fantastic game made better by the pointer controls of the Wii remote.

This was back in 2014, back when I was a stupid teenager afraid of earning money through something called "work."  Five years later, I acquired the first three Resident Evil games for the PlayStation and was able to experience the series' roots proper.  For my first annual Arcade of Terror, I'm covering the original Resident Evil's and their respective remakes.  Resident Evil may be a long-running franchise, but its stories have been retold more often than once.

Mysterious murders outside Raccoon City result in the STARS Bravo team being sent out to investigate.  When nothing is heard back, STARS Alpha Team is sent to find answers.  Turns out Bravo team's chopper crashed, and nearly everyone was killed by grotesque-looking hounds.  Alpha team is ambushed and retreats, but their helicopter pilot panics and takes off.  Left alone in the woods, they seek shelter at a mysterious mansion.  Turns out the place is infested with an assortment of monsters, all the result of secretive experimenting by the Umbrella Corporation.

Resident Evil's story plays out like a video game version of Night of the Living Dead.  A small group of survivors are stuck in a house and need to find a way out.  How the story is told is where the original and its remake differ.  Resident Evil on PS1 is like a cheesy B-movie.  It tries to scare you, but you're more likely to die from laughter than shock.

The voice acting is amazingly awful.  Dialogue is delivered with the gracefulness of someone trying to read a script written by aliens.  Everyone and their mother have talked about "Chris' blood!", "Jill Sandwich," "I'm Rebecca Chambers," and all the other lines that have been quoted to death.  The live action opening sequence piles on the cheese by featuring a bunch of nobodies dressed as the main characters fighting off what looks like Muppets from hell.

That's not to say Resident Evil is a total laugh fest as there are some genuinely creepy moments.  One of my personal favorites is the art room with the crows.  Seeing them perched above, waiting for the chance to swoop down and attack is quite nerve-inducing.  Then, there are the hunters, bi-pedal lizards with huge claws that show up at the halfway point.  Just when you think the mansion is safe, hunters show up to slice your head off.

Notes and journals you find give an insight into how things were before the outbreak happened.  Guards and technicians describe the shady activities of Umbrella and clue you into the state of things before their demise.  As the game progresses, you discover the corporation is up to no good and one of your own is a backstabber.

Spoilers for a 25-year-old game, but Albert Wesker, Alpha team's captain, is in cahoots with the company.  He sicks the Tyrant on the heroes as a last-ditch effort but is killed by his own creation.  After hours of puzzle solving and exploration, the game climaxes in spectacular fashion as the player kills the Tyrant and escapes the mansion before it explodes.  Depending on your decisions, certain characters might survive or not.

Resident Evil's remake keeps the story but ditches the unintentional comedy for pure horror.  The game's atmosphere is dense with a capital D.  The mansion is turned into a Gothic manor, complete with a cemetery area, lots of lightning, and lots of fog.  Excellent sound design adds tension as you explore the house and hear moans coming from unseen places.  The plot plays out the same, but there are a few changes.  For example, Richard Aiken, a wounded Bravo team member, can be saved if you're fast enough, compared to the original where he dies no matter how long you take.

Another addition is in the form of Lisa Trevor.  Lisa Trevor was a family member turned test subject by Umbrella.  Injected with the Progenitor virus, she became a grotesque creature that stalks the halls of Spencer Manor.  Diaries detail her family's attempt to save Lisa, only to be executed by Umbrella.  She may be a grotesque creature, but you feel sympathy for her when you realize this was done against her will.  If the original Resident Evil is like a Universal monster movie, the remake is like the Hammer Studios version, darker, a little more violent, a little more Gothic.

Resident Evil on PS1 crafted the survival horror formula, and the remake flavors up the concoction to make it more irresistible.  The goal is to escape the mansion and uncover the truth.  To do so, you'll complete puzzles, unlock doors, and try to survive the tank controls.  Instead of using a traditional set-up, the original Resident Evil games use tank controls.  When you push the analog stick forward, the character moves forward.  To move left or right you need to tilt the analog stick in the direction you want to go then move the stick forward.

At the start, you are given the option to play as either Chris Redfield or Jill Valentine.  Both characters have strengths or weakness.  Jill has eight inventory slots, gets access to a grenade launcher, and is the master of unlocking thanks to a lockpick she receives near the start.  Chris can take more damage and has a lighter.  The drawback is he only has six inventory spaces, not to mention he can't do a lot of puzzles without help.  First-time players will want to start with Jill since she's technically the game's normal mode.

Inventory management is important because resources are limited, as is the space to carry items.  It's smarter to try and run around zombies instead of shooting them.  You'll save ammo and in the case of the remake, deciding whether to burn bodies, more on this later.  Despite being labelled survival horror, Resident Evil is more akin to an adventure game.  The emphasis is on puzzle-solving and item finding rather than combat.  Nearly every door requires a key to open, and while Jill can open some with her lockpick, Chris needs to rely on keys if he wants to get anywhere.

Resident Evil does not hold your hand.  Expect to ask yourself, "Where do I get next?" more than once.  You're given clues about where to find things, but not always.  The challenge comes not from combat, but from keeping track of your progress.  The remake alleviates the frustration by marking rooms as cleared once you've nabbed every item.  Plus, part of the satisfaction from playing Resident Evil is your increased familiarity with your surroundings, helpful on future playthroughs.

However, the remake throws many curveballs at those familiar with the PS1 game in the form of new areas, as well as redone puzzles and mechanics.  In the original, when a zombie dies, they stay dead.  In the remake, zombies are dead temporarily.  After a while, they return as crimson heads, which are faster and vicious.  To ensure they stay dead, you need to burn them or blow their head clean off with a headshot.  Kerosene fuel is limited, so either try for the head or get around them.

Zombies aren't the only thing to worry about.  There are also crows, zombified dogs, hunters, a giant snake, giant spiders, and a giant snake for good measure.  The crows aren't much of an issue, but dogs can gang up on you if you're not careful.  Spiders aren't a threat or a nuisance, but an inconvenience.  I never understood why people found them scary since they're easy to run by and only once are you required to one on mano a mano.  If you get hurt, use herbs and first aid sprays.

While Resident Evil's puzzles will flex your noggin, the boss fights won't.  Most of them can be defeated by standing in a corner and unloading ammo on them.  The sharks are the exception since you must drain the flooded hallways to render them useless.  It's even possible to kill the giant plant in the guardhouse by concocting a special serum.  The final fight against the Tyrant is a bit of a hassle, but if you keep at least one or two healing items on you, you'll be fine.

When the game is beaten, you earn a rank based on how long you took and how often you saved.  If you're good enough, you can earn the coveted A rank or S rank.  Getting a high rank rewards the player with new weapons and alternate costumes.  When the remake was re-released on HD consoles, extra outfits were added to provide extra incentive for replaying the game.  This version also includes the option to swap between tank controls and traditional controls.

Visually, Resident Evil on PS1 looks dated but the visual style has held up.  The pre-rendered backgrounds mixed with 3D character models give the game an old fashioned but timeless appeal.  On the other hand, the remake looks gorgeous.  Two decades later and the graphics have aged spectacularly.  I played the Wii port and even on a lower resolution the visuals hold up.  The mansion is beautiful in a macabre sense.  Every hallway, bedroom, and lab are drenched with detail and the game makes great use of shadows.

Voice acting in the PS1 original is amazing.  That is all.  While the remake has better performances, all the magic is gone.  When Resident Evil received a Director's Cut re-release, a new soundtrack was composed.  The music is good, but some of the compositions sound like someone farting on a Casio.  Then again, the composer was allegedly deaf, until it was revealed he had been faking it the entirety of his career.  The remake relies more on ambience, which adds to the creative factor.  Footsteps echo through the mansion's halls and the distant pounding of a door or window keeps you alert.

Resident Evil is a solid game.  While the PS1 title is dated, the game's unintentionally campy tone and challenging gameplay keeps you drawn to the experience.   The remake plays it straight and serious.  The game feels like survival horror and not in an ironic way.  The redone mechanics turn the first entry into a more contemporary experience that still finds ways to surprise gamers.  If the PS1 Resident Evil is a theme park haunted house, one where the scares make you laugh, the Resident Evil remake is a legitimate haunted house, one where the horrors toy with your mind.

Posted by William Lowery at 7:15 AM