From Script to Ink: Don Calfa's Revenge of the Living Dead 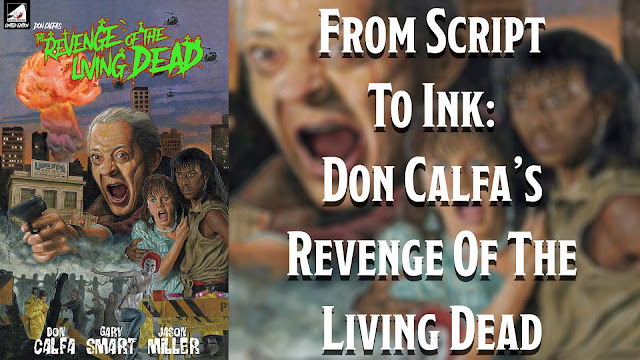 Return of the Living Dead is one of those topics where once you get me started, I don't stop talking.  What was once a movie that scared me as a 12-year-old became one of my favorite horror movies.  Yet, none of the sequels matched the original.  Part II was decent if uninspired, while Return of the Living Dead 3 tried and failed to make us sympathize with a boy and his not so dead girlfriend.  The less said about Necropolis and Rave to the Grave, the better.

For 16 years, the series has laid dormant.  While there has been a plethora of merchandise, from t-shirts to posters to barbeque sauce, no one has attempted to resurrect the series.  This is because of a legal snafu between the family of the late Tom Fox and the producer behind the later, made for TV installments.  That hasn't stopped people from pitching their own ideas, including those who worked on the movies.

Don Calfa, who played the mortician Ernie, teamed up with writer Roger Carney to pen a treatment called Revenge of the Living Dead, which picked up moments after the ending of the original.  While writer/director Dan O'Bannon loved it, producer Tom Fox wasn't interested.  It sat on the shelf for decades until it was turned into a graphic novel by Dead Mouse Productions, the studio behind the upcoming RoboCop documentary RoboDoc.

In Revenge of the Living Dead, the nuclear blast that was meant to eradicate the zombie outbreak in Louisville missed its target.  Burt is killed by falling beams, so Spider, Casey, and Chuck head back to the mortuary, where Ernie and Tina are trying to hold off the zombified Freddy.  Tina spikes him with embalming fluid, which renders him docile.  Meanwhile, Colonel Glover is ordered by the higher-ups to contain the outbreak and find the Trioxin barrels stored at the Uneeda warehouse.

I say this ironically because there are a lot of similarities between the two.  As mentioned, the action is set in the city, and the military has quarantined the town to ensure nothing escapes.  There's also a heavier emphasis on comedy.  Many background zombies are modeled after famous people.  Keep an eye out for zombified versions of George Romero, Dan O'Bannon, William Stout, and even Bernie from Weekend at Bernie's.  The comic even has its own versions of the severed head and severed hand scenes, the former of which sees Tarman chasing the cast around the warehouse while holding on to his head.

The difference between Return of the Living Dead Part II and this comic is everything is played straight instead of for laughs.  The situation is treated seriously and the undead feel like an unstoppable threat instead of a slapstick brigade like in Part II.  However, the comic makes the same mistake the second movie did by relying on too many callbacks to its predecessor.  A lot of the dialogue is re-purposed from the original.  For example, after giving a report on the situation in Louisville, a fighter pilot tells Glover that "They'll be home in time for Ethel's lamb chops."

What's most surprising about Revenge of the Living Dead is how Ernie is now the man in charge.  With Burt incapacitated, Ernie steps up to the role of leading man, and his knowledge of dealing with the dead becomes quite useful, especially with handling Frank and Freddy.  Frank didn't quite burn himself to a crisp as we thought, but it did leave half his face scarred up.  Using his embalming skills, Ernie turns the two into sharp-dressed corpses and holds off their brain cravings with embalming fluid and formaldehyde.

Ernie becoming the hero was likely influenced by how actor Clu Gulager and director Dan O'Bannon argued on set, so he was written out for the sequel.  Although killing Burt at the beginning highlights the fact that in Return of the Living Dead, no one is safe.  Ernie calls all the shots, while Spider acts as his right-hand man.  On the military side, we get to spend more time with Glover as he tries to find the barrels and clean up the mess.  New characters like General Mainwaring are thrown into the mix to not only bark orders at Glover, but to become brain food for the zombies.

Revenge of the Living Dead carries on the idea that the military are utterly incapable at handling major disasters.  Squads of biohazard teams and troops are sent into deal with the threat only to get annihilated.  When they start using flamethrowers on the ghouls, it only spreads the gas and infects the citizens they're supposed to be trying to help.  Soon, news reporters see what's really going on, and it's only a matter of time before the pot boils over for Glover and company.

While I like the new characters, none of the main cast, save for Ernie and Spider, get much development.  Tina and the rest of the gang act about the same as they did in the original; in other words, panicking their butts off.  Revenge of the Living Dead could have benefitted from an unexpected curveball like killing off another one of the punks.  None of them get harmed during the adventure.  At one point, Casey panics and leaves the guys behind, but before they get overwhelmed, she changes her mind and goes back to save them, and everyone escapes intact.

Revenge of the Living Dead's art style is colorful and cartoony.  It reminds me a lot of The Real Ghostbusters with how the characters look sort of but not quite like their film counterparts.  Ernie looks more like a chiseled tough guy, square jaw and all.  Frank bears no resemblance to James Karen, though since half his face is gone, it's excusable.  The artwork even references some of William Stout's zombie designs.  While some might find the cartoony redesigns off-putting, you quickly get used to it.

Revenge of the Living Dead is an interesting case of what could have been.  It picks up immediately from the first and takes the story into a new direction, while increasing the action and gags.  To put it this way, this comic is the Aliens to the first movie's Alien.  The best part about the comic is how it makes Ernie the protagonist, and had it been made into a movie, it would have allowed the late Don Calfa to go all out and become a hero.  This comic doubles as both an unofficial sequel and a tribute to the late actor's work.  If you can track down a copy, check out this comic for the sequel that never was.

Posted by William Lowery at 5:58 AM