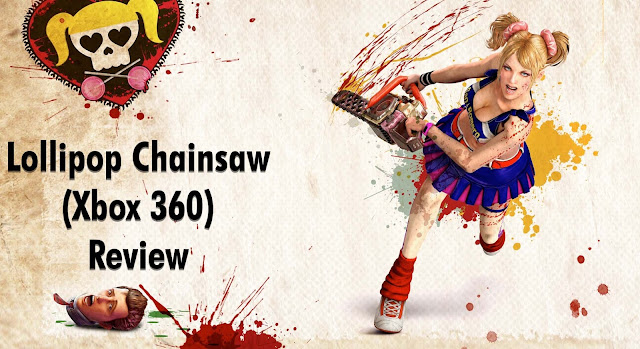 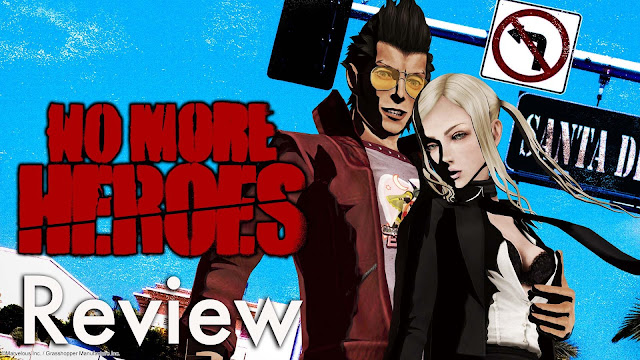 Editor's Note: This game was previously reviewed in 2015.  However, that review is outdated and horrible.  Consider this a "Revisited" on No More Heroes.  You can find the original review here.

In a world inundated with sequels, prequels, and reboots, it's challenging to sell consumers on a new idea, regardless of what the concept is.  However, a new video game console is the perfect opportunity for developers to sell people on their new property, as well as drum up attention for the system.  By late 2007, the Wii was dominating the console market, selling 5.84 million units at the end of 2007.  Yet, its focus on the casual market combined with the plethora of shovel ware made hardcore gamers wary.  That changed in 2008 when developer Grasshopper Manufacture and publisher Ubisoft released No More Heroes, a game where you kill guys and jack off a lightsaber.

Travis Touchdown is an otaku who spends his time sitting on the toilet instead of working a job.  He buys a beam katana off the internet, a decision that leads him to a duel with a man named Helter Skelter.  Killing him makes Travis number 11 on the ranking board of the United Assassins' Association, UAA for short.  The organization's leader, Sylvia Christel, promises Travis that if he fights his way up to number one, he'll be crowned the winner.  Travis accepts, with the bonus of getting to sleep with Sylvia if he succeeds.

No More Heroes is a wild game.  It's violent, bloody, lewd, and crude.  The hero is a guy who wants to make it to the top not for the desire of power or wealth, but to have sex with a woman.  The ranked assassins Travis duels are colorful individuals that come off as crazy yet sensible.  For example, Destroy-Man is a mild-mannered mail carrier turned incredibly egotistical superhero.  Shinobu is a katana-wielding high-schooler who wants revenge because she believes Travis killed her father.  The characters are absurd, but everything is played straight, and it rides the fine line between ludicrous and grounded. 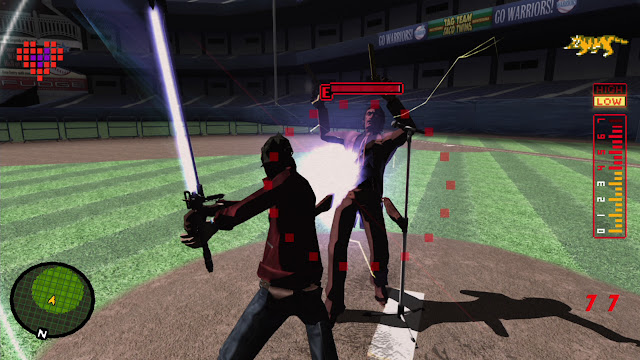 Boss fights are fun and require looking for windows of opportunity to lay damage on them.

While No More Heroes is clearly inspired by the works of Takeshi Miké and Quentin Tarantino, it also reminds me a lot of the movie Repo Man.  Both follow a punk protagonist who gets caught up in an unusual line of work.  In No More Heroes, it's the job of being an assassin, whereas in Repo Man, it's the job of repossessing cars.  Otto's job leads him to encounter a variety of colorful individuals and get entangled in a government conspiracy involving a Chevy Malibu.

Meanwhile, Travis' job leads to him cutting off a lot of heads and meeting some interesting folks along the way.  Repo Man is odd yet at times philosophical, with characters waxing about the lattice of coincidence, same goes for No More Heroes, where characters mediate on things like death and finding paradise.  The town of Santa Destroy is a place with few opportunities, like how Los Angeles is a decrepit city where the only jobs give you room to move...as a fry cook.  I guess you could say No More Heroes is the Repo Man of video games.

At the center of it all is Travis Touchdown.  He's equal parts brash, badass, and goofy, but he's determined to reach the top.  As much as No More Heroes is about fighting unusual characters, it's also about going through the daily grind to achieve success.  Success doesn't fall in your lap.  It takes hard work, perseverance, and the desire to push yourself.  Every first rater started as a third rater and worked their butts off.  Travis is trying to do the same, albeit in the name of sex.

No More Heroes' gameplay is a mixture of open-world exploration, hack and slash combat, and odd job simulator, resulting in a concoction that's weirdly addicting.  To move up the ranks, Travis needs money.  Each ranked fight requires an entry fee to be paid.  The higher the ranking, the higher it costs to get in.  The main way to earn cash is to do jobs and complete contracts. 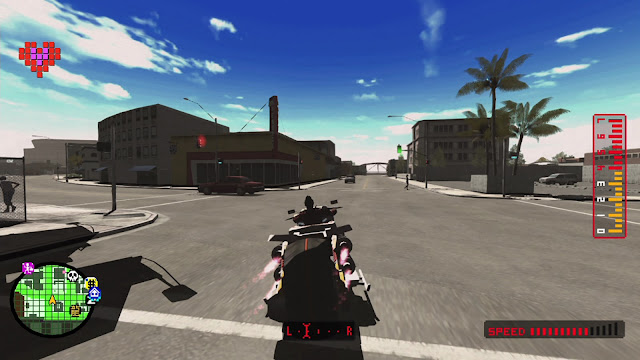 Santa Destroy is "bustling" with activity.

Jobs are picked up by visiting the job center.  New jobs become available as you progress.  You'll mow the yard, collect coconuts, rescue cats, and perform dangerous stunts to earn cash.  Once a job is complete, you earn the chance to complete a contract from K-Entertainment, a hitman's association. Contracts see Travis either killing a specific target or eliminating a group of bad guys under certain parameters like melee only.

That's the basic rhythm of No More Heroes, but there's a lot more to do besides killing and capturing scorpions.  As the game progresses, new businesses become available for Travis to visit.  The Thunder Ryu gym lets you work out to increase your strength and stamina.  Beef Head Video sells wrestling tapes for Travis to watch and learn new moves from, and Dr. Naomi's lab is where you go to buy new beam katanas and upgrades.  Scattered across Santa Destroy are Lovikov balls.  Find seven of them, and you learn a new technique from Randall Lovikov, a drunk Russian who hangs out at the bar.

Additionally, if you're in need of a little extra spending money, you can go dumpster diving to find cash or shirts.  Alternatively, there's the free fight missions, optional encounters that involve eliminating enemies without taking damage.  I only recommend doing them once you're intimately familiar with how combat works.  On that note, let's talk combat.

Despite being on the Wii, the fighting makes good use of button presses and motion gestures, resulting in a satisfying combat system.  Tapping the A button swings his beam katana but tilting the remote up and down makes him shift between a high and low fighting stance.  When an enemy is weak enough, you finish him off by swinging the remote in whatever direction the game indicates.  Pressing the B button initiates a melee attack that can stun an opponent and leave him vulnerable to a wrestling finisher, at which point you need to swipe the remote and nunchuck in the prescribed direction. 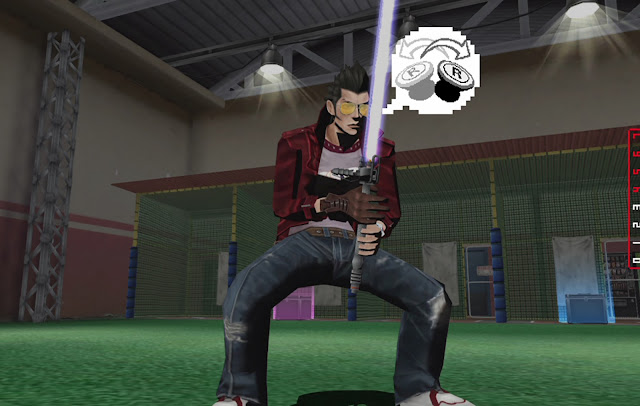 Killing an enemy makes a slot machine reel appear on the bottom of the screen.  Getting three matching icons triggers one of five Dark Side Mode variants.  "Strawberry on the Shortcake" boosts Travis' speed and lets him one-hit kill enemies.  "Blueberry Cheese Brownie" lets him shoot energy blasts out of his katana.  "Cranberry Chocolate Sunday" turns him into Darth Travis, where opponents fear him and he's able to finish them off with ease.  "Anarchy in the Galaxy" nets you a special bomb that kills all enemies in the vicinity.  Finally, "Cherry" slows down enemies' movement speed, letting Travis score multiple hits.

Using the beam katana drains the battery.  If it runs low, you need to recharge it by pressing 1 and shaking the Wii remote.  Just remember to not shake it too hard, or you'll go blind.  I prefer to use quick, precise shakes, edging the energy bar all the way to the top.

As fun as the combat is, the sandbox feels empty.  Its only purpose is to connect the key locations together, and aside from looking for hidden goodies, you'll find yourself speeding from one location to the next to get things done quicker.  It's a shame because Santa Destroy is a large locale, and there was untapped potential.  Too bad No More Heroes 2 jettisoned the open world.

Some might grow tired of the constant loop of "Work, Save Up, Kill, Rinse and Repeat."  I never became bored of doing the odd jobs and contracts, simply because I knew the pay-off was another ranked fight.  There's a satisfying sense of progression as you unlock new moves, weapons, and increase Travis' strength.  You feel like he is getting stronger and more confident in his ability as an assassin, and that he's willing to take on what lies next. 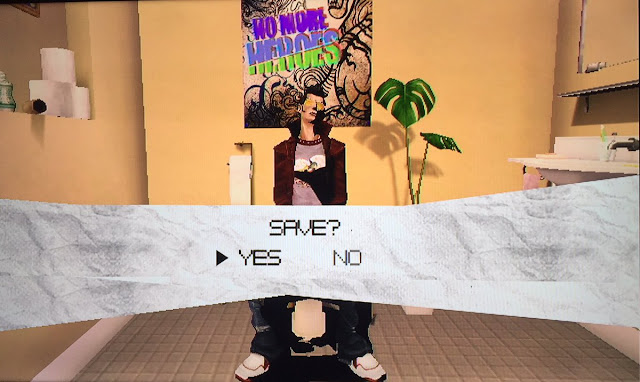 No More Heroes' cel-shaded look is distinct and plays to the strengths of the Wii's less-than-powerful hardware.  Character models are solid and cut-scenes are well-directed.  Environments are flat and basic, and the short draw distance and scant number of pedestrians only serve as a reminder of how barren Santa Destroy is.  There's also some wonky collision detection.  Travis' motorbike can run down trees, but patio furniture sends him flying off.  Plus, the frame-rate drops when the action gets too hectic.

On the flip side, thee voice acting is great.  Robin Atkin Downes shines as Travis Touchdown. He gives the character the right amount of cockiness, while sprinkling in some goofiness for good measure.  No discussion about the sound design would be complete without mentioning the music.  The theme song is simplistic yet catchy, and there are a lot of remixes that are played during the combat sections.  Exploring the sandbox is made tolerable by the rockabilly music that plays while driving around town.

No More Heroes is a one-of-a-kind game we rarely see nowadays.  It's gory, funny, and even a little philosophical.  The story and characters are offbeat yet cool.  There is no clear-cut good guy or bad guy, only a moral grey where men and women fight to see who will come out on top.  Even though the gameplay can get repetitive and the open world leaves a lot to be desired, No More Heroes' eccentricity pulls you back in.

In short, I love No More Heroes.

Posted by William Lowery at 7:03 AM No comments: