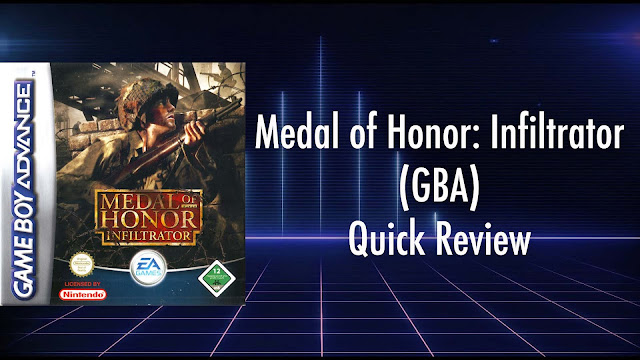 Taking a shooter and putting it on a Nintendo handheld leads to mixed results.  When Call of Duty came to the DS, it attempted to recapture the blockbuster action of its console counterparts, but the games looked like PS1 titles and controlled awkwardly.  The Game Boy Advance saw its share of shooters released on the system, from Doom to Duke Nukem to Medal of Honor.  That last one is important because there were two Medal of Honor games for the GBA, the first was an awful port of Medal of Honor: Underground, while the other was Medal of Honor: Infiltrator.

As Corporal Jake Murphy, you are tasked with stopping Nazi operations in North Africa and Europe.  The plot is minimal to say the least.  Mission details before each stage explain your objectives, while World War II stock footage acts as a segue between levels.  What's most surprising about Medal of Honor: Infiltrator is how it plays.

Instead of a first-person shooter, Infiltrator is a top-down shooter in the vein of classics like Ikari Warriors.  Over the course of 15 levels, you'll shoot Nazis, sabotage their equipment, and infiltrate enemy bases and occupied towns.  The game is subtitled Infiltrator for a reason.  It plays like an arcade shooter, but the old-school gameplay meshes well with the historical setting and it retains that classic Medal of Honor feel. 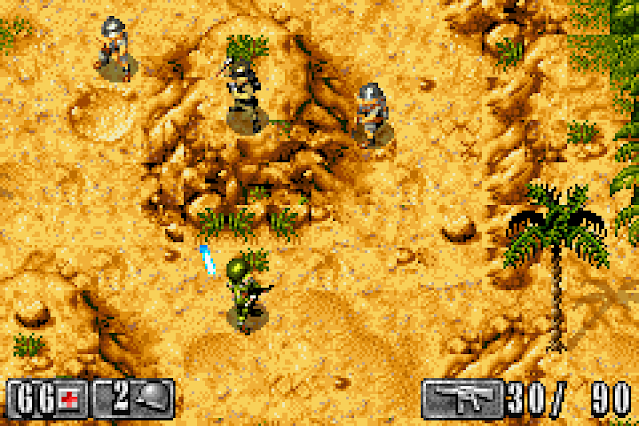 Controls are simple.  The d-pad moves, the A button fires, the B button switches weapons, and the left shoulder button reloads your weapon and lets you interact with your surroundings.  Levels are linear but expansive.  They funnel you from one location to the next but feature branching paths to encourage exploration.  Searching houses, bunkers, and camps rewards you with supplies or the location of a bonus objective.  Instead of obtaining weapons from fallen enemies, you switch between pre-determined load outs.

Weapons include the Thompson, the BAR, the M1 Garand, and a pistol.  Each weapon has a sub-weapon.  The Thompson and BAR come with grenades, which you throw by pressing the A button.  The M1 Garand has time bombs, handy if you need to take out a stationary target.  Finally, you get a rocket launcher with your pistol.  Every arsenal has its strengths and weaknesses.  The Thompson isn't powerful, but it has the highest ammo capacity, plus you can carry up to 10 grenades.  The M1 Garand is the strongest rifle, but it has a small ammo count.

Enemies are split between factions, including soldiers, grenadiers, snipers, and troops armed with a Panzerschreck.  Enemy bullets and grenades can knock off a good chunk of health.  If you die, you lose a life and start where you left off.  Lose all lives, and it's game over.  Medal of Honor: Infiltrator is difficult but fair.  Health and ammo is never in short supply as long as you regularly check your surroundings, plus extra lives are earned for completing the mission and all secondary objectives.

As fun as the game is, it's not perfect.  A handful of missions encourage stealth, but the stealth feels like an afterthought.  Enemy patrol patterns are easy to memorize and if you get caught, the alarm is raised.  However, as long as you don't fire your gun, the alarm won't go off.  Often, I found it easier to lure Nazis to one location and pick them off until all of them were dead.  Interspersed between the stages are segments where you pilot a turret and defend the area from invading Nazis.  These sections feel like Duck Hunt but with Germans and are easy to beat. 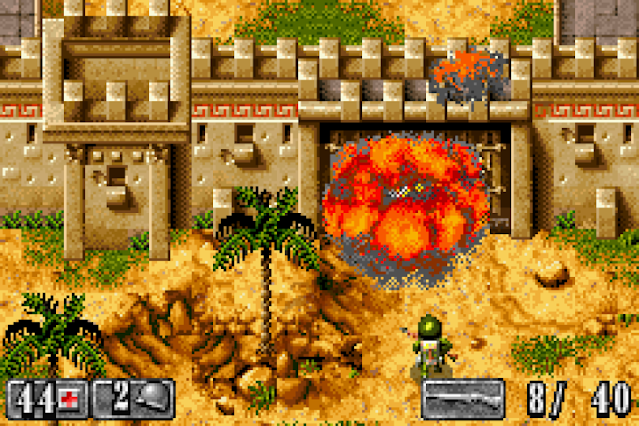 Medal of Honor: Infiltrator is a short game.  The game takes a couple of hours to beat, and the replay value is low.  Beating the campaign unlocks a survival mode and a mode where you must play through the campaign in one sitting.  Multiplayer is a simple one on one mode where you and a buddy fight against each other.  The most unique feature is the inclusion of GBA to Gamecube connectivity.  Connecting your copy of Infiltrator to the Gamecube version of Medal of Honor: Rising Sun lets you use the handheld as a map.  These modes won't hold your interest for long.

Graphically, the game looks great.  The sprite-based characters and war-torn environments are well-designed and it is easy to keep track of your character, even when the action heats up.  The guns sound good, although the compressed remixes of the Medal of Honor tunes do get repetitive.

I went into Medal of Honor: Infiltrator with zero expectations and was pleasantly surprised.  The game could have been a poor-man's emulation of the console titles, but it's not.  Instead, it plays to the GBA's strengths and delivers a fun run and gun shooter that retains what you come to expect from a Medal of Honor experience.  The combat is enjoyable and though the game is lite on content, the experience is fun for what it is.  Those looking for some Nazi-killing action on the go will want to check out Medal of Honor: Infiltrator.

Posted by William Lowery at 3:44 PM