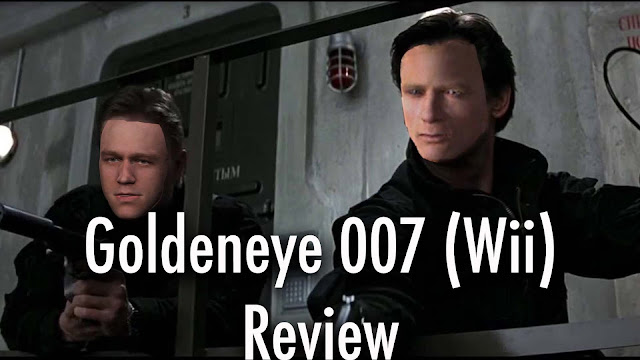 Editor's Note: This game has already been reviewed.  However, that review is outdated and poorly written.  Consider this a "Revisited" on Goldeneye for the Wii.  If you wish to see what 18 year old me had to say about Goldeneye, click here.

It's 1 A.M.  The house is silent except for the sound of gunfire coming from the bedroom.  Inside, four boys are fumbling with boomerang controllers and playing Goldeneye 007 on a rinky-dink TV.  With a deep single-player campaign and hectic split-screen multiplayer, Goldeneye 007 was both a great Bond game and proved making a console FPS could work.  In the years following its release, there were failed cash grabs like Goldeneye: Rogue Agent and planned remasters that never got released due to licensing issues.  In 2010, Activision announced a remake of Goldeneye, one which replaced the blocky head of Pierce Brosnan with the smoothly textured face of Daniel Craig.

James Bond is sent to Russia to sabotage a chemical weapons plant run by General Ouromov.  Joining him is 006, Alec Trevelyan.  Things seem to be running smoothly until Alec is captured and executed before Bond's eyes.  Bond detonates the explosives and narrowly escapes the facility.  Months later, Bond is on the trail of the Janus group, who stole an EMP-resistant helicopter and an EMP satellite codenamed Goldeneye.  Turns out Janus is run by Alec, who wants to steal money from the corporations and banks of England before wiping out all traces of his crime with the satellite.

Goldeneye 007 follows the beats of the 1995 film.  Where the two differ is the tone and setting.  The movie dealt with the fallout of the Cold War and how the past comes back to bite you when you least expect it.  Alec Trevelyan wanted to use the Goldeneye satellite for revenge after England handed over the Cossacks to the Soviet Union at the end of WWII.  Trevelyan himself was a Cossack and narrowly escaped execution, but his parents didn't.  Despite the serious subject matter, the film balanced it with humor, action, and the suave demeanor of Pierce Brosnan. 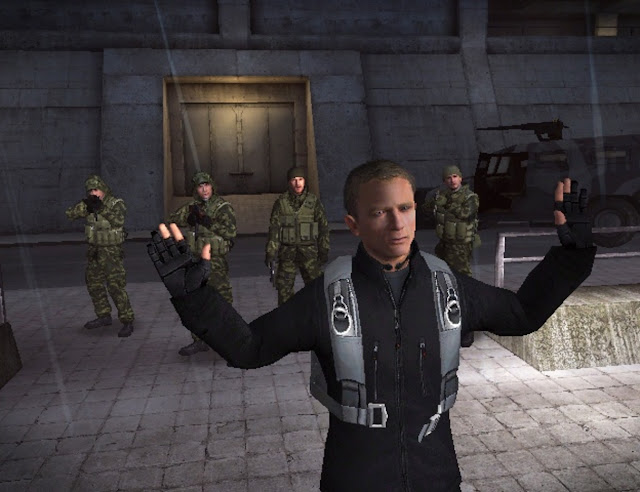 Forget bungee jumping, Craig's Bond doesn't need one to jump off a dam, because logic is for pansies!

This updated take swaps out Pierce Brosnan with Daniel Craig and the Cold War for the Financial Recession.  Comical characters like CIA agent Jack White and the hacker Boris are cut completely, while Xenia Onatopp is less a sexual hyena and more a tough woman.  These changes work well to make Goldeneye fit in with the grittier Craig films, but some of the charm is lost.  Zukovsky isn't a goofy Russian mob boss; instead, he acts and dresses like a henchman.  Trevelyan is less interesting as a bad guy since his backstory was excised and now, he's only doing it for the money.  Fans might be turned off by the changes, but the campaign itself is fun and exciting.

Despite its namesake, Goldeneye 007 is less a remake and more a reimagining.  There are nods to the N64 title, like the recreation of the sniper tower from the opening level, but the game is more intent on doing its own thing, and for the better, in my opinion.  Goldeneye 007 plays like a modern FPS.  Iron sights?  Check.  Regenerating health?  Check.  Limited sprint?  Check.  Unlike Quantum of Solace, which felt like Call of Duty with a 007 mod, this feels like a genuine Bond game meant for the modern audience.  In an essence, its Eurocom taking what they did with the PS2 port of Quantum of Solace and doing it again with a bigger budget and scope.

Levels are well-designed and give the player freedom of choice to use stealth or go in guns-a-blazing.  However, you're encouraged to do the former than the latter.  Taking out security cameras and monitoring enemy patrols can be a tense experience, and the excellent sound design clearly indicates to the player if they're about to be spotted.  When a guard notices you, the music goes quiet, and in those few seconds, you need to terminate him before he calls in reinforcements.  Most stages feature branching paths and hidden pathways you can use to your advantage, although the stealth system has one caveat that I'll get to later. 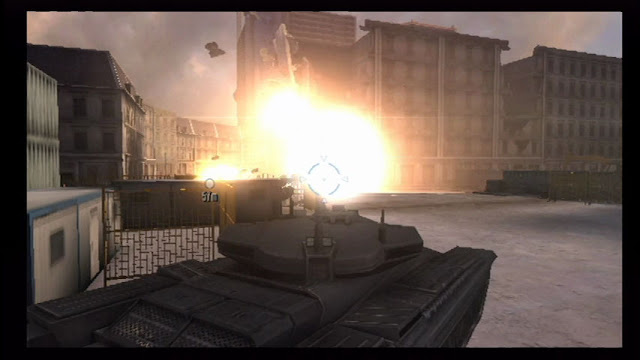 The tank level is a bit more explosive than its N64 counterpart.

Additionally, the controls are excellent.  Sure, you can be a boring normie and use a traditional controller, but why do that when you can use the superior Wii remote and nunchuck?  Gunning down enemies by pointing and shooting is incredibly accurate with the Wii remote.  Multiple options are available to help you find that sweet spot, but the default set-up works fine.  My only issue is that trying to look up or down causes the Wii remote to lose its signal.  This can make shooting thugs who are above or below you a hassle, but it's not too big of an issue.

Though the game is rooted deep into modern shooter mechanics, Goldeneye 007 has a few old-school flourishes mixed into the gameplay.  A "007 Classic" difficulty option removes regenerating health and utilizes health and armor pick-ups.  In a nod to the N64 original, playing on higher difficulties gives you more objectives to accomplish.  Failure to complete all them automatically lowers the difficulty.  I like this system because instead of blasting through the levels to reach the end like in most modern shooters, you need to take your time and explore your surroundings.  Plus, secondary objectives aren't too obtuse nor are they hard to find since an indicator tells you when one is close by.

Unfortunately, gadgets are non-existent.  Like in Quantum of Solace, Bond uses a smartphone to take pics, disable alarms, hack sentry guns, etc.  As I said earlier, the stealth is great, but it's also a bit broken.  Enemies disappear after death, so guards never get concerned when their buddies start dropping like flies.  The enemy AI is generally good, but it's during these portions that their ineptitude shines through.  007 Legends attempted to fix this by not making bodies disappear, but the trade-off was the arenas were too large, making it hard to tell where everyone was, plus you couldn't hide bodies. 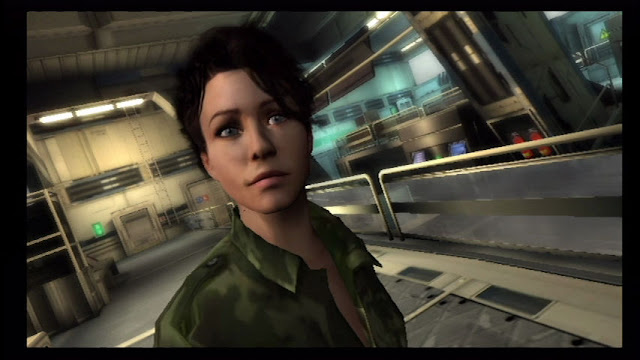 Natalya is back, but don't worry, she's not a pain to escort.

Beating the game takes seven to eight hours.  Afterwards, there's split-screen and online multiplayer.  Split-screen features fewer modes, but you get access to modifiers like melee only and paintball mode, as well as Bond villains like Oddjob and Baron Samedi.  The online servers for the Wii version are long dead.  However, Goldeneye was ported to HD systems as Goldeneye 007: Reloaded.  It's the same game but with HD visuals and a new challenge mode, but as of this writing, the servers for that version are still up.  Your choice of what version to get boils down to whether you want HD graphics or not.

About graphics, this is one of the best-looking third-party Wii titles.  Character models and environments are detailed, and the game extensively uses motion capture to give the action a cinematic feel.  If you played Dead Space Extraction, the emphasis on the first-person perspective during cut-scenes will feel familiar.  Environments feature plenty of destructibility as bullets rip through furniture and other objects.  I also loved some of the little visual tricks Eurocom employed, like making the dancers in the nightclub level silhouettes and distorting Bond's movement when he's on the dance floor.

Sound is excellent.  Daniel Craig and Judi Dench reprise their roles as Bond and M and do a stellar job, as does the rest of the cast.  Gunfire is loud and enemies make a satisfying "URK!" when you shoot them in the head.  Bullets rain on to the floor as you fire away, and the music is great. 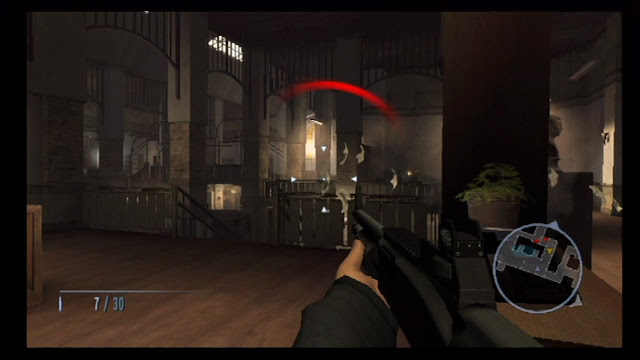 The Archives is one of the highlights of the campaign.

Out of all the Craig-era Bond games, Goldeneye 007 is the best of the bunch.  The reason why this game works so well, in my opinion, is it doesn't try to pay lip-service to the original.  It's more focused on doing its own thing, and I think it succeeds in that regard.  Other Bond games during this time struggled to deliver good gameplay, often focusing too much on action and too little on stealth.  Goldeneye strikes a happy balance between the two play-styles, and the result is a solid shooter.

Posted by William Lowery at 4:58 AM