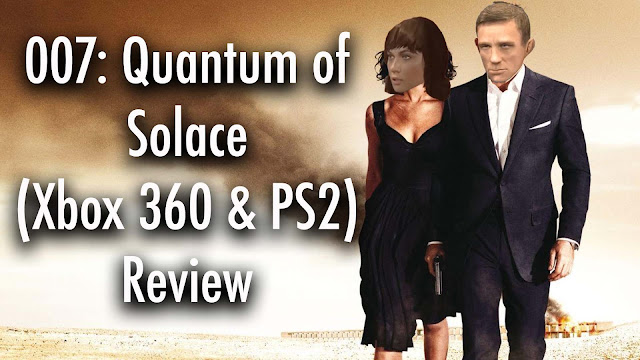 2002's Die Another Day left the 007 series at the crossroads.  The film didn't do well critically and while it was a financial hit, fans didn't appreciate how absurd James Bond had gotten.  Meanwhile, the financial failure of Goldeneye: Rogue Agent and From Russia With Love led to EA losing the rights.  In 2006, James Bond returned to cinemas with Casino Royale, a reboot which focused on a younger, lesser-experienced Bond, and had a grittier tone compared to previous outings.  The same year, Activision picked up the rights to 007, and would release their first title, Quantum of Solace, in 2008.

Loosely based on the film of the same name, the game follows James Bond, who is on the hunt for members of a clandestine organization called Quantum.  His deceased lover, Vesper Lynd, had ties to the group, and he's trying to figure out what they're up to.  Bond's investigation leads him to Dominic Greene, a businessman with ties to Quantum.  Greene has been siphoning Bolivia's water and oil supply with help from the corrupt general Madrano.  Bond teams up with a government agent named Camille to stop Greene and dig up clues on Quantum and its leader, Mr. White.

Despite being called Quantum of Solace, only 25 percent of the game adheres to the movie's story.  The rest is a flashback set around Casino Royale.  It does a competent job recapping the events of the previous movie, but not the movie this game is supposed to be based on.  You're not given much context as to who Dominic Greene is or why Bond wants to know more about Quantum.  The story's biggest weakness is how it's told.  Instead of having actual cut-scenes, the game uses MI-6 video screens where characters discuss what's happening. 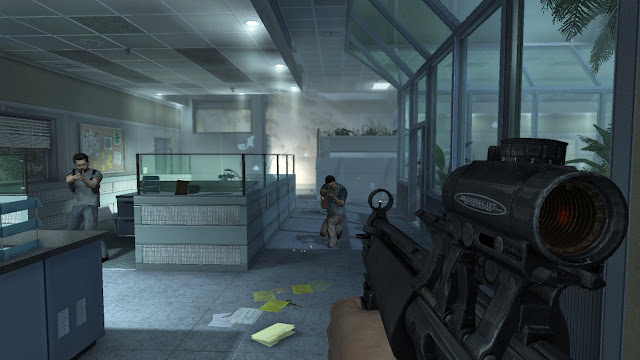 It's the laziest form of storytelling possible.  Why bother showing the dogfight between Bond and Madrano when you can have M and Tanner comment on the situation?  It's clear the game was rushed and based on my research, this was a necessity.  Quantum of Solace had a troubled development.  The creative director on the HD version left the project not far into development, and the studio wasn't given much information on Quantum's story, since the movie was plagued with production problems courtesy of the writer's strike.  The makers of the PS2 version had little interaction with the team behind the HD port, so they were left in the cold on a lot of plot information.

Quantum of Solace on 360 and PS2 are both similar and different.  They follow the same story, but where they differ is the gameplay.  While the 360 version is a first-person shooter with elements of third-person combat, the PS2 version is a third-person shooter that emphasizes stealth and platforming.  Additionally, the PS2 version features an extra level based on the Haiti scene from Quantum of Solace, and the stages from the Xbox 360 port are radically different with regards to objectives and level design.

The best way to describe Quantum of Solace on 360 is its Call of Duty with a James Bond skin.  There's a lot of shooting and not a lot of subtlety.  What makes the gameplay unique is its mixture of first and third-person perspectives.  When you take cover, the game switches to a third-person view, but when you're out of cover, it's first-person.  It works great, plus both perspectives have their advantages.  Health regenerates faster when you take cover but in first-person, it's easier to move around your surroundings.

Gunplay is solid.  Bond can carry three weapons, one of which is always his P-99.  There are pistols, SMGs, assault rifles, sniper rifles, and more.  Scattered across each stage are cell phones, which contain either texts, audio logs, pictures of important objects, or secret weapon locations.  Many shootouts let you use the environment to your advantage.  Enemies will conveniently take cover next to an explosive canister or prop that Bond can shoot, which leads to a Rube Goldberg-like chain of events.  It's incredibly satisfying.  It's not just running and gunning, stealth does crop up from time to time.  Some levels require Bond to sneak by guards and security cameras.  If he is spotted, reinforcements are called in. 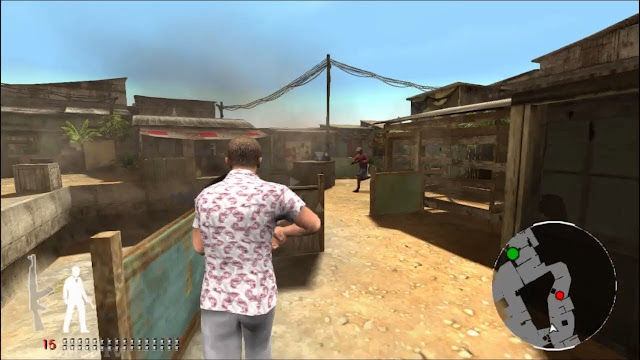 Chase scenes have a proper sense of urgency in the PS2 version, whereas in the 360 version, you can take as much time as possible chasing down your target.

On PS2, the combat is more stealth-based and about getting the drop on enemies when they least expect it.  The gameplay puts a bigger emphasis on Bond's resourcefulness, as you'll rely on fire extinguishers and chandeliers to catch thugs off guard.  For example, in the Miami level, Bond can use a forklift to incapacitate some goons standing near a gate.  Doing this opens a way to the rooftops.  You can also carry as many weapons as you like, which is good because ammunition is scarce.  While the enemy count is lower, guns do more damage, so taking cover is essential.

As I mentioned earlier, the PS2 version features most of the same levels from the 360 version, albeit with different layouts.  The opening level set at White's mansion is more subdued than in the 360 version.  The sinkhole level ends with a helicopter boss fight, but instead of just shooting the chopper till it explodes, you need to take out the gunners then the pilot with a sniper rifle.  The last level not only pits you against Dominic Greene but also his right-hand man Elvis, who is absent in the 360 version.

While there are things I like about both games, the biggest problem shared across both versions of Quantum of Solace is a lack of variety.  Previous 007 outings like Agent Under Fire and Everything or Nothing mixed up the shooting with gadgets and vehicle sections.  Quantum of Solace has neither of those.  The game teases you with the possibility of vehicles, but it never happens.  The only gadget in Bond's arsenal is his cellphone, which is used to unlock doors and hack into security cameras.

This is a problem with all the Craig-era Bond games, Quantum of Solace included.  The realistic take on the character meant you could have him carrying around a laser wristwatch or driving an invisible Aston Martin.  As a result, the gunplay takes center stage.  However, the game does offer plenty of quick-time events.  The 360 version goes a bit overboard with QTE's as even doing takedowns is a QTE, while the PS2 version restricts them to scripted sequences like the part where Bond chases the bomb maker on the cranes.

Quantum of Solace is also incredibly short.  Either version will take you no more than four hours to beat.  On 360, there is online multiplayer for up to 12 players, and according to my research, the servers are still active.  However, I was not able to test the multiplayer.  There are also MI-6 debriefing rooms, which act as mini-museums showing off concept art, character models, and more.  These give you a taste of what could have been, especially when you come across storyboards for unmade cut-scenes based on scenes from Casino and Quantum.  The PS2 version has no bonus content or multiplayer.  Once you beat the campaign, that's it. 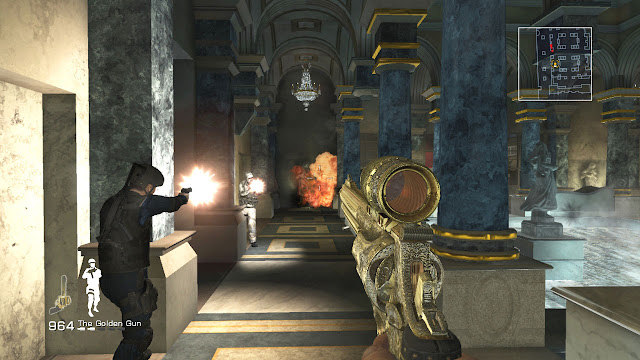 Most of the multiplayer modes include standard fare like Deathmatch and Team Deathmatch, but there are a couple of unique options, like Golden Gun.

Visually, both versions of Quantum look good.  I was particularly impressed by the PS2 port, which features very detailed character models and environments, which was surprising since this was a late-cycle PS2 release.  The 360 version features destructible environments, and I like some of the little details in this version.  For example, if you shoot car tires, they'll deflate, and locations are packed with all sorts of items to make the levels feel lived in.  It's small stuff, but it gives the levels personality.

Sound design is solid.  Guns sound loud and the voice acting is well-done.  Most of the cast from Casino Royale and Quantum of Solace reprise their roles, and they do a good job.  The stand-out is the music, which is fantastic.  It was composed by the same person who did From Russia With Love's game soundtrack, and it sounds great.  It's a classic 007 score that makes extensive use of the 007 theme.

Quantum of Solace is a mixed bag.  The shooting is good, the graphics are solid, and the production values are top-notch.  However, it suffers from a lack of variety, a short campaign, and a jumbled mess of a story. The game often devolves into a shooting gallery where you move from one area to the next, mowing down enemies and taking cover when necessary.  It desperately needed stuff like gadgets and vehicles to keep things interesting.  The closest we get in the 360 version is a level where you control Bond after he's poisoned by Le Chiffre.  The controls are wobbly, his view is distorted, and there's a time limit that adds tension as you try to get him to his car in time.

The PS2 version gets points for trying something different instead of copying Treyarch's work.  It's not perfect, but it's a commendable effort.  Plus, it utilizes proper cut-scenes more than Treyarch's version.  However, it has no extra content beyond the campaign, so the replay value is incredibly low.  If you want lots of shooting and explosions, play the 360 version, but if you want a game that tries to be as Bond as possible, try the PS2 version.

Posted by William Lowery at 6:48 AM