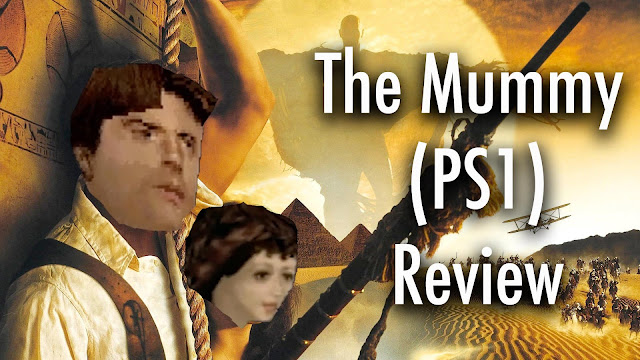 1999's The Mummy is an entertaining flick featuring actions, scares, romance, and Brendan Fraser, all wrapped up in a neat little bow by writer/director Stephen Sommers.  Given how the movie involves treasure hunting and evading perilous traps, it'd make sense to do a video game tie-in, especially with how successful the Tomb Raider series was.  Development duties were handled by Rebellion, a studio with plenty of hits (Aliens vs. Predator, Sniper Elite) but just as many misses (Shellshock 2, Rogue Warrior).  Is The Mummy a very good time, or is it as fun as getting sucked dry by a mummy?

Like the movie, the game follows Rick O'Connell, a former legionnaire who leads an expedition to the lost city of Hamunaptura.  Unbeknownst to Rick and the gang, the mummified body of Imhotep is buried beneath.  3,000 years prior, Imhotep was cursed with the Homdai after murdering the Pharaoh and attempting to resurrect his lover Anck-Su-Namun.  When researcher Evelyn swipes the Book of the Dead found by a rival expedition, she accidentally reads the inscription to resurrect the mummy, who now wants to take over the world and resurrect his girlfriend.

Instead of doing a one-for-one recreation of the movie's story, the game opts for a truncated retelling that omits most of the plot threads and characters.  Don't expect to see the gung-ho Americans, the museum curator, or the greedy Arab warden in PS1 form.  It's just Rick, Evelyn, Jonathan, Imhotep, and Beni, with cameos from Ardeth Bay and Anck-Su-Namun.  This is fine if you've seen the movie, but if you haven't (and you should), you might feel lost since you only get the bare minimum.  It's disappointing there aren't levels based on scenes like the biplane fleeing Imhotep's sandstorm or Rick's hanging.  There is a bonus level set in Cairo, but that's it. 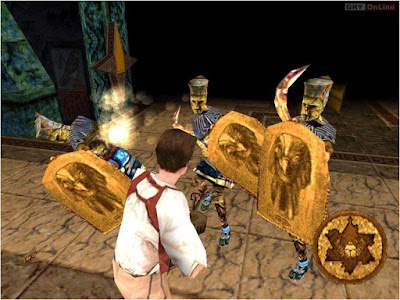 To say you kill a lot of mummies is an understatement.

Though the game is set primarily in Hamunaptura, the developers get creative crafting new parts of the necropolis not seen in the movie.  Fans will get a kick out of seeing certain locales and landmarks like the statue of Anubis, the embalming room, and the treasure chamber.  The game also does a good job at recreating the movie's atmosphere.  One moment, you're gunning down mummies while Jerry Goldsmith's music blasts in the background, and the next, you're tiptoeing around ancient ruins, unsure of what's ahead.  The graphics might be blocky, but the tone isn't.

Take Tomb Raider, add Brendan Fraser, and that's The Mummy in a nutshell.  Each level sees Rick exploring different parts of Hamunaptura to find items necessary for progression.  Along the way, he fights mummies, solves puzzles, and avoids booby traps.  Sounds exciting, but there are many things about this game that attempt to derail the fun, like the controls.  Rick's movement is stiff and tank-like, not helped by the clunky jumping and climbing mechanics.  He also has a dodge roll that covers five football fields, but the wind-up animation leaves him vulnerable to attack.  The dodgy controls become tolerable after a while, but your patience will be tested many, many times.

Levels are broken off by hub areas.  To access new areas, you need to find whatever it is the other characters are looking for, be it pieces of a hieroglyph or canopic jars.  Stages are broken into parts.  When an area is completed, you earn a key fragment.  Obtaining all pieces of the key is necessary to collect the end-stage item.  Additionally, collecting all treasures and defeating all enemies marks the current section as a perfect zone.  The more perfect zones, the more rewards you unlock like cheat codes and bonus levels.

Combat isn't half-bad.  Rick haas a sizable array of melee and ranged weapons to use.  You start off with revolvers, a machete, and a torch, but you also acquire a shotgun, a machine gun, and an ancient sword.  A helpful auto-aim lets Rick snap to the nearest enemy and fire away.  Melee weapons are equally useful since you can parry attacks, handy when you're trying to conserve ammo for your guns.  The enemy variety is decent.  You'll square off against an assortment of mummies including slave mummies, warrior mummies armed with swords, shields, or spears, mummies with sledgehammers, and spirit mummies.  There are also grave robbers to contend with, plus scarabs, but the main threat is Imhotep and his mummy army. 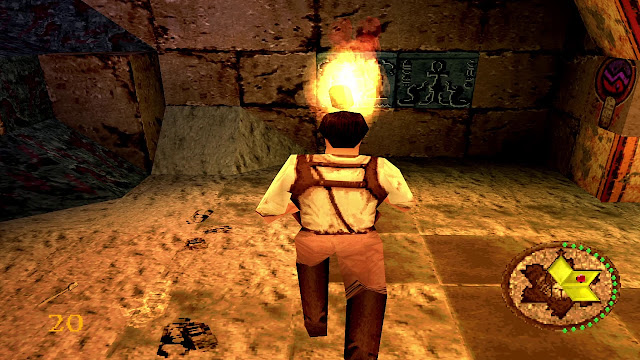 A nice detail is how Rick leaves footprints in the sand, handy if you get lost.

Along the way, you'll find treasures and hieroglyphs.  Collecting treasure gives Rick amulets.  Amulets act as a screen clearing weapon that kills any enemies caught in its blast radius when thrown.  Finding hieroglyphs and lighting them with your torch is how you earn extra levels.  If you die, you start at the last checkpoint, but if you lose all lives, it's game over, and you restart from your last save point.  However, most of your deaths won't be the result of the mummies, but the wonky platforming and set-piece moments.

The game's set-pieces involve Rick either surfing a log down the river or running away from scarabs, flies, fireballs, etc.  The short draw distance leaves you little time to react to whatever springs up, plus it's easy for Rick to get hung up on the environment.  In the case of the log surfing, you need to jump or duck in the exact spot or else Rick gets knocked off.  Though they only last 30 seconds when done correctly, it can feel longer than that due to how cheap these parts are.

On the flip side, the boss battles are ridiculously easy but also unusual.   Beni's fight plays out like Pitfall, while Anck-Su-Namun's encounter is Pac-Man but with a sexy mummy that'll mount and suck you off if you get caught (I'm not joking).  It's bizarre to have boss fights designed in this way, but at least they're enjoyable for how offbeat they are.  However, the final fight against Imhotep is annoying.  You can't harm him during his first two phases, and during the second phase, he summons spirit mummies to chase you around in addition to throwing energy spheres.

Visually, The Mummy is equal parts impressive and unimpressive.  Though the game's stages consist of catacombs and tombs, there's something appealing about exploring these ancient ruins.  As I said earlier, the movie's adventurous tone is recreated well, and you might get the occasional goosebump whenever you hear spooky voices emanating from parts unknown.  The same can't be said about the character models, which look terrible.  Rick looks like someone took a cardboard box and slapped Brendan Fraser's head on it, plus his walking and running animations are hilarious.  Other characters like Beni and Ardeth look terrifying with how gaunt and jagged their designs are. 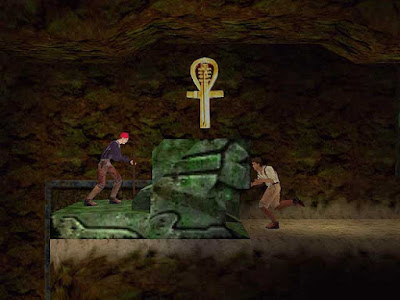 Remember the part in the movie where Beni made Rick go through an obstacle course?

None of the actors reprised their roles; instead, we have voice actors doing laughably bad impressions.  The performances are terrible but in a good way.  The guns sound loud and powerful, and mummies scream in agony when killed.  Jerry Goldsmith's score is used in full-force, and while some tracks get repeated, it's great music.

Like most movie tie-in games, The Mummy is mediocre.  It's clunky, it can be unexpectedly cheap, and it lacks polish.  Yet, I won't lie and say there's some fun to be had.  Gunning down mummies is entertaining, as is exploring Hamunaptura, and the game has a charming, PS1-era vibe to it.  If you want a good action-adventure romp in gaming form, stick with Uncharted, since it does what this game tries to do, but with a lot more polish.  The Mummy is no Encino Man, but it's definitely not a Furry Vengeance either.

Posted by William Lowery at 6:58 AM