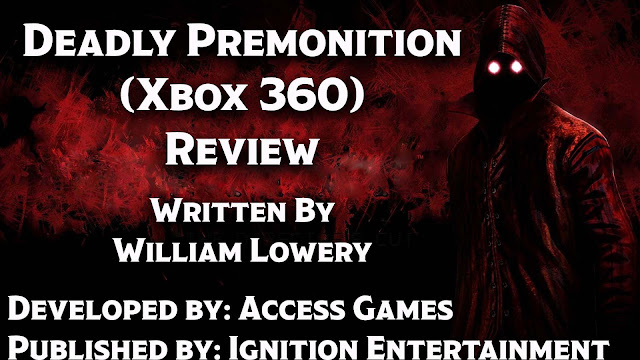 Is there such a thing as a "so bad, it's good" video game?  People cherish bad movies, but we rarely cherish bad games.  Bad games are treated as bad games, and while it's fun to rip on something awful, we really don't recognize the ones that are terrible on a technical level but are still enjoyable for other reasons.  Earth Defense Force 2017 was the first time I can think of when the phrase "so bad, it's good" was applied to a game, the other time was with Deadly Premonition.  In a year which gave us great games like Red Dead Redemption, Super Mario Galaxy, and God of War III, Deadly Premonition mesmerized and polarized gamers.

The quiet town of Greenvale is thrown for a loop when the lifeless body of Anna Graham is found propped up on a tree in the forest.  The murder attracts the attention of FBI special agent Francis York Morgan.  While driving to town, a hooded figure appears in the middle of the road and causes him to swerve off the road and into a tree.  He makes it out with a few bumps and bruises, but all of his equipment is destroyed.  Once in town proper, he meets with the sheriff and deputy to do an autopsy.  York discovers red seeds underneath Anna's fingernails, which makes him suspect there a connection between Anna's murder and ones he's previously investigated.

If Deadly Premonition's plot sounds familiar, it's because it's very, very reminiscent of Twin Peaks.  Both Deadly Premonition and Twin Peaks follow an FBI agent solving a murder deep in the heart of the northwest.  Like Twin Peaks, there's surrealistic imagery, offbeat characters, and even a red room York visits in his dreams.  The first few hours are rough from a storytelling and gameplay perspective.  The story is derivative, and the gameplay is clunky, to put it lightly.  Yet, the deeper you dive, it becomes less a copycat and finds its identity, and what starts as an investigation becomes a maddening tale of dark secrets, red seeds, coffee, and self-discovery. 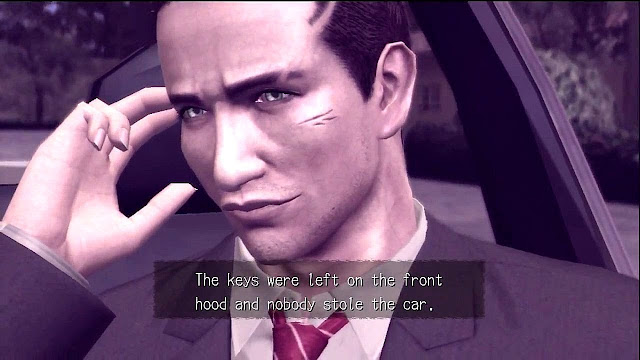 There's always something on York's mind.

At the center of it all is Francis York Morgan, but please, call him York, everyone does.  York is accompanied by an imaginary friend named Zach who he always converses with even when he's out in public.  When he talks with Zach, he's talking with you, the player.  Whether it's topics like the investigation, old movies, or reminiscing about the past, York always has something to talk to Zach about. Like Dale Cooper, he loves coffee, but for York, coffee is his daily horoscope, was the milk he mixes with it has something to tell him about the day ahead.

There are reasons for his eccentric behavior, but to explain why spoils the experience.  The characters are Deadly Premonition's strongest point, and with how the gameplay is structured, you're going to spend a lot of time getting to know the inhabitants.  Personal favorites include the General, the owner of a scrapyard who tells York stories about his time in Vietnam, and Harry Stewart, a reclusive old man who wears what looks like a Combine mask and relies on his butler to communicate, usually in rhymes.

I mentioned before the story starts simple but gets crazier as York discovers more clues and the body count begins to rise.  Behind the murders is a being known as the Raincoat Killer, a hooded figure who lurks around with an axe and stalks his victims whenever it's raining.  He's considered an urban legend, but with how frequently York runs into him, someone is behind the cloak.  While the game makes it a bit too clear who the killer might be, Deadly Premonition throws a curveball and sets up someone else as the mastermind.  I won't say much else, but the final act gets ridiculous, too ridiculous if you ask me, yet it ends on a weirdly profound note.

Deadly Premonition is one part open world and one part survival horror with elements of investigation mixed in.  Every chapter has objectives to complete within a certain time frame, and when York isn't investigating, he's free to explore Greenvale.  Greenvale reminds me of Santa Destroy from No More Heroes.  It's barren, there's not much to do, and you may question if the sandbox was needed.  However, there are incentives for exploring the town, like side missions.  Each citizen has a task to do, like finding a missing item, getting a lady and her pot home before the pot goes cold, or rearranging boxes in the back of a grocery store. 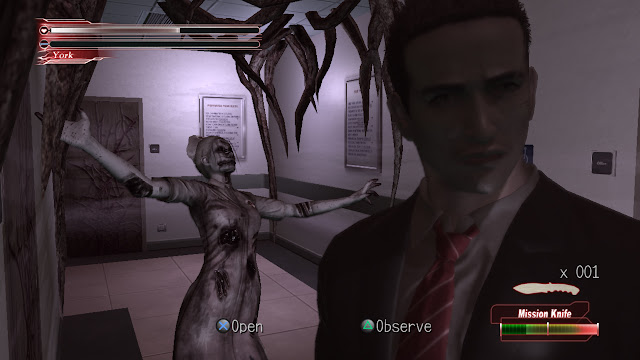 Doing them grants rewards like discount cards, the ability to fast travel, or special weapons that have infinite ammo or unlimited durability.  Every store, restaurant, and bar open and close at different times, and if it's raining, everything is closed, and no one is outside.  In any other open world game, businesses are open at all times and players can choose to do the optional content whenever they want.  Having these parameters makes you think about what's open, which characters are free to speak with, or how much time you have left till you can start a mission.

It's not like Dead Rising where everything is on a timer.  On the contrary, time moves at a slow pace, so you have plenty of headway to get things done.  Need time to speed up?  Smoke a cigarette.

Additionally, you need to be mindful of York's condition.  York has hunger and sleep meters in addition to a health bar.  They degrade as the day lingers on, but can be replenished with food and beverages you find or purchase.  Changing clothes and shaving at regular intervals is also important because if you don't do either, he starts to smell, and facial hair grows on his face.  The game rewards money for doing these daily tasks, which is a nice way of motivating players to keep York in good shape.

Deadly Premonition has some novel ideas in its open-world structure, but the combat is arguably the worst part of Deadly Premonition.  Imagine Resident Evil 4, minus the fun, and that's combat in a nutshell.  York's investigation takes him to places like a saw mill, a hospital, an art museum, and more.  What ends up happening is he finds himself in an alternate reality of said location where everything is dirty, dank, and populated with spooky shadow people.

The shadow people are the only enemy you fight and are less a threat and more an inconvenience.  They move slow, have easy to avoid attacks, and take a boatload of bullets to bring down.  York has a pistol that does meager damage, although it has infinite ammo.  He can use melee items like golf clubs, knives, and swords, but they lose durability when you hit stuff with them.  Eventually, he gets his hands on a shotgun, submachine gun, and an assault rifle, which are infinitely better than the pea shooter he's stuck with.

However, you can avoid a lot of enemies by holding your breath.  Pressing the left trigger makes York crouch and hold his breath, making him invisible to all shadow people.  This comes at the cost of increasing his heart rate, but it drains quickly.  It's possible to skip most combat by creeping along quietly then bolting it out of the room.  The combat is tedious, boring, and stale.  You can tell these sections were an afterthought during development. 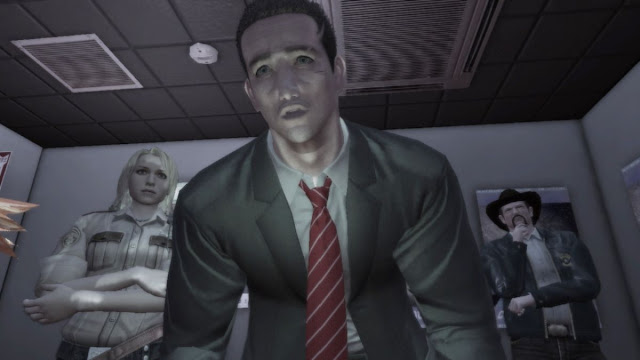 The only bright spots occur when York runs into the Raincoat Killer.  Depending on the circumstances, he may need to hide from the phantom menace by ducking somewhere and waiting it out, or he may need to run away, which involves a QTE sequence.  I like these parts best because York can't solve the problem by shooting it, and it keeps you engaged, unlike the rest of the combat.

Graphically, Deadly Premonition looks average.  Character models are decent, and I like the little visual touches like the scruffs of facial hair on York's face or how clothes bend and fold to a person, but the environments look like high-res PS2 textures.  The best part of the graphics are the animations.  They're exaggerated and it makes the cut-scenes and conversations a joy to watch.  Ironically, the Xbox 360 release is the best-looking version.  Subsequent ports on the Switch and PC were based on the PS3 version, a.k.a. the Director's Cut, and feature worse textures and a less stable frame rate.

Voice acting rivals games like The Last of Us and Bioshock in terms of brilliance.  The performances are all over the place, some characters sound bored when they should be excited, other times they sound excited during the dramatic moments.  This also applies to the music.  It's a varied but weird soundtrack.  Some of the music sounds like someone farting into a saxophone, and there's even hip-hop mixed in, but I love it.

Deadly Premonition looks and plays like a sixth-generation game, but it's also distinct.  The combat is a bore, but the story isn't.  It's what pushes you to go through the sleep-inducing shooting galleries because it's mesmerizing, as are the characters tangled up in it.  What it lacks in polish, it makes up for with its unusual brilliance.  The more time you spend in Greenvale, the more the game's charm rubs off you.  Deadly Premonition isn't "so bad, it's good", it's "so bad, it's brilliant."

Posted by William Lowery at 5:32 PM