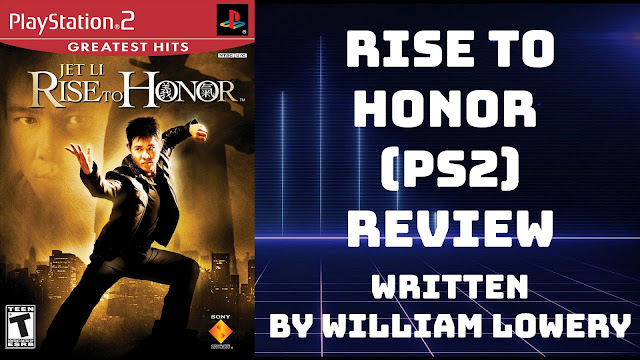 Hollywood and video games go hand in hand like apples and oranges.  Both are hugely successful, so it isn't surprising to see the two mediums overlap with one another.  There have been games based on movies, movies based on games, and games featuring big-name actors.  With the rise of 3D gaming in the 90's, companies realized they could use the technology to digitize actor's faces, and in turn put them in their own original adventure.  This month, I'm reviewing three games featuring celebrities in the starring role, beginning with Jet Li: Rise to Honor for the PlayStation 2.
Rise to Honor follows Kit Yun, an undercover cop assigned to protect the veteran gang leader Boss Chiang.  After announcing his retirement from the criminal underworld, Chiang is assassinated by his associate Kwan.  Before dying, Chiang gives Kit a letter he is to give to Chiang's daughter Michelle, who lives in San Francisco.  Kit's mission is anything but smooth as Kwan orders his associates to track down Kit and Michelle and get back the letter.
Rise to Honor is your standard undercover cop tale where the hero threads the line between good and bad to get the job done.  Picture Sleeping Dogs, minus the intrigue or depth, and you have Rise to Honor in a nutshell.  The characters are cliché for this type of story.  For example, Kit reunites with Chi, a childhood friend who doubles as the comic relief always getting himself into trouble.  Kwan is your standard bad guy who gets easily frustrated when things aren't going his way and who has a never-ending supply of goons at his disposal.  What it lacks in plot it makes up for with its well-directed cut scenes and blockbuster action. 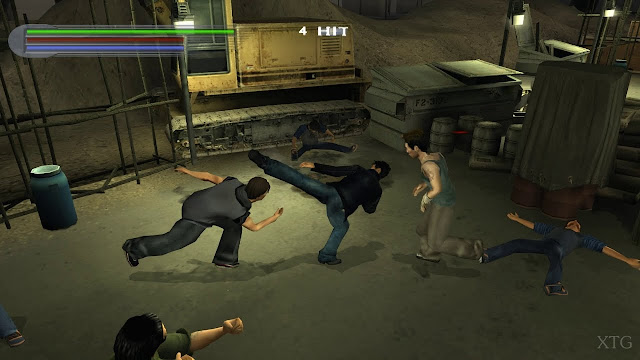 Taking on three or four guys is no problem, but it's when you're pitted against larger numbers of
enemies that the problems begin to show.
This is a brawler with elements of shooting and stealth.  What's most unique about this game is its control scheme.  Instead of pressing buttons to attack, fighting is done by flicking the right analog stick.  None of the face buttons are used at all.  Instead, actions like jumping, blocking, or interacting are done by pressing R1.  Since combat relies on the right control stick, the camera is fixed and follows Kit around.  The set-up is unusual, yes, but you settle into it quickly.  There's a rhythmic flow to the fighting which I enjoy, and when you land a successful hit, the camera cuts to a dramatic angle to emphasize the impact.
However, it isn't long into the first level that you realize how scripted the game is.  Every level is designed to funnel Kit from one area to the next, with nothing in terms of branching paths or secrets to discover.  People who complain about modern games being too linear will be in for a wake-up call.  It's so scripted that cut-scenes are distinguished from gameplay by a little film reel in the corner of the screen.  The guided nature of the campaign creates problems for the mechanics.  There's little room for creativity when it comes to fighting or shooting.  Attempting to do something different is likely to get Kit's butt kicked.
While I love the analog based set-up, there's not much depth to the combat itself.  All of the moves are pre-determined, so you'll rely on the same kicks and punches to defeat the bad guys.  There are throws, counters, plus environmental attacks, but that's as deep as it gets.  New enemy types like heavies and fast-moving goons keep the combat from becoming repetitive, but they are cheap and will gang up on you when if you're not careful.  Each successful strike fills up a special meter that amplifies Kit's attacks when holding L1.  Countering attacks is also finicky.  It only works when it wants to and even when you're actively pressing the required triggers, Kit is more likely to block or dodge and not follow up with something. 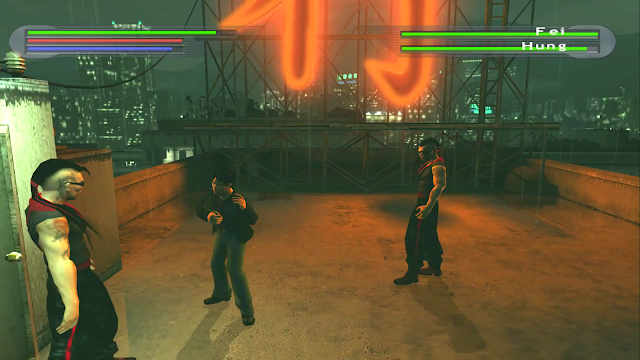 Boss fights are a good challenge and require a little thought to figure out.
As I mentioned earlier, there is shooting and stealth.  Neither has aged well and both suffer from too much scripted action.  During gunfights, enemies take cover in pre-determined spots and take turns firing at you.  In stealth, if you get caught, it's an instant game over.  Though not as prevalent as the other two, the stealth is frustrating due to its trial-and-error nature.  On the other hand, the shooting, while basic, offers some fun and features some of the game's best moments, like when Kit is trapped in a garage and has to fend off his assailants using a pair of nail-guns.
Plus, pressing L1 when the special meter is full slows down time while Kit leaps into the air and fires away.  Additionally, the boss fights offer a good challenge.  Each one features a weakness you need to figure out and use against your opponent.  These are great but just made me wish the rest of the game had just as much creativity.
Since Rise to Honor was developed by Sony, the visuals look really good, especially since this is a PS2 title.  Characters and environments sport a lot of detail, and all the animations were done with mo-cap, which adds a feeling of realism to the fights knowing Jet Li himself provided the fighting moves.  The camera pans out at different points to emphasize the scale of the level you're in, like when Kit has to escape an industrial facility and finds himself shimmying along ropes from one building to the next.
Sound is a mixed bag.  The stock sound effects and music are forgettable, but the voice performances are good.  A nice touch is that Asian characters speak in their native language during gameplay and cinematic, which is a cool touch.  However, you can choose to switch all the dialogue to English if you want. 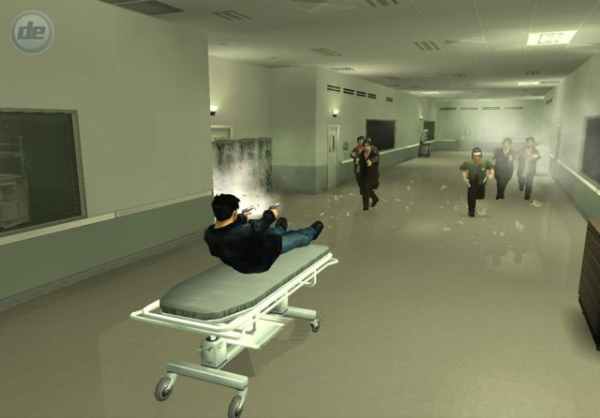 Propelling yourself down a corridor with guns is as awesome as it sounds.
Rise to Honor may have star power, but the final product is equal parts spectacular and unexciting.  The biggest problem is its linearity.  It's hard to enjoy what's on offer when the game is pulling you from one gameplay section to another.  The pieces are there but it lacks depth and variety.  The fighting system is ingenious, but it's rough around the edges.  Unleashing your inner martial arts master offers thrills, but then the dodgy movement and aggressive AI rear their head in.  The only thing Rise to Honor rises to is average.
Final Score: 5/10
Posted by William Lowery at 10:09 AM