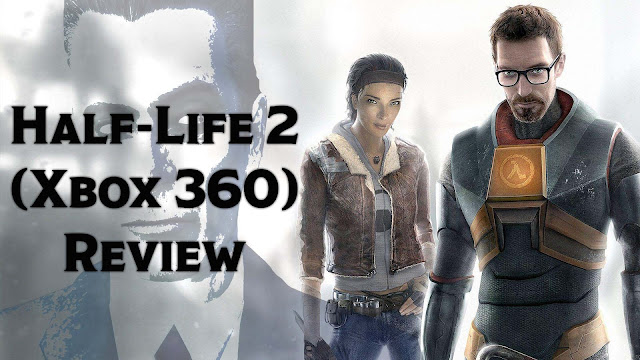 What makes a game iconic?  A game so good, it remains regarded as one of the best years after release?  There's no right or wrong answer, but if you had to ask me, its when the efforts of the designers, writers, artists, programmers, etc. manage to push through and deliver what they planned, without the pressure of deadlines and hype getting in the way.  In other words, they made the game and got it out.  Half-Life took pre-established ideas, peppered it with new ones, and out came a remarkable shooter that evolved the genre, namely with its approach to storytelling.  Six years later, Valve releases Half-Life 2, the rare sequel that accomplishes what its predecessor did and much more.
Gordon is awoken from stasis by G-Man and sent back to Earth, an Earth under control by an alien race called the Combine.  Gordon may have thwarted the Xen, but his actions drew the Combine to Earth.  Within seven hours, the planet was there's.  He is put on a train heading for City 17, an Eastern European city which houses the Citadel, a towering monolith where the leader of Earth, Wallace Breen, resides.  Gordon eventually meets up with some former Black Mesa colleagues like Dr. Kleiner and Barney Calhoun.  They are part of an underground resistance trying to end the Combine's control of Earth, and Freeman's sudden reappearance might help them give the upper hand they need.
The first Half-Life's story was basic, but it was how the story was told that invested players in the plot and world.  There were no cut-scenes or text logs to sift through, it just unfolded as you went along, dropping clues to something bigger going on that wasn't shown.  Half-Life 2 retains the unique approach to storytelling, but it also offers a deeper narrative to explore and a dystopia world to navigate.  It's a dystopia where humanity has lost its freedom, freedom of choice, freedom of speech, you name it.  Humans are corralled around by their alien masters, or they choose to help the Combine by becoming soldiers. 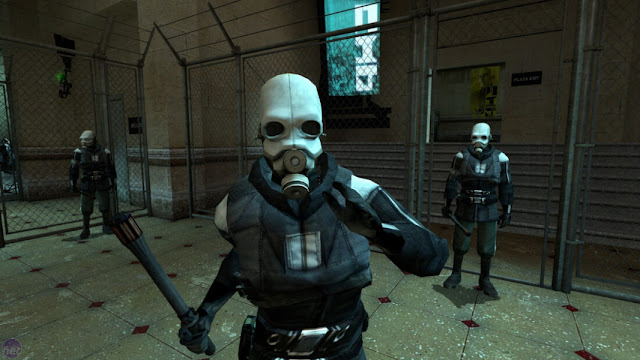 "I just roughed up a little old lady for jaywalking!"
Everyday houses and other structures double as enemy bases, or are outfitted with tech to ensure the Combine can monitor what people are doing.  Ironically, Gordon Freeman lives up to his last name in many ways.  He's not under suppression, nor is he afraid of the Combine.  As G-Man says, "The right person in the wrong place can make all the difference."  When Gordon is on the train, he's seen by others as just another individual, but in the second half, his actions turn him into a symbol of hope for the resistance.  He is the free man.
Half-Life's nondescript scientists and security guards are exchanged for interesting characters like Dr. Kleiner and Alyx Vance, daughter of Eli Vance.  Even the Vortigaunts are given depth since they are now allies to the humans, using their abilities for good instead of evil.  Yet, Alyx Vance stands out.  She is smart, sarcastic, and headstrong, always looking to pitch in and help others when needed.  Never does the game flaunt her charm, nor does she fall head over heels for Gordon.  Alyx is trying to remain hopeful in a world that has abandoned the idea, and seeing what Gordon does pushes her to not give up.
Half-Life 2 is a first-person shooter with elements of puzzle-solving and platforming mixed in.  It plays like the first, but all the mechanics are refined, polished, and expanded.  For starters, Gordon moves slower compared to the original, where he went from 0 to 100 at the press of a button.  The slower, more natural movement makes it easier to control him.  You don't have to worry about crouch-jumping either, which makes platforming more tolerable.
Once Gordon meets with the resistance, he reacquires his HEV suit.  The suit absorbs incoming damage and lets him sprint or breathe underwater for a limited period of time.  It also heals him in case he's poisoned by one of the game's new enemy types.  Also returning from Half-Life is the large weapon roster.  You'll use pistols, shotguns, submachine guns, and more against the Combine.  Certain guns have an alternate fire, like a double-barrel blast from the shotgun or a grenade launcher on the SMG. 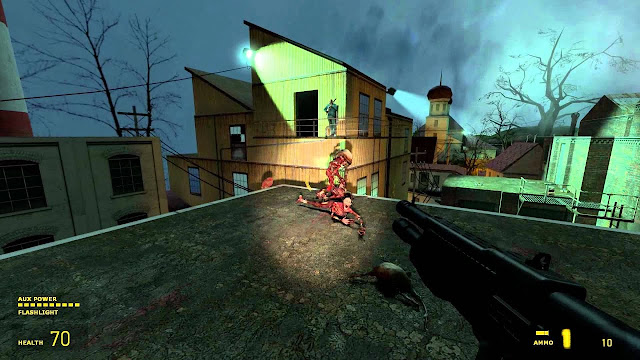 "We Don't Go To Ravenholm" is a highlight for many reasons, least among them is its creepy
atmosphere.
Some items are more situational than others, but the expansive arsenal has no shortage of options.  A handful of new weapons are introduced including the heavy assault rifle and the gravity gun.  If the crowbar was Half-Life's defining weapon, then the gravity gun is the sequel's stand-out.  This device grabs objects and launches them back at high speed.  Tires, barrels, and saw blades become instruments of death with the gravity gun.  Who needs bullets when you have physics?
Stopping the Combine takes the player through City 17 and the surrounding area.  While each chapter features plenty of shooting, it's the situations you are put in that keeps the adventure varied.  You'll trek across the countryside in a hovercraft, run from head crab zombies in Ravenholm, and decimate forces with your supercharged gravity gun.  While Half-Life pitted you against alien and human threats, Half-Life 2's foes are predominantly the Combine.  A couple of chapters focus on other threats, like antlions or head crab zombies, but these are detours at best.
The insect-like antlions become a temporary ally after you acquire bait, which you can use to command the creatures to attack a designated target.  At a certain point, antlions disappear, as does the item's usefulness.  As for head crab zombies, they appear every once in a while before and after you traverse through Ravenholm.  Ravenholm is a ghost town populated with people turned head crab puppets.  A couple of variants are introduced in this section, like fast-moving leapers and poison head crabs, which will reduce your health to one, requiring the HEV suit to heal you.  Despite this, the Combine is an ever-present threat.
You start off facing low-level security guards and other personnel before moving on to stronger variants equipped with heavy assault rifles or shotguns.  The Combine aren't as reliant on booby-traps as the special forces from Half-Life, but they do put up a decent fight.  They take cover, try to flank Gordon, or use grenades to flush him out.  In the chapter "Highway 17," it's possible to be ambushed by the Combine if you go off the beaten path.  At certain points, you will encounter gunships and striders, which double as boss encounters. 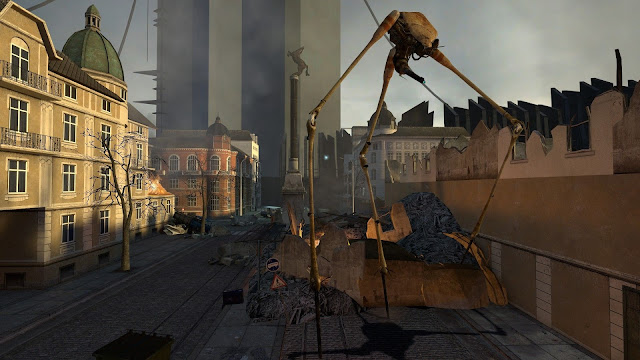 Striders are tough, especially when you have to fight two of them while in a collapsed building.
Gunships and striders require rockets to take down; however, gunships will try to shoot down rockets.  Striders use their long legs to bob and weave around your gunfire.  Striders are the tougher of the two since their weapons can tear through your health and armor quickly if you're stuck in the open.  On the whole, the combat is good, but it could have benefitted from some added enemy variety.  Once you've fought one Combine soldier, you've fought them all.  At least Half-Life 2's episodes fix this problem.
A lack of enemy variety is not the only inconvenience.  The vehicle sections break up the shooting and offer plenty of high-speed thrills, but the stiff controls make them a hassle to drive, on consoles, at least.  About 3/4ths of the way through the game you get the ability to command squad mates, a cool concept, but they aren't the brightest bunch and love to obstruct your path, especially in tight corridors.  Such complaints are minor when you consider how great the whole game is.
It says something when a game from 2004 looks as good if not better than a lot of games that come out today.  Jokes aside, this is an excellent-looking game, regardless if you play it on console or a computer.  Where the visuals shine the most is in the characters.  The facial animations are impressive and go a long way to keep you invested in the story.  Some of the environmental textures look basic and there is a brief but noticeable frame rate dip when you hit a loading spot, but its never anything too glaring.
The physics are remarkable.  Everything has a proper amount of weight and momentum.  The physics aren't too exaggerated, nor are they steeped too far into realism, and the results are satisfactory.  Watching a Combine goon tumble off a building or go flying from an explosion never gets old. 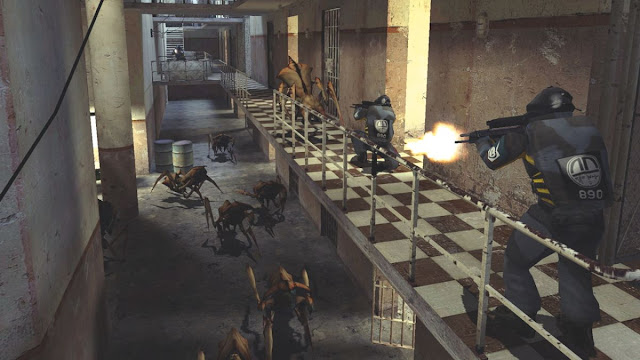 Nova Prospeckt has a bug problem.
Complimenting the stellar visuals is superb sound design. What I liked most about the sound design was the game's use of sound effects.  Little things like using a health charging station or hearing bullets land on the ground when you fire a gun really add to the sound design.  Voice acting is great and the electronic score, though minimal, kicks in at the right moments to intensify the situation.
Games are great for different reasons.  Sometimes, a game is good because of its story, sometimes its the gameplay.  Half-Life 2 is one of a handful of games where every aspect comes together to make for an excellent package.  It's not perfect, no game ever is, but it's a game that delivers on all fronts, never sacrificing anything to keep the vision intact.  The story keeps you engaged just as much as the shooting does, and the gameplay is varied enough that the shooting doesn't become tedious, even though fighting the Combine becomes a bit repetitive.  Half-Life remains one of the genre's best for a good reason, there's nothing quite like it.
FINAL SCORE: 9/10
Posted by William Lowery at 5:25 PM