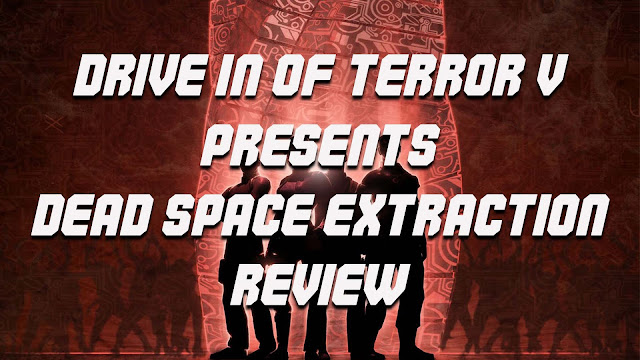 Depending on who you ask, the Nintendo Wii is either a great console or a one-trick pony.  It lacked the horsepower of the Xbox 360 and the PS3, plus the console's library was flooded with shovel-ware.  Many major 3rd party releases either skipped the system or had to be downgraded so it could run properly.  Call of Duty: Modern Warfare Reflex Edition may have preserved the blockbuster action of its HD counterpart, but it looked like someone smeared Vaseline over the graphics.  The Wii's controller, while simple and intuitive, proved to be a challenge for many developers, resulting in games with unorthodox control schemes or unnecessary motion controls.

However, when developers were smart, the efforts paid off.  No More Heroes, MadWorld, A Boy and His Blob, and de Blob are just a few of the many gems on the system.  Give the emphasis on pointing and clicking, the Wii saw a lot of rail shooters.  From ports of classics like House of the Dead 2 to brand new titles like Dead Space Extraction.  Developed by Eurocom and Visceral Games, Extraction explores the collapse of Aegis VII after the colony discovered the red marker, and how a handful of people struggle to escape the never-ending nightmare unleashed on the colony and the USG Ishimura.

On the planet Aegis VII, researchers uncover a marker, an artifact they believe was left by an ancient species, when it is really a duplicate of the black marker found on Earth centuries before.  Its discovery triggers hallucinations and madness across the colony, before it turns into chaos.  People are dying left and right or are coming back as reanimated creatures called necromorphs.  Survivors, including detective Nathan McNeill, Sgt. Gabriel Weller, and Lexine Murdoch, escape the planet and head to the orbiting mining ship, the USG Ishimura.  Unfortunately, the outbreak has reached the ship's inhabitants. 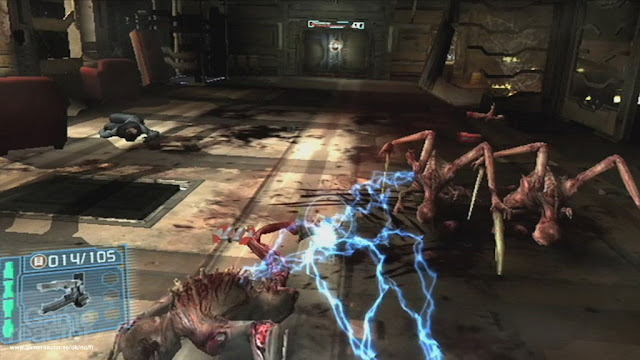 You could say this game is "electrifying."

Rail shooters are the last place to look for a good story.  Games like Time Crisis or Ghost Squad use plot as an excuse to shoot first, ask questions never.  In stark contrast, Dead Space Extraction has an interesting plot and characters.  Series veterans will enjoy witnessing how it all began as well as get a kick out of how it bridges the gap between the two games.  For example, you help reinforce the barricade Isaac destroys to access the medical wing.  It has all the hallmarks the series is known for, including spooky corridors and people questioning reality, but the guided, first-person perspective further accentuates the haunted house feeling of the ship.  And, in a first for the series, the protagonists use the vents to reach parts of the Ishimura, a decision which sparked controversy amongst fans.

Jokes aside, it's an enjoyable science-fiction/horror tale made better by the storytelling.  The action is frequently broken up with downtime devoted to character development.  For as much time you spend slicing limbs off, you spend just as much hearing dialogue.  The steady pace means these sections don't overstay their welcome, and it allows you to gather your surroundings and prep for the next encounter.  While Visceral's name is on the box, much of the credit goes to developer Eurocom, who would take their storytelling expertise and apply it well to the Goldeneye remake.

This may be a rail shooter, but Dead Space's survival action gameplay has been faithfully translated to the Wii.  Aiming the remote to dismember necromorphs gives you more accuracy than a normal controller.  Abilities like stasis and kinesis require simple button presses to activate.  Motion controls are kept to a minimum.  Waggling to Wii remote to shake off enemies is a bit annoying, but other actions like keeping a glow stick active are painless.  As you progress through the story mode's ten chapters, you'll fight necromorphs and solve the occasional puzzle. 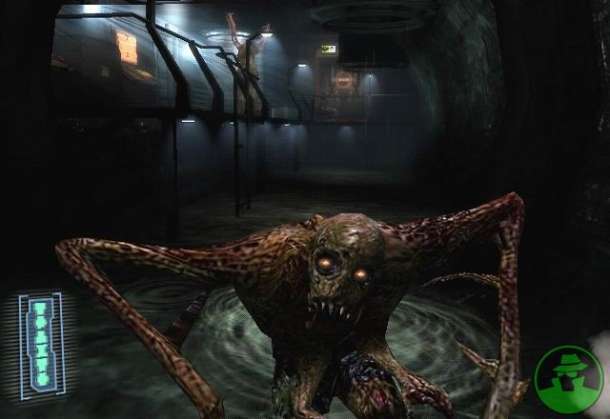 Show him some love...with a plasma cutter.

Dead Space's roster of guns and foes is present, though the rogues' gallery is missing a few faces.  Guardians, wheezers, and dividers are absent, but there is a new boss to fight in the sewers.  The default weapon is the rivet gun and remains in your arsenal at all times.  Weapons are acquired not by finding blueprints but by picking them up when they're found in a level.  The plasma cutter, pulse rifle, flamethrower, contact beam, ripper, and force gun are joined by the P-sec pistol and arc welder.  The P-sec pistol is self explanatory, whereas the arc welder fires off electricity.  Twisting the Wii remote sideways activates the alternate fire.

Weapon upgrades are picked up at random in each chapter.  Successfully beating a stage nets health and stasis upgrades in addition to other things like new levels for challenge mode or issues of the Dead Space prequel comic.  There are moments when the game slows down to let the player look around the level and gather supplies or find goodies.  It only lasts a few seconds, so if you miss something, you'll have to either restart the level or press on.  Checkpoints exist, but if you quit and pick up the game later, you start back at square one from the current chapter.

Besides shooting and watching the story unfold, there are puzzles.  Puzzles involve dragging a beam of energy from one point to the other.  It's nothing complicated, but it breaks up the combat, and there are times when you will fend off enemies will doing such tasks, which adds tension.  Other times there might be a barrier that needs to be reinforced by shooting heated rivet gun rounds at it.  These moments and bits where the characters go into zero-g keep the player involved and help prevent monotony from settling in.

The action may be on rails, but dismemberment remains unchanged.  In Dead Space, headshots don't kill necromorphs.  Shooting their head off turns makes them flail around aggressively like a headless chicken, so go for the limbs.  If things get too hectic, use stasis to slow down incoming enemies or obstacles.  Making use of explosives like fuel tanks or an exploder's severed glowing appendage are great ways to conserve ammo.  Yet, like its HD counterpart, the game isn't too challenging, even on higher difficulties.  Ammo is never in short supply and as long as you remain alert for secret rooms or containers, you'll never run out.  Since its an on-rails shooter, enemies tend to come from one area instead of all over the place like in Dead Space.  After the beating five-to-six hour campaign, there's challenge mode. 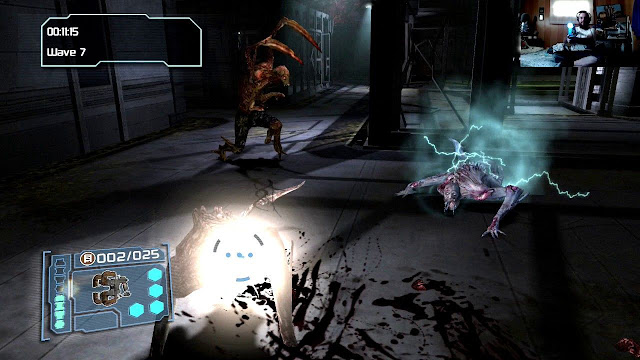 Challenge mode is a score-attack event where players kill waves of necromorphs while trying to reach the end of the selected level.  You start with the rivet gun and one other weapon of choice, but are allowed to pick two other randomly selected weapons once you reach a specific point.  Challenge mode is fun and tests your skill with the combat.  Ammo isn't as plentiful compared to the campaign, so it pushes he or she to be conservative with their resources.  The randomized element adds a curveball to the gameplay since whatever weapons you end up with will require changing tactics.

With impressive camera work and motion capture performances, Dead Space Extraction is a prime example of making the most out of a console's limitations.  It goes for the cinematic approach, but it doesn't feel obtrusive, unlike Resident Evil: The Darkside Chronicles, which went overboard with the approach.  Environments present in the first game are faithfully recreated, with new locations added when necessary.  Some locales look murky, but the overall presentation is solid and is backed by quality sound design.  From a technical perspective, it's one of the Wii's best.

Dead Space Extraction is how you create a game without compromising what the original pulled off.  This may be on the Wii, but what makes a Dead Space game has not been lost.  As a rail shooter, it takes the genre and expands upon what it's capable of.  This isn't a simple yet fun shooting gallery that lasts about 30 minutes to an hour, it's a full-fledged game with a well-crafted narrative backed by top-notch production values.  Dismembering necromorphs might be more fun on the Wii than on the 360 or PS3 since the pointer makes dismemberment a quick yet fun process.  The lack of a proper checkpoint system is irritating and the fact it's on-rails does mean it isn't as challenging as its HD cousin, which wasn't a difficult experience to begin with.  Its positives outweigh the negatives, and its ambition makes it one of the genre's best.

Posted by William Lowery at 1:38 PM