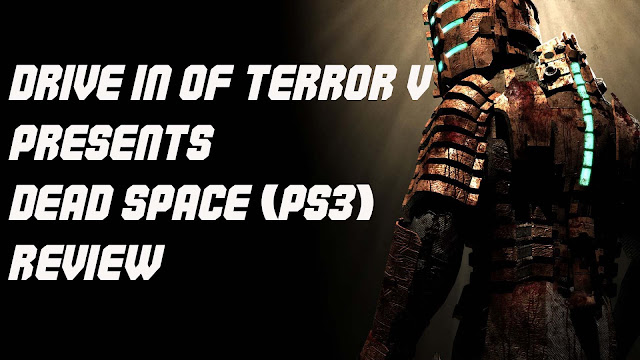 When examining the games from the seventh generation of consoles, one notices how many a franchise came and went within the span of a few years.  Bioshock and Mass Effect come to mind, but one franchise that I think encapsulates the rise and fall of the seventh generation is Dead Space.  Conceived as the west's response to Capcom's Resident Evil, Dead Space roared onto the scene with not just a game, but a plethora of media designed to explore the series' universe.  Yet, two sequels in, and the series ends not with a bang, but a whimper.  At aa time when survival horror shifted away from the frights and to the action, Dead Space tried to strike a balance.

2508.  A team is sent to investigate the USG Ishimura, a mining ship last reported orbiting Aegis VII.  No one is there until the team gets ambushed by creatures called necromorphs.  The crew's engineer, Isaac Clarke, is cut off by the attack and has to make it on his own.  Isaac searches for his survivors, including his girlfriend Nicole, who works on the ship and had left him a video message before he departed.  Isaac reunites with the surviving members of his team and is sent out to get things in running order so they can get out.  As he ventures into the bowels of the ship, he learns more about what caused the outbreak and why.

Dead Space's tale of intergalactic horrors takes cues from many popular works, most notably Alien, The Thing, and Event Horizon, and though the plot is familiar fare, what carries the experience is the strong storytelling and unnerving atmosphere.  Dead Space is at its scariest not when monsters are bursting out, but when you are on your own, making your way through a rundown ship while feelings of dread and isolation slowly creep in.  While many people compare this game and its tone with Alien, it reminded me more of The Evil Dead.  The story set-up is similar and who we think survives doesn't and the one we think won't survive becomes the hero, plus it ends with the protagonist thinking the evil has been vanquished, or so it seems. 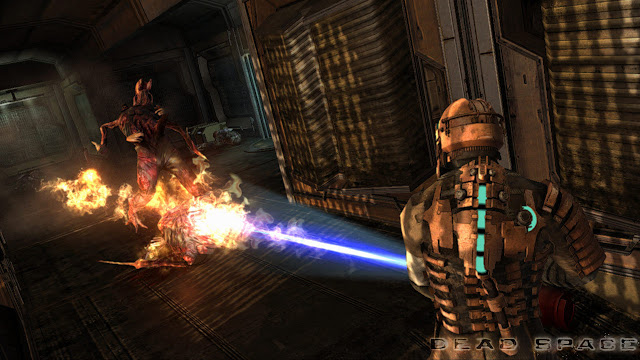 Isaac Clarke is Ash Williams, a normal guy forced into an unexpected situation, and what edges him on is his love Nicole, similar to Ash and Linda.  Much like Sam Raimi's horror flick, Dead Space doesn't shy away from the violence, which is brutal and shocking.  You'll see deranged doctors lobotomizing tied-down crewmen and people getting skewered by necromorphs.  By making Isaac a silent protagonist, it puts the player into his shoes and allows him or her to react to the situations as they unfold.  The only voice emanating from Isaac is his grunts when he's under attack or his heavy breathing when in the vacuum of space.

While the games does a great job at creating tension, it relies too much on jump scares.  When done right, jump scares are an effective way of frightening viewers when they least expect it.  Dallas' journey into the vents during Alien is a fine example, but most of the time it is used as a cheap thrill, and Dead Space is no exception.  See a necromorph lying in the middle of a hallway?  It's a trap.  Occasionally, it works, like when a necromorph jumps into a vent, only to suddenly burst out from another vent behind Isaac, but all other instances fall flat.

Where Dead Space falters in its horror, it shines in its storytelling.  The haunted house in space concept is nothing new, but what carries it is how the story is told.  Taking a cue from Bioshock, the environment tells the story that the dialogue doesn't.  Audio logs and text logs give insight into what happened on the Ishimura as people went mad, killed each other, or worse.  Blood-stained walls contain cryptic messages made even more confusing by the symbols they are written in.  Using this information, the player starts piecing together what went down and how things like the Marker connect in the grand scheme of things.

Dead Space is a third-person survival action game none too different from Resident Evil 4.  As Isaac completes objectives and explores the Ishimura, he fights off the terror that is necromorphs.  Necromorphs may be reanimated corpses, but they come in many grotesque shapes and sizes.  Some leap through the air like flying squirrels, some spew out swarms of tiny creatures if hit in the wrong spot, while others look like the "Return the Slab" guy from Courage the Cowardly Dog.  Yet, they share one thing in common: killing a necromorph requires dismemberment. 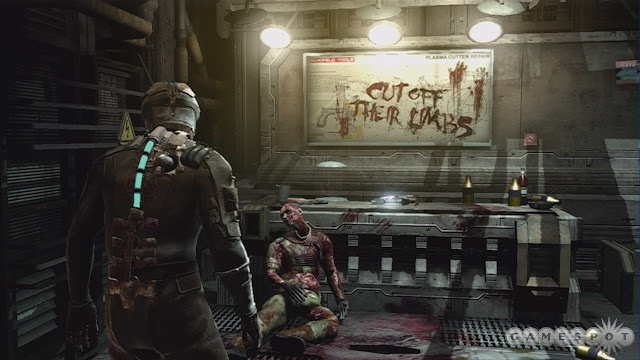 Seems obvious to me.

Tight controls make it a cinch to cut off limbs and move around to ensure enemies don't overwhelm you.  Isaac's HUD is tied to his RIG outfit.  The blue spinal column represents his health and changes color depending on his status.  Pressing Back or Select pulls up his monitor, allowing the player to manage inventory, view the map, or check any data collected along the way.  Unlike Resident Evil 4, the game doesn't pause when going into the sub-menus, so make sure the coast is clear before checking.

Isaac starts with the plasma cutter, a quick, precise device handy for shooting limbs off.  What sets the arsenal apart is most of the weapons aren't legit guns, just mining tools which so happen to double as handy monster slices, except for the pulse rifle.  New weapons are found by acquiring blueprints and unlocking them for purchase in the store.  Isaac can hold four weapons in his inventory, and the game encourages players to experiment with what's available.  Some guns are more situational than others, like the flamethrower, but the roster is nevertheless diverse.  To upgrade weapons and gear, you need nodes and a workbench.

Upgrades are split into branching paths that require inputting nodes to reach an upgrade.  Nodes are found in the environment or are purchased at the store.  Nodes also unlock certain doors which lead to rooms filled with various resources.  Strategy comes into play when deciding if you want to use nodes now or wait until you find more.  Upgrading equipment is a satisfying sense of progression.  You feel Isaac is getting stronger as his suit receives new layers of armor or guns sound meatier than before.  The sequel improves on this system by letting you undo all your upgrades to try a different approach, but that's for another time.

Isaac's journey takes him across the Ishimura and down to Aegis VII.  Isaac will need to step out into space to complete certain tasks, and the player must be mindful of how much oxygen is left in addition to any threats that may be out there.  The zero-g sections are fun, though having to leap from platform to platform is clunky.  Being an engineer is dandy and all, but with all of those guns at his disposal, you need something to shoot at.  As mentioned before, necromorphs vary in look and attack.  The most common type is the slasher, whose protruding arms with bony appendages indicate where the player must shoot.  Other types include the leaper, infector, exploder, and pregnant.  Tougher variants of some enemy types arrive in the second half. 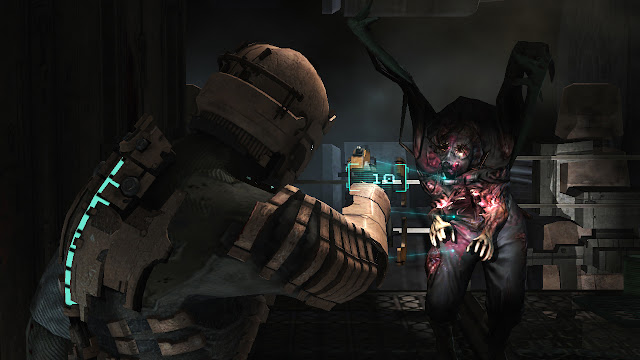 As the game progresses, slashers become the least of your worries.

To slow down fast-moving enemies or hazards, Isaac uses stasis.  Stasis consumes energy but is refilled via stasis packs or recharge stations.  Telekinesis is used to move stuff or throw it at something, and he has a curb-stomp to finish off crawling enemies.  Combat is exciting and the enemy roster keeps the player alert for what lies ahead, but on Normal, it's a bit of a cakewalk thanks to plentiful resources.  Even the final boss, while a spectacle, is easy to kill since his orange pustules indicate where you need to shoot.  Playing on Hard is a must since enemies are more aggressive and resources aren't readily available.

Visually, the game looks great.  The Ishimura and its different sections clue the player in on what life was like on here before it went to hell.  The ship is as much a character as the characters are.  On PS3, I encountered a lot of lag during in-game action, and it's only on this version as the 360 and PC versions run well.  Dead Space relishes in its violence as much as it does scares, and nowhere is this made clearer than in the many ways Isaac can die if one is not careful.

Sound is just as good.  Monsters emanate a host of screams ranging from loud to ominous to creepy.  When entering space, all sounds become muffled, except for the deep breaths of Isaac as he tries to make it to an oxygen-filled zone.  Weapons sound powerful and rip through flesh like the tools of destruction they are.  The voice acting is equal parts solid and deranged to highlight how insane any surviving crew of the Ishimura has become, and the music is excellent, evoking the likes of Alien and Aliens with its calm but eerie ambience or its bombastic nature when the action heats up.

Dead Space is a remarkable game.  Though its story is familiar, its direction is superb, and its intriguing lore draws players into wanting to look for answers.  The monsters aren't the scary part, it's the feeling of being watched when nothing is there.  The emphasis on dismemberment sets the gameplay apart from its contemporaries, turning you into a master amputee.  Just make sure to play it on something higher than Normal to get the most out of the combat.  Dead Space isn't for the faint of heart, but is an exhilarating experience.

Posted by William Lowery at 1:39 PM