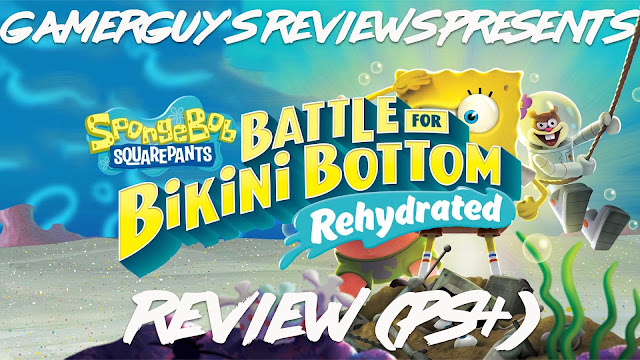 THQ epitomized video gaming of the 2000's.  They were the middle ground between large publishers like EA and smaller publishers like Eidos.  At its peak, THQ pumped out original games such as Red Faction, Destroy All Humans, and Saints Row, while also publishing licensed titles based on properties like Evil Dead or SpongeBob SquarePants.  Following its death and rebirth as THQ Nordic, the studio started reviving a lot of the former publishers classics.  With a new coat of paint and several quality-of-life improvements, SpongeBob SquarePants: Battle for Bikini Bottom Rehydrated intends to remind gaming veterans of the good old days while updating the experience for the modern age.

Plankton is up to no good.  Having finished building an army of robots, he aims to use the machines to attack his rival the Krusty Krab and steal the secret formula.  Instead, his mechanical army turns against him after Plankton accidentally flips the command switch to "Don't Obey."  The robots escape and wreak havoc on Bikini Bottom.  When SpongeBob sees a news report showing what is happening, he calls upon his friends to help take down the rising robot riots.  Little does he know Plankton is trying to manipulate the sponge into helping him get back into the Chum Bucket, so he can regain control of his robots and resume what he had intended.

Take the plot for aa 12-minute episode, stretch it into a seven to eight-hour adventure, and you have the game sitting in your disc tray.  The story is not spectacular, but the set-up fits perfectly within the context of the source material.  SpongeBob is not known for having insightful plots.  It is about making people laugh, and the game has plenty of laughs to go around.  The writing is stellar and does an excellent job at translating the characters from television to video games.

SpongeBob is a goofy, naive individual who always does his best, even if he fails to realize he is being toyed with.  Meanwhile, Mr. Krabs takes the opportunity to profit from the crisis any way possible.  The game's charming, upbeat nature never ceases to put a smile on one's face.  Plus, the visuals enhance the feeling of being in the nautical city of Bikini Bottom with its warm, colorful graphics.  Video games live and die on gameplay, not presentation, and though the gameplay is atypical for the genre, it is enjoyable.

Battle for Bikini Bottom Rehydrated is a 3D collect-a-thon platformer inspired by the likes of Super Mario 64 and Spyro the Dragon.  The goal is to free Bikini Bottom from Plankton's mechanical menace.  SpongeBob does this by traveling to various locations, completing tasks, and collecting knick-knacks of varying importance.  Platformers succeed or fail based on their controls and fluidity, and the game does not falter with either of those.  The controls make platforming a cinch to do, which is good because the latter half of the experience is filled with pits and other hazards waiting to claim SpongeBob and company.

Everyone's favorite yellow sponge can move, jump, attack enemies with his bubble wand, and perform a ground-pound.  Throughout the adventure, SpongeBob learns new techniques from Bubble Buddy.  These include throwing a bubble bowling ball to hit buttons and baddies from a distance, hitting targets above him with a bubble helmet, or conjuring up a bubble torpedo to hit hard-to-reach things.  Aiding SpongeBob are Patrick and Sandy.  Most stages feature a bus stop allowing you to swap characters.  Patrick is the heavy-hitter.  His belly slam stuns enemies and he can throw objects like watermelons to hit buttons or launch himself across a gap if he is standing on a platform.  Sandy the Squirrel uses a lasso to hog-tie robots from a distance, glide across gaps, or swing from specially marked anchors.

All of these powers and their respective characters will be put to good use while venturing through Bikini Bottom.  Locations include Jellyfish Fields, Goo Lagoon, Rock Bottom, and Kelp Forest; sadly, there is no magic conch to consult.  Each level features a mixture of combat puzzle-solving, and platforming.  Getting into the Chum Bucket requires 75 of the 100 golden spatulas strewn across the game.  Spatulas are earned through a variety of different means.  Some of them are acquired by finding a certain number of items for someone, like finding 15 of Patrick's socks or paying Mr. Krabs X number of shiny objects, the game's currency.

A lot of the concepts have been done plenty of other times in similar titles, but the game's concepts never run on fumes.  The game is not a total cakewalk, either, as some of the puzzles are quite tricky to solve.  Combat is simplistic, but the different robot types keep things engaging.  Plankton's robots come in a variety of shapes and sizes.  Small robots armed with an electric prod only take a hit to destroy, but others, such as the tartar sauce launchers or the ones stacked like a totem pole require two or three hits to take down.  Always keep an eye out for Duplicatotrons, machines which keep conjuring enemies until the device is destroyed.

While SpongeBob and Patrick have to get up close and personal, Sandy lassos them, removing any danger these goons normally pose.  Disappointingly, the boss fights are easy.  Each encounter boils down to "dodge attacks, wait for them to get tired, and hit them when vulnerable."  The only exception is the fight against Robo-SpongeBob since you have to destroy all the weak spots dotted around the body, and in the fight's second phase, SpongeBob journeys inside the mechanical behemoth to defeat him for good.  Since this is a remake, it would have been neat to give these old bosses new tricks to surprise players with.

As mentioned earlier, the game treats death like a slap on the wrist.  If SpongeBob or any of the other character die, they immediately respawn with no penalties whatsoever.  The game autosaves after each checkpoint, character swap, or collectible found, so losing a lot of progress is never an issue.  However, the knockback from taking damage is a bit excessive.  Nothing says fun like falling into a pit because a hit from tartar sauce launched SpongeBob back a good two to three feet.  Purple Lamp Studios did introduce a few minor improvements to improve the flow of gameplay.  In the original, any tutorials you came across automatically played, but Rehydrated fixes this by making the tutorials signs you interact with.  The tighter controls make the downhill sliding sections easier to handle.

Purple Lamp Studios also added multiplayer.  It is a horde mode where one to two players fight off waves of enemies while avoiding attacks from a mechanical Squidward.  This mode lets gamers play as characters not playable in the main game like Squidward, Mr. Krabs, or even Gary the Snail.  Unfortunately, I was not able to test this mode, but according to other players, the mode is disposable and not worth putting time into, although it does incorporate cut content from the original game, namely Robo-Squidward.

Battle for Bikini Bottom Rehydrated is a drastic improvement over its 2003 release in the graphics department.  The visuals are vibrant and pleasing to look at.  The developers nailed the look of the show and it is great to explore locales such as SpongeBob's pineapple house or Sandy's tree-dome and catch all the visual references sprinkled about.  Since the game originally released in 2003, most of the gags are nods to stuff from seasons one to three, though there are a few new nods to the recent seasons.  For example, one of the paintings in Squidward's house is of "Handsome Squidward."  Stand around long enough and SpongeBob or Patrick will give the exaggerated face you see in a lot of SpongeBob-themed memes.

Rather than redo the voice work, the remake utilizes the original voice recordings with the masters cleaned up.  The quality is good and though there is a slight graininess to the voices, it never sticks out.  The performances themselves are solid and the dialogue is hilarious.  Clancy Brown nor Ernest Borgnine voiced their characters Mr. Krabs and Mermaid Man in the original game, opting instead for soundalikes.  The soundalikes are awful, sounding less like genuine impressions and more like knockoffs.  On the flip side, the music is great, whether it is the ukuleles of the Bikini Bottom hub world or the surf rock of Goo Lagoon, all the tunes are catchy.

SpongeBob SquarePants: Battle for Bikini Bottom Rehydrated is simplistic yet fun.  The feel-good slapstick tone of the adventure never ceases to delight.  Contrary to certain gaming outlets, the game is less a disaster and more a wonderful if routine adventure.  The 3D platforming gameplay is not groundbreaking, but it is well-polished and keeps the action focused.  Even when the difficulty ramps up, it never becomes frustrating due to its forgiving nature.  Battle for Bikini Bottom Rehydrated is a prime example of the mid-tier game, a title which is not revolutionary but simply a fun time anybody can enjoy.  Sometimes, the best games are the simple ones.