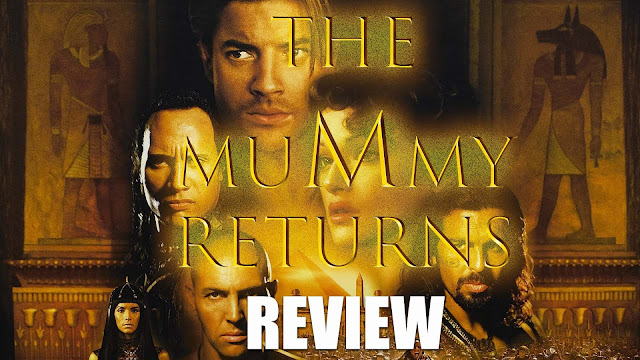 On the weekend of The Mummy's release, Universal Pictures called Stephen Sommers and told him, "We need another one."  Never has a sequel received such a fast-track to production, but given the movie's success, who could blame them?  There were many ways to approach this follow-up, and The Mummy offered potential beyond Imhotep.  Egypt is home to many gods and people of nobility, and as long as there are mummies to find, the cash keeps flowing.  Alternatively, there is the opportunity to explore different takes on mummification, such as the mummies of Central America.  Such talk is speculative, as The Mummy Returns brings back not only the O'Connell's and Imhotep but introduces a new threat who is bigger, stronger, and looks like a certain pro wrestler turned actor.

After defeating Imhotep and riding off into the sunset, Rick and Evelyn married, had a son, and live happily in their rich estate thanks to the wealth of Hamunaptura Beni dragged out before his demise.  However, while on an excursion in Egypt, the family unearths a mysterious bracelet belonging to the Scorpion King, a fearsome warrior who once controlled the armies of Anubis and used them to terrorize the world.  When their son Alex gets curious and tries the bracelet on, he inadvertently sets into motion the return of the dreaded individual.  Unbeknownst to our heroes, Imhotep is found and brought back with the help of his cult led by a mysterious woman who knows an awful lot about the cursed priest.

On paper, The Mummy Returns has the pieces for a great sequel.  The cast is back, original writer and director Stephen Sommers is at helm once again, and the set-pieces are crazier.  Forget running away from sand faces or hungry beetles, this time the threats include walls of water and armies of jackal soldiers.  It has the necessary ingredients and seems like a win, but it is not.  By no means a bad movie, the bandages holding The Mummy Returns together unravel in the story department.  What made the original work was not only its characters and action, but its plot.

It was an adventure with an easy-to-follow narrative, but the sequel's story is muddled with exposition and reliance on introducing MacGuffins.  The first film used exposition but when necessary.  The Mummy Returns introduces new twists and turns every five minutes, be it the bracelet, a new destination to travel to, or a device which turns out to be a tool for killing the big bad.

At least the dialogue retains the quick, snappy pace of its predecessor but with the amount of information being unloaded, it can be a bit excessive.  While the story takes a step back, the characters receive quite a bit of development, even if some of the material is contrived.  The strongest element is Rick and Evelyn's relationship.  Eight years have passed, and in this time, they have changed, but not without retaining what makes them click.  Evelyn is no longer a closeted researcher but a tough archaeologist who gives Lara Croft a run for her money.  She holds her own and is no longer a damsel in distress Rick needs to save all the time.

Rick is still a cocky hotshot, but the new roles of father and husband have softened him.  Yet, in an ill-fated movie, we discover him and his wife are destined for something bigger in their own ways.  Rick learns he is a hidden Medjai warrior which is odd because in the first movie he had to gain the trust of Ardeth Bay before they could defeat the mummy.  If Ardeth knew Rick was one of his own, how come he never told him then?  Evelyn discovers she is the reincarnation of the Pharaoh's daughter Nefertiri, which explains why she suddenly became a capable fighter.

Flashbacks show she had a rivalry with Anck-Su-Namun, who has also been reincarnated but in body only.  When Imhotep is brought back, he has her kill herself so he can perform the spell to bring his lover's soul back.  It was unnecessary to to tack on such destinies to these two.  What made Rick and Evelyn work was they were polar opposites.  To make them secret ass-kickers takes a way a bit of the spark.

On the other hand, Imhotep's role is greatly expanded.  In The Mummy, we hardly sympathized with the high priest since he spent most of the runtime as an evil creature who sucks people dry.  Here, it does not take long till he has sucked the life out of a few poor souls to restore his youthful condition.  The viewer feels glad for him now that he and his squeeze are back together after thousands of years.

He is still the bad guy vying for control of Anubis' armies, but at least he is no longer a simple scare machine.  The final act makes us even empathize with the poor guy when Anck-Su-Namun chooses to abandon Imhotep as him and Rick struggle to get out of a pit leading to hell.  Evelyn choosing to rescue her husband makes him realize what love truly means, so he lets himself go rather than chase after Anck-Su-Namun since he knows how futile it would be.  In a twist of ironic, Anck-Sun-Namun meets her end by falling into a pit of deadly scorpions, much like how Imhotep suffered the same with the scarabs way back when.

All of this cannot be applied to the Scorpion King.  While there is a novelty to seeing Dwayne Johnson in his first film appearance, the introduction is the only time we see him in the flesh.  For the climax, he comes back as a poorly rendered half-man/half-scorpion monster.  Bad special effects aside, it was a missed opportunity to make the Scorpion King a legitimate antagonist, one who is brasher and eviler than Imhotep.  Maybe have the two work together before Imhotep realizes how dangerous he really is.  The Scorpion King lacks purpose, and what should be a stand-out opponent is an underwhelming character.

However, the secondary cast picks up the pace.  Though the introduction of a kid sounds like a disaster, Alex does not come off as a nuisance, a Jake Lloyd whose behavior and dialogue distract from the experience.  He has his father's brash nature but his mother's love for archaeology.  Even after being kidnapped by Imhotep's cult, he stands up for himself and is resourceful when the opportunity calls for it.  Jonathan returns and is delightful as ever.  He has fallen on hard times since he blew his share of the treasure on gambling but getting caught up in another quest to save the world gives him the chance to find purpose, and occasionally be a lifesaver.

With a bigger budget, the action sequences are more extravagant.  There is shooting, fisticuffs, and chase scenes set in the streets of London, along the Nile River, and at the Scorpion King's hidden oasis.  The hunt for the Scorpion King takes the good and bad guys all across Egypt, meaning we get some spectacular vistas.  At times, it does scream "been there, done that," like with the pygmy mummies, who replace the scarabs as the tiny but deadly threat.  The film's low-brow humor becomes prevalent when these guys are around, as their mischievous behavior apes the Gremlins.  Although the budget is larger, the effects are not as good.  Some are alright, but the rest look lousy, especially the Scorpion King.

I get what Stephen Sommers was going for, having a man/creature hybrid in the vein of something from Jason and the Argonauts or Sinbad, but it looks unfinished.  The fight scene between Rick, Imhotep, and the Scorpion King looks like a video game, even the set they fight on seems to be ripped straight from Mortal Kombat.  The wall of water sticks out like a sore thumb too, especially with how doughy and untextured Imhotep's face looks.  Alan Silvestri takes over for Jerry Goldsmith, and though the music is good, it lacks the distinctness of Goldsmith's compositions.  The main theme is excellent, but if you asked me to recall any other tunes, I would be hard pressed to come up with a response.

The Mummy Returns is a decent but underwhelming sequel.  The cast is excellent, and it retains the fun, adventurous tone of its predecessor.  Yet, a weak story mires the film.  An overabundance of exposition combined with a disappointing new antagonist drags things.  When new plot details combined with arbitrary plot devices are unloaded every few minutes, it is hard to stay invested.  Maybe it was not the best idea to quickly rush out a sequel, maybe then the results would not have felt as underdeveloped.  Even the effects have taken a step back, and while the previous installment holds up visually, the sequel shows its age, badly.  The Mummy Returns is the Ghostbusters II of action-adventure flicks, an enjoyable film which retains what works, but lacks compelling material to get behind.