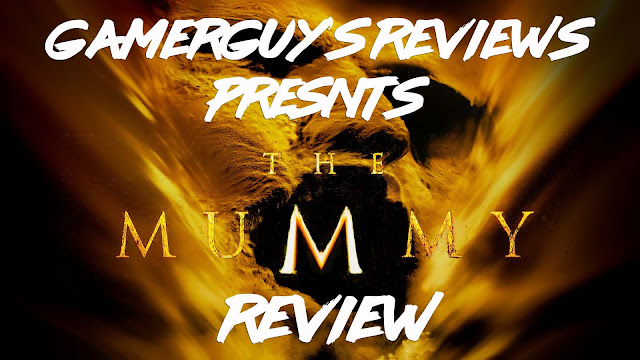 Before Freddy Krueger and Jason Voorhees terrorized the screen, the Universal Monsters ruled the roost.  Though most people associate the Universal Monsters with failed reboots and the occasional gem, there was a time when these mythical creatures meant big bucks for Universal Pictures.  From the 1930's to the 1950's, the Monsters were synonymous with horror, until the Atomic Age ushered in a new era of horrific beasts.  Of the 20-plus movies Universal created, The Mummy is one of the interesting entries.  The 1932 feature follows a mummified priest who is inadvertently resurrected and seeks to bring back his long-lost love.

It is a tragic romance and not a run-of-the-mill creature feature.  The sequels, including a crossover with Abbott and Costello, fulfilled the schlocky quota.  When Universal Pictures attempted to remake the movie in the 90's, filmmakers like Joe Dante and George Romero wanted to do a modern update of the tale, but their proposals were rejected.  Then, an up-and-coming director named Stephen Sommers pitched his take, a rollicking adventure in the vein of Indiana Jones, with a dash of Ray Harryhausen fantasy film mixed in.  Universal gave the go-ahead and The Mummy was reborn as an action flick starring George of the Jungle.

3,000 years ago, the high priest Imhotep (Arnold Vosloo) attempted to resurrect the Pharaoh's mistress Anck-Su-Namun after she took her own life, but his plan is thwarted by the Medjai, Pharaoh's bodyguards.  As punishment, Imhotep is cursed with the Homdai, which involves mummifying him alive and putting him into a sarcophagus with ravenous scarabs.  Should Imhotep be revived, he will wipe out the world.  In the 1920's, former French legionnaire Rick O'Connell (Brendan Fraser) guides novice researcher Evelyn (Rachel Weisz) and her brother Jonathan (John Hannah) to Hamunaptura on a quest for the city's loot.  Instead, they find Imhotep's sarcophagus buried at the feet of Anubis.  When Evelyn gets the idea to read from a sacred book the rival expedition found, she awakens Imhotep.

Remakes come in two flavors.  Either they retell the story beat for beat or take the premise and spin a new tale around it.  The Mummy chooses the latter.  The idea is the same, but the characters and situations surrounding it are new.  Plus, instead of being a shuffling bandaged person who becomes a mostly normal-looking human being, Imhotep is a decayed skeleton who gradually turns human by sucking out the organs and fluids of his victims.  The movie is not a slow burn, but a fast-paced rollercoaster ride filled with action, humor, and romance.  What sounds like a product disrespecting its source material is actually a fresh take on an established concept.

Writer/director Stephen Sommers knows how to keep things going.  The dialogue is quick, snappy, and knows when to slow down to explain the situation and what the stakes are.  It is also funny.  Never does the comedy detract from the experienced and is timed just right.  For example, when Rick is about to be hanged for "looking for a good time," he asks the hangman to let him go.  The hangman discusses the request with the warden (Omid Djalili), to which the warden points out how the hangman looks like an idiot for thinking they would let Rick free in the first place.  The characters, even the questionable ones like Beni (Kevin J. O'Connor), are all likable for their eccentricities.

A period-piece adventure needs a charming protagonist who can hold his own against mummies while delivering a sarcastic quip or two.  Brendan Fraser excels as Rick O'Connell, a man who exhibits the right amount of charm and cockiness.  He may be armed to the teeth at all times, but he is not the best people person, especially when he tries hitting on Evelyn, which backfires 80 percent of the time.  Some will argue he is an Indiana Jones clone, but his ironic behavior makes him more like Nathan Drake than the rugged archaeologist.  He thrives on adventure but is not prepared for dealing with 3,000-year-old supernatural corpses.

Evelyn is the polar opposite.  She is interested in Egypt's history because of her father and wants to carry on his legacy, but her endeavors have not brought her success, until she saves Rick from his hanging.  Her relationship with Rick opens her up.  She goes from being quiet and reserved to open and helpful.  Unfortunately, she does fall victim to the "damsel in distress" cliché, especially in the second half where a lot her scenes amount to being cornered by Imhotep, only for Rick to show up and save her.

All of the other characters, good and bad, play on established tropes.  The Americans that make up the competing expedition are gung-ho opportunists who care nothing more than about finding treasure, which bites them when they least expect it.  The slimy, traitorous Beni will work with whomever faction so long as he is rewarded.  The Mummy has a strange yet fitting moral about how greed backfires on those who get blinded by it.  Most of the secondary cast is killed because their cockiness gets the better of them.  Even the destruction of Hamunaptura during the climax is the result of the weaselly Beni being exhausted from hauling treasure out of the ruins.  When he rests on an arm sling, it just so happens to be the lever which triggers the place's collapse.

It is bizarre but goes to show how scummy most of the cast is.  Some of them are more stereotypical than others, such as the Arab warden who is fat, lazy, and greedy, but it never reaches the point of being offensive.  It scrapes by with the fact it is a period piece and as such, things like pillaging an ancient civilization for loot was considered the norm instead of a violation.  The only exception is Jonathan because someone is always around to snap him out of it before his personal vices do him in like the others.  The film is called The Mummy, not Treasure Hunters Explore Egyptian Ruins, and the titular characters is in some ways similar and different to his 1932 counterpart.

Physically, he goes against the typical characteristics of a mummy.  He is a decaying, rotting skeleton who regains his youthful looks, plus he can do things like turn into sand to slip through keyholes or resurrect his mummified priests using black magic.  He looks horrific, but Imhotep walks the fine line between realistic and fantastical so as to preserve a PG-13 rating.  However, he shares the same goal as Karloff's Imhotep, which is to bring back the only person he ever cared for.  Yet, Arnold Vosloo's Imhotep relies on special effects to get what he needs because if he tried the persuasive approach, then the special effects team does not have much to do.

Both Mummy movies are great for their own reasons, but if the original had an advantage, it is Imhotep.  The viewer sympathizes more with Karloff than Vosloo, since the former is a tragic character, while the latter is a vicious killer.  The second half of the movie plays to this notion as Imhotep spends his time stalking the Americans and British Egyptologist (Jonathan Hyde) in the streets of Cairo, killing them when the time is right.  It is hard to sympathize with a mummy who spews out flies and eats scarabs like candy.  Imhotep's sole function is to act as the centerpiece for the film's special effects, and the humanity which defined the original mummy is diminished because of it.

Though it came out 21 years ago, the effects have aged well.  At times, the visuals show their age, like in the scenes where a scarab works its way up someone, but one can appreciate the creativity and ambition of what it is on display.  The best bits are the opening shots of ancient Egypt in its prime, simply for how it emphasizes the grand scale this movie is going for.  On a similar note, Jerry Goldsmith's score is amazing.  The music is a great mixture of Middle Eastern and action-adventure themes which sell the adventurous but exotic tone.  It can be calm and serene one moment then loud and bombastic the next.

The Mummy is a solid action-adventure flick and a commendable update of the 1932 film.  By gearing this towards high-stakes adventure, things move at a breakneck pace and never stop.  The emotional depth the original had is lost, but it is made up for by strong characters, witty, energetic dialogue, and great sense of fun and adventure.  Rick O'Connell is the perfect protagonist for such a flick, as his self-referential, hotshot attitude fits the pulpy tone.  Imhotep might not be the most complex villain, but he goes against the grain of what we consider a mummy to deliver something unique yet threatening.  The Mummy succeeds at doing its own things and never does the experience feel excessive.