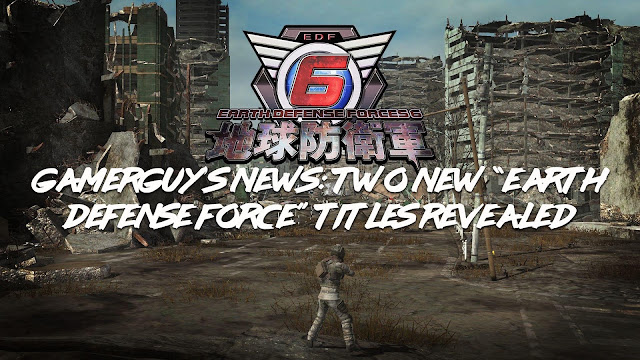 The cult-classic series "Earth Defense Force" lives on with the announcement of not just a sixth installment but another spin-off.

The images show the Ranger in a dilapidated, rundown city overpopulated with enemies.  No further details nor a trailer have been revealed as of this writing, but this could change in the next few months.

On the flip side, both literally and figuratively, a spin-off was announced.  "Earth Defense Force: World Brothers" swaps out the realistic graphics of past games for a blocky art-style inspired by titles like "3D Dot Game Heroes."

The premise is that world has been broken into pieces and as such, has left the Earth Defense Force scattered.  The trailer reveals it is possible for characters to fall of the world if they are not careful.

Up to 100 characters can be recruited, and as stated prior, the roster includes individuals from the series and other D3 titles.  From the PS2-era soldier and Pale Wing to 4.1's Air Raider and Fencer, it seems developer Yuke's intends to have a little fun with the series' past.

An "Earth Defense Force" game is not complete without aliens and other baddies to kill, and rest assured there will be plenty of shooting to go around.  Keeping with the theme of pulling from the past, the roster consists of creatures old and new, from ants to spiders to the H.G. Wells-inspired designs of the Hectors from the PS2 titles.

For 17 years, the series has entertained gamers with its over-the-top shooting and addictive loot system.

Initially a budget title in the "Simple Series 2000," "Earth Defense Force" became the quintessential "B-game."  What it lacks in the technical and storytelling departments it makes up for with its fun.

Previously, the only time the series had traded hands with a different studio was 2011's "Earth Defense Force: Insect Armageddon."  It appears Yuke's is becoming the go-to secondary team for developer Sandlot after Yuke's made "Iron Rain."

When more information on "Earth Defense Force 6" is dropped, the GamerGuy will be there.  Killing ants, spiders and robots is a dirty job, but someone's got to report on it.

Posted by William Lowery at 9:05 AM