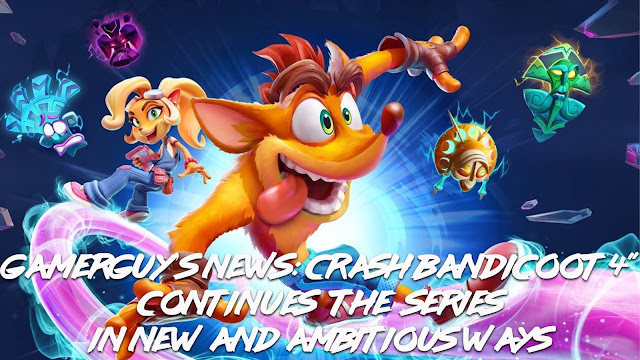 After an unofficial leak last week, "Crash Bandicoot 4: It's About Time" was officially revealed yesterday and aims to act as the proper continuation to the original trilogy, ignoring the numerous sequels that followed it.

The reveal during IGN's Summer Game Fest showcased the 2.5-D gameplay the series is known for and how developer Toys for Bob is expanding upon the mechanics.  The trailer highlights new moves such as rail-sliding on top of and under rails, as well as wall-running.

"Crash Bandicoot 4" also introduces masks Crash Bandicoot acquires as the adventure progresses.  Two of the four were revealed, those being Kipuna-Wa, which slows down time, and Eka-Eka, which alters gravity, allowing Crash to run on ceilings.

Speaking with Geoff Keighley, Toys for Bob chief creative officer and co-studio head Paul Yan said the studio chose to call it "Crash 4" because they wanted to key it off the original trilogy from Naughty Dog.

"It's not just 'Crash 4' because narratively we are continuing off of where 'Crash 3' ended.  It is bringing back that authentic, wholly unique to Crash gameplay, which is the unique perspective shifts of going into camera, being chased by things running out of camera or switching to side-scrolling," said Toys for Bob design producer Lou Studdert in an interview with IGN.

Regarding the story, after being banished to a realm between space and time, series antagonist Dr. Neo Cortex escapes and is looking for revenge.  Crash's adventure takes him through various time periods and dimensions.

"While we are retaining the old-school gameplay of those unique perspectives, we wanted to open up the worlds from a visual standpoint," Studdert said.

The developers said difficulty is being fine-tuned to be challenging yet fair.  Two modes of play will be available, retro and modern.

Retro retains the old-school difficulty of its predecessors, complete with lives, while Modern is more accessible, going so far as to replace lives with checkpoints.

Wumpa fruit now doubles as a collectible and a currency, though what it can be used to buy remains under wraps.

After "Crash Twinsanity" toyed with the idea of playing as multiple characters, "Crash 4" expands on the concept.  Players will not only be able to play as Crash or Coco Bandicoot, but Dr. Neo Cortex.  More characters will be revealed as it gets closer to release.

Titles like "The Wrath of Cortex" and "Crash Twinsanity" tried to keep the series alive but with mixed results.  Developer Toys for Bob is hoping to do the series justice after the recent remakes brough the bandicoot back into the public eye.

"Crash Bandicoot 4: It's About Time" releases on October 2 for PlayStation 4 and Xbox One.