Heads Up: Doom Eternal Review Now Available to Read on the Student Printz!

Let me preface this post by saying this review I wrote for the newspaper only scrapes the surface of what this game offers.  500 words is not enough to summarize the raw, majestic power that is Doom Eternal.  The 2016 reboot is a fantastic shooter, an excellent hybrid of old-school shooting mixed with modern game design, with combat that encourages aggressive play against the enemy.  It was brilliant, and one could only wonder how ID Software was going to up the ante for the sequel.

Well, they didn't just knock it out of the park with Doom Eternal, they sent the ball into frigging space.

At first glance, it seems like the same stellar combat from Doom, but then you immediately notice the difference in its flow and rhythm.  Playing Doom Eternal requires a specific mindset.  You can not charge into firefights blindly, especially on Ultra Violence or Nightmare.  Doing so guarantees swift death.  You must be able to think smart and on the fly, knowing which weapons are best to use which foes and when it's time to go for something essential like health or ammo.  The shooting in this game is like a mathematical equation.  Constants and variables are running around in your mind, and your bound to notice your heart rate increasing as each encounter gets more intense, deadlier, and fast-paced than the last one.

And if your heart rate and pressure take a noticeable increase, don't worry, it is perfectly fine.

People complained Doom's arsenal became insignificant once you got the super shotgun.  First of all, did you play it on Hurt Me Plenty?  If so, then you missed out on all the depth and strategy the shooting offered.  However, the sequel fixes this by making each and every gun serve a purpose, especially with the weapon attachments each one has.  Whether it's using the grenade launcher attachment on the shotgun to set up a Cacodemon for an immediate glory kill, or using the shield on the mini-gun to soak up damage from an attack by a heavy-hitter like the Tyrant while you in turn deal it damage, no gun will gather dust in the weapon wheel.

It also helps there is a slew of upgrades to unlock for your character, his arsenal and more.  There are Praetor suit tokens, which can be used to purchase perks for one of five categories, combat tokens to unlock upgrades for your attachments, or runes which provide character boosts to the Doom Slayer.  It is a lot to take in, but it all clicks after a while.

Level design is excellent, and I was surprised to see how fun the platforming was.  The Doom Slayer is surprisingly agile.  Expect to leap from wall to wall like he's a ninja and make plenty of perilous jumps over bottomless pits.  These sections break up the combat nicely, as does the exploration.  There's a variety of secrets to find, including toys, songs from different games made by ID Software, and cheat codes.  Yes, a game released in 2020 contains cheat codes for players to find.  I think I'm gonna cry.  Even better, it's possible to find and unlock fully playable versions of Doom and Doom II in the Doom Slayer's headquarters, so it's like getting three games for the price of one (make it four if you pre-ordered and got Doom 64 as a free download).

Doom Eternal excels in the gameplay, but the story is something else.  How do I describe it?  It's like a space-faring version of Conan the Barbarian mixed with a religious-themed issue of Heavy Metal.  The game goes to great lengths to explore the Doom Slayer's backstory, and without saying much, let's just say the Doom Slayer is THE GUY.  The world building itself is astounding, and the story takes our favorite demon killer to places unbound.

There's not much else to say, other than Doom Eternal is probably the best game of 2020 thus far.  It seems like blind praise, sure, but in my mind, this game is first-person-shooting nirvana.  It makes you shed your skin as a gamer and emerge as a wholly new individual, one who is more than capable of making the impossible seem possible.  Things seem dire out there, but as Doom Eternal shows, it could be worse.  We could be invaded by the forces of hell, with our only hope lying in a man who's single purpose is to kill, kill, and kill the enemy, until all is done. 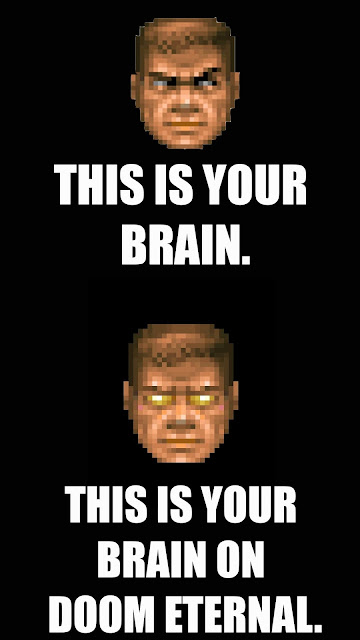 Posted by William Lowery at 7:41 PM No comments: