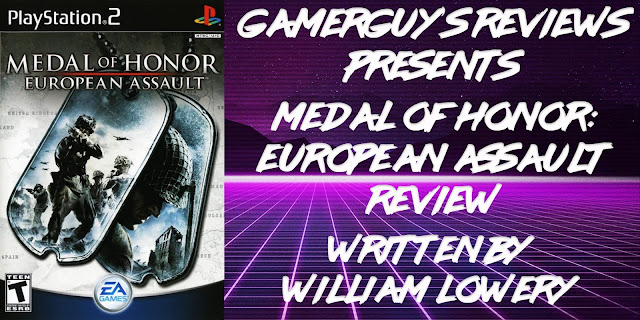 Medal of Honor kickstarted a trend where the first-person genre became inundated with titles centered around World War II.  Some were good, some were bad.  Over the span of eight years, twelve Medal of Honor games would be released, sometimes within the span of a few months of one another.  The iterative approach the series took on resulted in an uneven balance of quality with each passing installment.  After 2007's Medal of Honor: Airborne, the series went on hiatus and came back in 2010 with a reboot which aimed to ape the success Call of Duty had with its Modern Warfare titles.  It didn't work, but back in 2005, as the series was still in high gear, gamers were treated to another bout of World War II action with Medal of Honor: European Assault.

European Assault follows Lieutenant William Holt and his series of adventures across the European theatre of World War II.  He travels from St. Nazaire to North Africa to the Soviet Union and to Belgium, taking part in various operations intended to halt whatever it is the Nazis are scheming.  In the final stretch of the game, Holt must track down and eliminate General von Schrader, who is building a dirty bomb to house a virus that will severely impede the Allies' progress, should he be allowed to finish it.

As one can tell, the game's plot isn't in-depth, and serves only as a vehicle to funnel the main protagonist from one location to the next.  Even the hero himself is as generic as they come, although it is cool how in one of the later missions, you get to rescue Manon Batiste from Medal of Honor: Underground, and after you do, the two of them have to hold off a retaliatory attack by the Germans from inside a barn.  Despite this, the story is serviceable but ultimately forgettable.

Like the story, the gameplay is by-the-numbers, but it does introduce some new concepts to shake things up.  Each missions has a series of objectives for Holt to complete, such as sabotaging equipment, rescuing soldiers, or obtaining intel.  What sets this game apart from previous entries is the sandbox-like nature of the levels.  You're free to accomplish the objectives in whatever order you please, and taking the time to explore each locale will unearth new secondary objectives.  The more objectives you complete, the higher the ranking you'll receive at the end of the stage.  It's a nice change of pace and rewards players for going out of the way to see what might be hiding.

Holt is not doing things on his own, as he's always accompanied by one or two allies.  These soldiers have health so if they die, they're gone for good, and how many are still alive by the end of a level determines how many med-kits you'll be rewarded with.  On that note, med-kits can be found scattered across the environment and used to heal yourself or your comrades.  By pressing a button, Holt can order troops to take cover at whatever spot he indicates.  Although this seems to imply the game is more strategic a'la Brothers in Arms, it's a barebones feature, and you're more than capable of taking on the Nazis by yourself.  It's a shame because it could have made the combat more interesting had this idea been fleshed out more.

When it comes to combat, it's serviceable.  If you've played any other World War II shooter from the mid-2000's, then the selection of firearms will be incredibly familiar.  From the Thompson to the M1 Garand to the MP40, all of the guns are standard fare for this type of shooter.  What is unique for this game is the rage meter.  Killing enemies fills up the meter, and when full, it can be activated, which slows down time, makes Holt invincible, and gives him infinite ammo for his currently equipped gun.  As ridiculous as it is, it's a lot of fun to use, and in later stages will be a life-saver due to how much the difficulty ramps up.

Medal of Honor: European Assault is not a bad game, just one that's incredibly conventional.  It's fun, it's functional, but after you beat it, there's not much of a point to replay the older missions.  The sandbox levels and rage meter give the gameplay much needed variety, but otherwise, it's the same old Nazi hunt.  However, get ready to die a lot due to the surprisingly difficult nature of the game.  Later levels pit you up against Nazis with weapons which will rip you to shreds in an instant.  Instead of checkpoints, the game uses a life system, and more lives can be earned by completing secondary tasks, but on higher difficulties, there are no lives to earn so if you die, you start from the beginning.  The final act is a tour-de-force of repeated dying, and I'm not afraid to admit this, but I resorted to cheat codes to get through the tough parts.

On the PlayStation 2, the game looks rough.  The selection of locales is varied, but the washed-out graphics and basic character models are distracting.  Plus, the framerate dips whenever there's too much going on, so if you do plan on picking up this game, get the Xbox version, as it has the smoothest performance of three.  Sound is uneven.  The voice acting is passable, but the voice actor for young William Holt gives his performance all the enthusiasm of someone just waking up.  Luckily, the weapons sound impactful and the music is grand and orchestral.

Medal of Honor: European Assault is a fun-enough time, but with a bit more refinement, it could have been a much better game.  Elements such as the open-ended levels are a great concept, but other ideas, namely, the squad mechanics, leave a lot to be desired.  For what it's worth, the game is decent and offers plenty of Nazi-killing action, but it's been done better in other games, Medal of Honor or otherwise.  Oh, and get ready to knock on death's door quite a few times in the second half of the campaign.