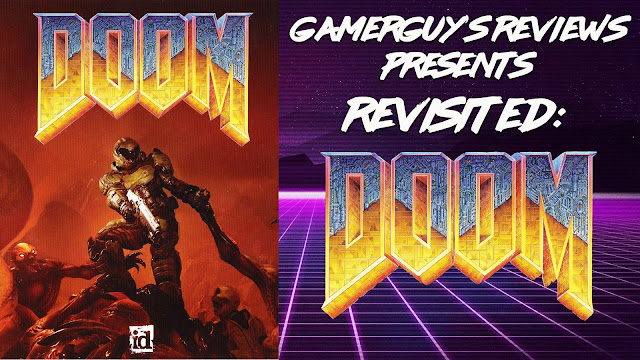 For those who don't know, I began writing back in 2014.  In that time, I cranked out a handful of reviews which I subsequently published on to GameFaqs.  They aren't the finest examples of my work and whenever I do look them up to see what 17-year-old me had to say on stuff like Saints Row IV, I cringe, namely because I thought this was quality work.  It's a good thing I didn't decided to quit then and there because since then, my writing has taken me places I least expected.  It's an experience that's had its ups and downs, but I'm glad I have kept at it.  Two years after I wrote those reviews, I did a recurring series on my website called "Revisited," in which I took a second look at various titles I had initially covered and offered updated opinions on them.

History repeats itself as I am revisiting the series to provide expanded thoughts on various games and movies I reviewed in 2017.  2017 was a rough year, and the personal struggles I faced had a negative effect on not just the output of my content, but the quality of my writing.  Every few months, you can expect a "Revisited" article.  Although I am dwelling on the past, I realize it's best to look forward, so don't expect this site to become clogged with "Revisited" articles.  With the introduction out of the way, let's start "Revisited" off with a second look at 2016's Doom.

Set on Mars, the game follows a man known only as the Doom Slayer.  He wakes up to see that he's about to be entombed into a crypt by the demons of Hell, and after breaking loose and dispatching his demonic assailants, he regains his suit of armor, grabs a shotgun, and sets about trying to stop the forces of evil from overtaking Mars.  His killing spree attracts the attention of Samuel Hayden, leader of the UAC corporation.  Hayden tells the Slayer that one of his colleagues, Olivia Pearce, has gone mad and opened a portal to Hell, and is now attempting to find a way to control the demonic hordes for herself.  Hayden wants Pearce to be stopped at all costs, but he also doesn't want to lose the research that's been put into exploring the potential of Argent energy, which is found only in Hell.

Although the story seems elaborate, in actuality, the plot is kept to a minimum, and ironically, the minimalistic storytelling is one of the game's biggest strengths.  By keeping the narrative in the background, the game never loses focus of what it's trying to do, and the plot resurfaces at the right times so as to remind the player what the status of the situation is.  He may not say a word, but we always know based on his actions whaat the Doom Slayer is thinking about at any given time.  He's a brute, the embodiment of badassery, but he's also a man with goals to accomplish.  There's an abundance of lore to uncover which provides a lot of context to the situations and characters involved.  All of it is optional, of course, but it's worth checking out the codex every once in a while, to see what you can piece together about the game's universe.

Forget two-weapon limits, forget regenerating health, forget aiming down the sights, and forget linear, cramped levels which funnel you from one objective to the next.  Doom is a throwback to the shooters of yesteryear, but in all the right ways.  Like the recent Wolfenstein titles, it successfully merges old-school with new school, but in the case of Doom it leans a bit more towards the former than the latter.  First, there's the control, which is tight and responsive, even on the PlayStation 4.  The Doom Slayer moves briskly and efficiently, which ensures you're always alert and on the ready.  It also makes the occasional platforming easy to do, and prepare to do a lot of double-jumping as you'll be hopping over enemies to dodge their attacks and climbing up ledges in search of secrets.

There are five difficulty options, two of which are unlocked after beating the game, and if you want to experience Doom proper, play it on Ultra Violence.  There's nothing with playing it on "Hurt Me Plenty" or lower, but you miss out on a lot of the depth and strategy the combat offers by playing on such difficulties.  It's a game that rewards you for playing fast and aggressive.  Staying in one place is not an option as the demons will find and kill you within an instant; fortunately, the Doom Slayer has guns, lots of guns, he can use to put Hell in its place.  He starts off with a meager pistol, but isn't before long that he gets a shotgun, and as the campaign progresses, he'll obtain the heavy assault rifle, plasma rifle, chain-gun, super shotgun, rocket launcher, and the BFG-9000.

There's also a chainsaw to use, and whenever an enemy is killed with it, pools of ammo are dropped.  The stronger the foe, though, the more fuel it takes.  Both this weapon and the BFG have limited supplies of munitions, but you can increase ammo capacity for all firearms by finding Argent cells, which can also increase overall health and armor.  Hidden in each level is a drone which can be used to unlock an alternate fire option for one of the guns.  This could be a grenade launcher attachment for the shotgun, mini-missiles for the assault rifle, or the ability to turn the chain-gun into a stationary turret.  By acquiring combat tokens, you can improve a weapon or equipment's effectiveness.  Equipment refers to things like grenades, a hologram to distract bad guys, or a special grenade which drains health from enemies to in turn give to the player.

Though he's well equipped for the dangers ahead, Hell has its share of formidable foes.  The slow and shuffling possessed are cannon fodder, but the projectile-throwing Imps, charging Hell Knights, leaping Reavers, and gargantuan Barons of Hell will test your reflexes and trigger finger.  The levels gradually ramp up the difficulty, and by the halfway point, the gloves come off.  The action is relentless and the focus on taking on large hordes of enemies calls to mind Serious Sam.  Whereas Serious Sam is about throwing out relentless waves of baddies, Doom knows when to slow things down and let the player spend time investigating their surroundings to look for supplies and secrets.  Plus, enemies have different strategies one can use to take them down, and re-using the same gun over and over will get you nowhere.

When a demon is weakened, they go into a dazed stupor and glow orange, indicating they can be finished off with a glory kill.  Glory kills are brutal yet satisfying, plus they make enemies drop health.  This finishing system never slows the action down; if anything, it provides the right amount of time for people the needed split second or so to evaluate what's going on and keep on pushing.  Doing well in combat and completing in-game challenges rewards the Doom Slayer with combat tokens, and the challenges involve killing a certain number of foes, finishing them off in a particular manner, or finding secrets.  Each level is filled with all sorts hidden goods, from health and armor caches to character upgrades to weapons to hidden levels ripped straight from the Doom and its sequel.

Joyful is the best way to summarize this game.  As gratuitously violent as it is, the combat never grows tiresome and consistently remains exciting and engaging.  It's a meaty campaign, so meaty is it you'll forget there are also arcade, multiplayer, and create-a-map features also available.  The campaign is so satisfying and the combat so anarchic that there's nothing wrong with going through the story mode over...and over...AND OVER, because there's always something new to experience or try out with each go-around.  The gameplay encourages you to play smart but aggressive against the opposition, and when you do successfully clear a room of monsters, it's immensely gratifying.


Never has a game filled with demonic imagery looked so gorgeous.  Doom runs smoothly, looks great, and is bolstered by a stellar art direction.  The clean, glossy look of the UAC facilities contrasts well with the dusty landscapes of Mars and heavy-metal inspired look of Hell.  Ripping demons in half is a visceral delight, and the guns look and sound the part.  Speaking of sound, it's excellent.  The minimal voice acting is good, but the music is what personifies the experience.  It's raw, fast-paced, and powerful, and it ramps up accordingly with the action and serves as firm reminder of what the player is up against.

When I wrote my initial review of Doom, I was hesitant about praising the game too much and gave the initial verdict of "9/10" just to seem professional, to which I say, to hell with the rating, Doom is f*cking awesome.  Its problems like the occasional clipping issue or physics glitch, are minimal in the grand scheme of things, because the gameplay is so well-designed and fine-tuned you'd feel guilty for offering any sort of criticism.  The story is kept to the bare minimum, but the world and lore it establishes are fascinating and evoke the feeling of "Total Recall Meets Aliens Meets Iron Maiden."  Combat is a non-stop, fast-paced, blood-soaked symphony of destruction, and just when you think you've seen everything the game has to offer, it throws in something unexpected to shake things up, like a boss fight.

When someone asks me, "What's your favorite game of all time?"  I can't give them a straight answer because I have so many favorites, it's hard to decided which one is which; however, if someone asked, "What's your favorite shooter?" I would tell them Doom.  In replaying the game, I was taken aback how fun the experience was, and I can only hope the upcoming Doom Eternal is as good as if not better than Doom.