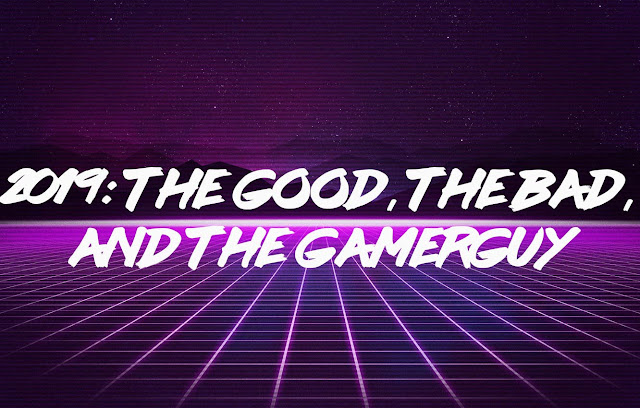 2019 is coming to an end.  As everyone gets ready for the next year, I am once again reflecting back on this year and how things went.  It was a year, to say the least.  When 2019 began, I had intended it to be my most ambitious year yet.  I've been writing for four years, and I wanted this to be the year where I branched out and tried new stuff, while still focusing on and honing the craft I was best at.  Did I succeed?  Sort of.  2019 was like a rollercoaster ride, one filled with ups, downs, and loops to charter me off into unexpected directions.

The first half of the year was dominated by various personal dilemmas, many of which strangely happened in March.  First, college.  There's the myth that everyone graduates from college in four years, but that's not the case for many people.  Initially, I was told I'd be graduating this December, but towards the end of May, I learned it wouldn't be until next year due to certain requirements not being fulfilled.  While folks would graduate and get on with their lives, I would still be there, finishing the job.  I faced some other challenges besides a delay in college graduation.  The dojo where I had studied karate at for 11 years closed, and I went through my first break-up.  Again, March was hell.

I found myself stuck in a state of doubt, unsure of what I would do next.  When the semester ended, I took this as the time to gather my thoughts, form a game plan, and improve my well-being.  It was also during the summer that I did things that for me, were risky.  First, I left my part-time job at Little Caesars in July after working there for four years.  How I lasted so long there remains a mystery, given my raucous behavior, yet the main reason I departed after such a long time there was because I felt I had run my course.  I met a lot of great people there, all from different backgrounds and walks of life, and though the work could be strenuous, I also had a lot of fun.  Working at Little Caesars opened me up as an individual, plus I learned new skills I could apply to my daily life, namely cooking.

In addition to leaving my first job, I took my first out of state trip by myself.  At the beginning of 2019, one of my accomplishments I hoped to pull off was to travel out of state, and this idea came to me after the podcast Revival House announced they would be appearing at the Crypticon Horror Convention in Kansas City, Missouri.  I saw this announcement not only as a chance to meet a channel whose work inspired me to start my own podcasting, but I could experience of visiting a new place on my own.  It took months of planning and saving up money, but the payoff was worth it.  On July 11, 2019, I departed Hattiesburg for Kansas City.

The drive was long and since I was doing this by myself, I had no one to talk with to alleviate the silence.  On the way there, I detoured into St. Louis to meet Kenton Hilke, creator of the YouTube channel DarkLordJadow1.  It was great to meet him and discuss how he got his channel started and how his work influenced my writing.  I'll discuss more about it later in this post, but we do have a potential collaboration in the works.

After several hours of driving and stopping at gas stations to catch my breath, I made it to Kansas City and crashed on my hotel bed, exhausted but more than ready for the start of Crypticon the following day.  For the next three days, I wandered around the arena, gawking at the cool merchandise, people dressed up as horror characters, and the guests they had there.  I met my share of noteworthy individuals like Keith David, Bill Moseley, Joe Bob Briggs, and Tom Savini.  I also met the people behind Revival House, and in a fun turn of events, I found myself being the unofficial fourth wheel of the group as I spent my fair share of time helping them out, and we even "recorded" a commentary while we were out there.  I put the word in quotation marks as we had to stop about halfway through the movie due to the amount of noise from the convention overwhelming us.

Crypticon was fun not just because of the thrill of being at an out-of-state convention, but also because I learned a lot about how I could develop and expand my content so as to garner more attention to what I do.  The big takeaway was next time I go to a convention, regardless if it's in state or elsewhere, to bring business cards.  Business cards are the easiest way to encourage people to check out your content and in turn, attract new viewers/readers.

When I returned from the event, I felt rejuvenated and ready to take on the second half of 2019, and luckily, it was a tremendous improvement.  Sure, I had to write 10 to 15 page papers for some of the classes I was taking (which is not fun at all), but I also found a new job in the form of my college's newspaper The Student Printz.  I had written for them briefly in late 2018 and into the early part of the year, but I left due to the anxiety I was developing from the problems I was facing.  Regardless, it's been great fun working for the newspaper, and it's bettered my skills at both writing and photography.  I understand this article is more focused on what's happened in my personal life, but the information is relevant because it reflects my general mood throughout the year and what all I published on the website.

Speaking of which, what's the current state of GamerGuy's Reviews?  Well, growth has been steady.  As of this writing, the site has over 8,300 views, which is impressive as far as I'm concerned.  The new podcast I started currently has 41 subscribers, which might seem small to some, but I'm proud of the progress the podcast has made.  In retrospect, I did keep to my ambitious ideas I had planned, more in the sense of how I overhauled a lot of technical stuff regarding the website, although I did also write about my share of current stuff.  I wrote reviews for Godzilla: King of the Monsters, Crash Team Racing Nitro-Fueled, and Wolfenstein Youngblood, and this isn't accounting for all the newly released titles I reviewed for The Student Printz.

Will this trend continue into 2020?  Definitely.  From now on, I will notify readers of any reviews I write for the Student Printz, and with all the big releases slated for March/April 2020, expect articles on Doom Eternal and the Resident Evil 3 remake, among others.  I'm still writing for Cubed3, but going forward, I've decided to cover a game for them every 4 months.  Then, there's VHS Revival.  For those unaware, I was put on shore leave by the site's editor in chief.  I haven't been kicked off the site, but he felt my writing wasn't quite up to par with what he wanted, which is understandable.  I can't say when I'll write another article on their site, but when it happens, I'll let y'all know.

I have a lot of reviews planned for next year, and from now on, reviews will be published on Fridays, while podcasts go up on Wednesdays.  I know I've struggled to keep to the promise of writing up and publishing all scheduled reviews, but in 2020, I'm committing to the roster I have planned.  2020 marks my final year in college, not to mention the five-year anniversary of GamerGuy's Reviews.  It's crazy to think I've been writing this long, and though there have been ups and downs, I've never given up, and I want to keep pushing myself and hone what it is I do best.

Now, let's talk podcasting.  In March (definitely the perfect time to try and start a podcast), I started a podcast focused on film commentaries.  At the time, I didn't know what to call the podcast, and it didn't help that they were solo efforts.  Tip for people who attempt to start their own podcast: get a co-host.  Since the first few episodes were just me and me only, it was a challenge.  You'll notice quite a few quiet spots as I tried to figure out what to say next about the movie I was providing commentary for.  In August, I met up with my best friend Matt and while we were hanging out, I asked him if he'd be interesting in becoming a co-host, to which he said yes.  The podcast, now called Will and Matt's Excellent Podcast, has improved tremendously.

Starting a podcast allowed me to do my first collaboration as I partnered up with Richard Jackson of Val Verde Broadcasting to do a commentary on Return of the Living Dead Part II.  I'm a fan of Richard's work and since we were both fans of the Return of the Living Dead movies (well, the first one, at least), I decided to reach out to him and ask if he wanted to do a guest commentary with me.  Collaborations will be a big part of GamerGuy's Reviews next year.  Right now, I have three potential crossovers in the works.  I can't say much on them now, but next year, you can expect collaborations with DarkLordJadow1, Cinematic Venom, and GeekGamer7.  Expect plenty of interviews as well.  The two interviews I did this year were fun to do, especially the one with Thom Mathews.  It was the first time I interviewed an actor, and it was a great experience.  Maybe I'll get lucky and in 2020 I get to interview Bruce Campbell (doubtful, but you never know).

This concludes my year-in-review of 2019.  The first half may have had its hurdles, but I overcame them and came out with a solid second half of the year.  Instead of two uneven halves, though, I want the entirety of 2020 to be a fun, memorable experience.  I'm graduating in May and then, it's out into the uncharted territory known as the real world, and I have a lot of big plans I want to accomplish in my life after college, but like I said earlier, the only person who can pull off such goals is myself.

Before I forget, here are links to my three latest commentaries.