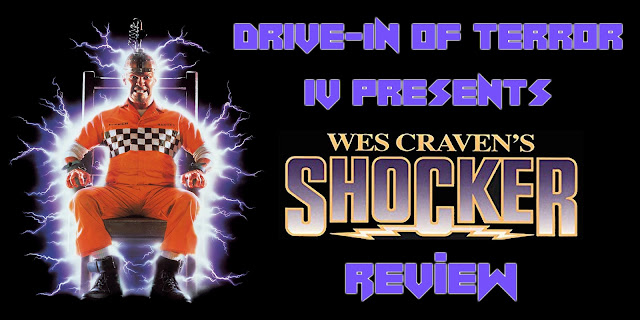 Wes Craven is one of horror's celebrated directors.  To mainstream audiences, he's the man who created Freddy Krueger and Ghostface, to horror gurus, he's the man behind films such as The Hills Have Eyes and The Last House of the Left.  Some of his films fare better than others, but at least one can agree his filmography is diverse.  In the late 80's, Freddy Krueger had become a household name, but Craven was dissatisfied with what New Line Cinema had done to the Elm Street killer.  No longer was he the man who terrorized people in their dreams; now, he was a practical joker who relished in toying with his victims and putting them through elaborate and fantastical dream sequences.  In an effort to one-up his own creation, Craven released Shocker, a movie about a killer with the power to harness electricity.

Jonathan Parker (Peter Berg) is an average teen who finds himself caught up in a manhunt for Horace Pinker (Mitch Pileggi), a serial killer who masquerades as a TV repairman.  After Pinker kills his mom and siblings, followed by his girlfriend (Cami Cooper), Jonathan wants the man stopped before he gets to anyone else.  Through premonitions he has, the police are able to find and arrest Pinker, and he's immediately sentenced to death by the electric chair.  Little do they know that the man specializes in black magic, and after he's fried, Pinker's ghost begins possessing people and manipulating electricity in an effort to kill Jonathan Parker, who's really his son.

Shocker is heavily derived from Wes Craven's A Nightmare on Elm Street.  Instead of a killer who gets you in your dreams, it's a guy who can possess people and pop out of televisions to get the drop on his victims.  Ironically, dreams are how Parker is able to know when Horace Pinker will strike next.  It's a tad unoriginal, but Shocker is fun and exhibits personality through its late 80's heavy metal soundtrack and inventive kills.  The film is like three different movies rolled into one.  The first act is a straight-and-serious crime thriller, the second act is a possession flick, and then the finale is an over-the-top spectacle as Jonathan and Horace chase each other through different television channels and programs like Frankenstein, Leave it to Beaver, an Alice Cooper concert, and a televangelist show.

At the center of this madness is Jonathan Parker.  He shares some similarities with Nancy from Elm Street, such as doubtful parents and a personal connection to the killer.  The difference is that Horace is his biological father, whereas in Elm Street, Nancy's parents were involved in the burning of Freddy Krueger.  In the first act, he's able to determine where the killer will strike next via dreams he has, but this power is never explained and doesn't come into play at any other point in the picture.  Indeed, one of Shocker's biggest issues is its inconsistent logic.  Characters learn of new powers conveniently when the story demands it.  For example, when Horace Pinker is cornered by Alice's ghost, he only then realizes he can jump into electrical sockets for a quick getaway.

Speaking of which, Alice, Jonathan's girlfriend, comes back as a ghost who shows up at the right time to save him.  Why she's able to come back from the afterlife is another thing left unexplained.  As stated before, the movie copies a lot from A Nightmare on Elm Street, the only thing it didn't copy was clear rules behind the killer's powers.  It's a shame Horace's ability to manipulate electricity doesn't come into play until the finale.  With a movie called Shocker, one would expect to see scenes where Horace's ghost possesses technology like cars to kill people; instead, he does most of his murdering by taking control of cops, mothers, construction workers, and Jonathan's friends and family.

His powers might be all over the place, but Horace Pinker is a badass.  Whereas Freddy Krueger used his wit to intimidate his victims, Horace Pinker goes straight for brute force.  Mitch Pileggi is awesome as the killer.  At times, his acting can be a bit hammy, but it only adds to the charm, and like the Springwood Slasher, he has a variety of catchy one-liners at his dispose.  Like the heavy metal soundtrack, he's large and loud.  Speaking of the soundtrack, it reads like a heavy metal fan's wishlist.  The songs include tracks by The Dudes of Wrath, Megadeth, Dangerous Toys, and Iggy Pop, among others.  It's a film made for the Headbangers Ball generation, and the crazy anarchy is best summarized via Megadeth's cover of "No More Mr. Nice Guy."

Shocker might not reach the same heights of A Nightmare on Elm Street or The Hills Have Eyes, but it's an entertaining if flawed experience.  At times, it's a bit too formulaic and only in the final act does the film deliver on its namesake, with a majority of the movie playing out like a supernatural version of The Hidden.  Plus, the rules behind the killer's and protagonist's powers are never clearly explained, and feel like they were thought up on a whim.  Additionally, while the metal songs rule, the composed music is a bit too melodramatic, especially with its over-reliance of having a loud piano crash anytime a scare happens.

It's uneven, yes, but it exhibits style.  The villain rules, and the scenes of him terrorizing Jonathan Parker are delightful.  It's clear Shocker was meant to be the next big thing in the world of horror, but things didn't pan out as intended, which is a shame.  A sequel that upped the ante and expanded upon Horace's powers would have been amazing.  Who knows?  In the age of smart phones and computers, a modern-day retelling of this movie offers a lot of potential.  This is merely speculative, and at the end of the day, Shocker delivers on the thrills, despite its flaws.