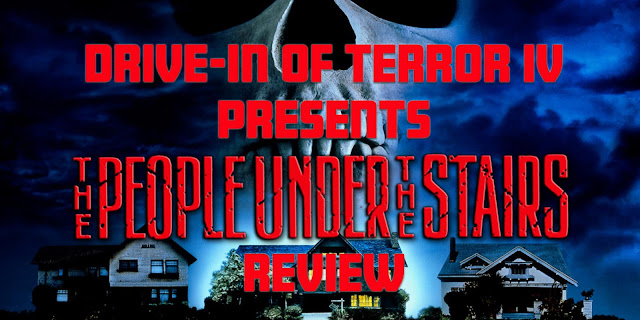 In the world of entertainment, it can be hard to escape typecasting.  When an actor or director becomes famous for a particular line of work, it's hard to associate them with anything else other than that.  With directors, they tend to be type casted towards a genre, often horror or science fiction, but every once in a while, they break the mold and create something unexpected.  For Steven Spielberg, it was Schindler's List, for John Carpenter, it's Starman, and for Wes Craven, it's The People Under the Stairs.  Although rated R, the film is more akin to a modern retelling of a fairytale, with shocks and humor thrown in for good measure.

A kid nicknamed Fool (Brandon Adams) is convinced by a thug (Ving Rhames) to join him and his buddy on a heist attempt.  The target is a home in the suburbs owned by an enigmatic man (Everrett McGill) and woman (Wendy Robie) who have a firm grip on many of the houses and neighborhoods in the city.  According to a treasure map found by Leroy, there's a treasure trove of money tucked away inside the house, and they're going to find it.  The next day, the three put the plan into motion, but they have underestimated the houseowners.  There are booby traps, electrified doors, and a ticked off dog all in place to keep intruders out.  Leroy's friend is killed not long after he makes his way in, and then Leroy and Fool get locked inside and must escape, hopefully finding the loot in the process.

The People Under the Stairs is an interesting spin on many of the established tropes one associates with children's fairytales.  Fool is the poor pauper looking for a way to help his family, and the house he gets convinced to help rob is the castle filled with riches but also danger.  It's an R-rated version of The Goonies and Home Alone, with a deranged "couple" standing in as the crooks the kid must outwit.  There's a lot of gags and jokes, such as a bit where Fool grabs on to an electrified door handle to channel electricity to Leroy, who's struggling to get a guard dog off him.  The film is surprisingly funny, but it has its bits of brutal violence and scares to remind the viewer this isn't a family-friendly experience.  Trying to survive the house of terrors is Fool, an inner-city kid caught up in an extraordinary situation.


Fool is the audience's viewpoint into the insanity that is the house.  Usually, the kids are the ones with traps and other gadgets to thwart the attackers, but in this movie, the adults get to play with the toys.  The man and woman are a manipulative pair, using switches to change the layout of the house and voice communicators to keep in touch with one another while hunting Fool and Leroy.  They're also keeping something secret in the basement besides money.  What is this secret?  Various boys they've captured in an effort to find the perfect son, and when they misbehave, they're locked away and lose either their eyes, tongues, or ears as part of the punishment.

Notice how this review doesn't mention the names of the man and woman.  Never once do we learn their real identities, it's kept a mystery, but it's clear the couple is not only deranged but also overtly religious, especially the woman.  Fool meets a girl, Alice, who, like the ones in the basement was kidnapped at a young age and brainwashed into being their daughter.  Keeping with the fairy tale allusions, Alice is the princess locked away in the castle that Fool attempts to free from her captors.  When she falls out of line, she's severely punished and forced to do things like scrub a bloody floor or clean herself up in steaming, hot water.

This is where the horror aspect of People Under the Stairs comes in.  The horror isn't the skinny, albino-looking boys trapped in the basement, but it's the matter of people being abusive toward children.  Wes Craven is clearly commenting on the topic of children who are raised in strict households, and the abusive parents who watch over them.  In an essence, the man and woman are the monsters, not the ones in the cellar.  Did I forget to mention they're really brother and sister?


Weirdly, an important player in the plot is the house.  As discussed, the house is layered with traps and other devices, but it's also got hidden routes behind the walls which the characters make use of to escape the man and woman.  It reminds me of Resident Evil 7 as in that game, the protagonist makes use of secret passageways to evade his pursuers and reach a safe spot.  Guiding fool is Roach (Sean Whalen), one of the kidnapped boys who's managed to escape the basement and use the passages to move around the place without getting caught.  The hidden traps and mangly-looking boys call to mind The Hills Have Eyes, but with more shotgun-wielding gimps.

The People Under the Stairs is one of Wes Craven's hidden gems, right along with The Serpent and the Rainbow.  There are no serial killers or vampires in Brooklyn; instead, it's a boy trying to save his family from eviction by taking a trip into a madhouse.  The movie is an urban version of the classic fairy tale, and like those stories, everyone lives happily ever after, albeit with a few casualties.  It's fun and very humorous, but also gives us a glimpse into monsters that don't kill you in your dreams, but are rather people like us.