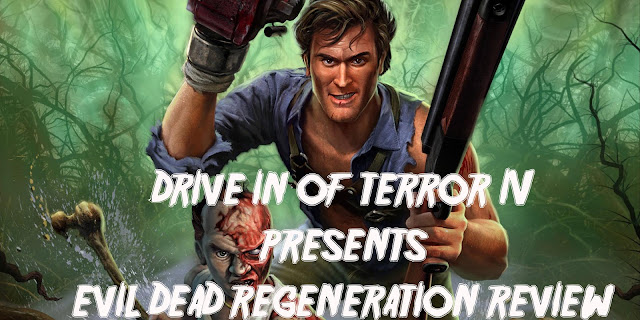 Trilogies come in two flavors, either they start out good and end bad, or they are consistently solid.  A trilogy being the latter is rare, but what's even rarer is a trilogy where the first installment is bad, and the quality improves with each installment, such is the case with the Evil Dead games.  The first title, Hail to the King, is an appalling cash-grab and a waste of Bruce Campbell, while the sequel, A Fistful of Boomstick, is an enjoyable beat-em-up experience.  Rounding out the trilogy is Evil Dead: Regeneration, a game that is not a sequel to the previous title but a "What If?" scenario.  In this case, what if Ash wasn't sent back to the Middle Ages and instead arrested and committed?

Having hacked up his friends at Knowby's cabin, Ash is declared insane and sent to the Sunny Meadows Asylum.  The institution is run by Dr. Reinhardt, who has gotten his hands on the Necronomicon, unbeknownst to Ash.  Reinhardt reads the incantations and unleashes the evil forces on the asylum.  With all hell breaking loose, Ash finds his gear and suits up, but he's not alone.  Joining him is Sam, a half-man/half-Deadite Reinhardt experimented on.  They need to act quick as Reinhardt teams up with the Dark Ones and orders them to track down Ash's lawyer Sally, who has Professor Knowby's diary, which is needed to stop the evil from spreading.

Evil Dead: Regeneration's story is interesting.  Instead of acting as a sequel, it's an alternate timeline, one where the expected events play out, but not in the way fans expect.  After the opening levels, though, the story turns into a meandering adventure, one where subplots are introduced but never paid off.  In an unfortunate twist of fate, the game ends on a cliffhanger.  Why is it all Evil Dead products, be it movies, television shows, or video games, have to end on a cliffhanger?  No sequel ever followed Regeneration as the developer, Cranky Pants Games, renamed themselves Sandblast and made Destroy All Humans: Path of the Furon, and we know how that turned out for them.

Although the plot leaves much to be desired, it's made up by the writing and humor.  You can tell Cranky Pants Games were huge fans of the movies, as the cut-scenes and dialogue exhibit all the hallmarks of Sam Raimi's films, even going so far as to recreate much of the trademark camera work the director is known for.  Ash's cocky antics are balanced out by Sam's hijinks.  Since he's part-Deadite, Sam can't die, which leads to a lot of great scenes where he's put through all sorts of extreme punishment.  The banter between the two is hilarious, and it helps that Sam is voiced by Ted Raimi, younger brother to Sam Raimi.

Like the last game, Regeneration is an action-adventure experience, but the combat has been drastically overhauled.  Instead of a 3D beat-em-up, it's now a hack and slash in the vein of Devil May Cry, or in this case, Evil Dead May Cry.  Ash's movement is flexible and smooth.  He can lock onto enemies with ease and perform a selection of stylish combos with his weapons.  He starts with just a pistol and the nub of his arm but it isn't before long that he reacquires his chainsaw and shotgun.  Later, he gets an explosive launcher and is able to equip a harpoon gun and flamethrower to his right arm.  None of the weapons can be upgraded, but all guns now have infinite ammo.

During gameplay, when an enemy is weak enough, they start to glow green, meaning Ash can pull off a finisher to dispatch them.  Some enemies can block all of his attacks, which is where Sam comes into play.  With the press of a button, Ash can kick Sam onto the nearest foe, which either results in an instant kill or distracts them long enough for Ash to finish the baddie off.  The game encourages the player to abuse Sam as much as they want, given how he can't die.  Every once in a while, Ash will possess Sam via a special portal so Ash can reach an inaccessible part of the map.  Escort sections pop up where Ash must protect his partner as he takes a soul back to a gatekeeper, which always happens at the end of a stage.

When things get tough, Ash can trigger his rage mode and turn into a hulked-out version of himself.  While in rage mode, all attacks deal double damage.  Despite having a variety of weapons and combos, Evil Dead: Regeneration is an easy experience.  Although the fluidity of combat is excellent, the evil forces don't put up much of a fight.  The lack of different difficulties means the five-to-six-hour experience is a cakewalk.  The lack of upgrades or new moves to unlock is disappointing, given how A Fistful of Boomstick let the player equip different ammo types and whatnot to the firearms.

Like the previous games, the boss fights are simplistic.  All of the bosses have easily identifiable attack patterns, which makes the scuffles quick and painless.  The only challenging one is the final boss, but even that's not saying much.  There's not much incentive to go back and replay the game once the adventure is over either.  The only reason you might revisit this title is if you missed any of the collectable Necronomicon pages that unlock extras like behind-the-scenes videos and concept art.

Evil Dead: Regneration looks good.  Some of the the environments look bland and ugly, most notably the swamp stage, but others like the levels set in the world of the Dark Ones look great.  Cranky Pants Games did aa remarkable job capturing the look and feel of the films, and it's easily the most authentic-feeling Evil Dead game of the three.  Sound is excellent.  Bruce Campbell is once again back as Ash, and the dialogue between him and Sam is hilarious.

Is Evil Dead: Regeneration the best Evil Dead game?  Yes.  Is it a good game in its own right?  Yes and no.  The premise is unique and the switch to hack-and-slash combat works well, and the incorporation of Sam leads to some interesting and funny gameplay sections.  On the other hand, it ends on an abrupt note and the lack of upgrades or optional difficulties means the game is a bit of cakewalk.  At least Evil Dead: A Fistful of Boomstick had a challenge mode to test your combat skills.

Still, you can tell the game was a labor of love, and had Cranky Pants Games been allowed to expand upon the ideas in a potential sequel, then it's possible we could have had the ultimate Evil Dead experience.  Alas, such talk is merely speculative, given the penultimate fate of the studio in the years following this game's release.  The Evil Dead games are an interesting batch of licensed titles, as it's the only time a trilogy goes from bad to decent.  They have their problems, but they're still worth a look, except for Hail to the King.