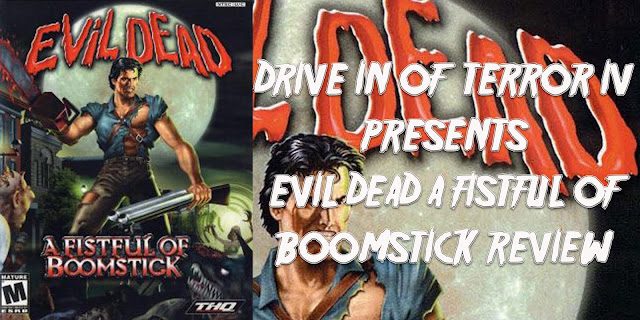 Evil Dead: Hail to the King is like being thrown into a pit with a Deadite.  Suffice to say, you're not going to survive.  Despite its mediocre reception, the game received a sequel in 2003 with Evil Dead: A Fistful of Boomstick.  Whereas the previous affair was developed by Heavy Iron Studios, this follow-up came from VIS Entertainment, who at the time were best known for developing 2001's State of Emergency.  In a surprise twist A Fistful of Boomstick isn't awful, probably because it jettisons the survival-horror angle of the first title in favor of an action-adventure experience reminiscent of the studio's previous game.

In between the events of Hail to the King and Fistful of Boomstick, Jenny, Ash's squeeze, died in a bus accident, leaving the badass to live life in an alcoholic stupor.  While drowning out his sorrows at the bar for the umpteenth time, a local television show hosted by Trisha Pettywood has acclaimed author Professor Eldridge on as a guest for tonight's program.  Trisha has gotten her hands on the Necronomicon and Knowby's tapes, which she decides to play live on the air.  This unleashes the evil forces yet again onto the streets of Dearborn.  Realizing all hell has broken loose, Ash dusts off his boom-stick and chainsaw once more to stop the evil dead.

One of the biggest problems of Hail to the King was its over-reliance on nods and references to the movies.  This sequel avoids this misstep and is a completely original adventure, which, while not perfect, is more fun than its predecessor.  The biggest strength of the narrative is its usage of time travel.  Instead of going back to the Middle Ages for the umpteenth time, Ash travels to different eras of Dearborn, Michigan, including the colonial and Civil War eras.  Utilizing this town as the principle setting means that while Ash travels through time, the layout of the place stays similar.

Even better, the game plays into the idea of cause and effect, meaning what Ash does in one time period results in some changes when he travels to a further point in time.  The supporting cast is forgettable and their actions predictable, and not helping matters is that like the last game, this one ends on a cliffhanger.  If you're hoping to see Ash fight possessed samurai and more in the follow-up, think again.

A Fistful of Boomstick ditches the clunky survival-horror gameplay and is an action-adventure beat-em-up.  Ash will travel from present-day Dearborn to the past and back, all the while completing objectives, solving puzzles to collect items, and slaughtering never-ending hordes of Deadites trying to kill him.  Controls and mobility are a step up from the tank movements of Hail to the King.  A lock-on system allows Ash to easily switch from target to target, and a cool touch is how he'll hoist his gun over his shoulder if someone approaches him from behind, just like in Army of Darkness.  Melee combat is a bit rigid, though, which means moving from enemy to enemy isn't as smooth as expected.

Enemy variety is also limited.  It's Deadites, Deadites, and more Deadites, and no matter where you go, they will follow.  It can be a bit annoying when you're trying to figure out where to go next, but it does keep the player on their toes.  While the roster of bad guys isn't much, the weapon selection is diverse.  Ash starts off with his shotgun and a shovel, but it isn't before long that he finds a chainsaw.  This is just the tip of the iceberg, as he'll also acquire new weapons such as a pistol, a sword, a flamethrower, and even a Gatling gun.  These firearms and others can be equipped to his left and right hand, and there are different ammo types to use with each gun, such as incendiary and explosive rounds.

Besides using an assortment of weapons, Ash can harness the power of the Necronomicon to use against the forces of evil.  Spells are found over the course of the game and require energy to use.  As a whole, the combat is an improvement over Hail to the King's unsatisfactory action.  Although Evil Dead: Regeneration has the smoothest combat of the games, this one has the most variety in terms of weapons and abilities.  Although the Deadite killing is fun, trying to figure out where to go next isn't.  The lack of a map can make navigating locales a bit confusing at times, especially the last level set in post-apocalyptic Dearborn.

Sadly, the game doesn't deliver on the boss fights, either.  They're simplistic and easy.  It's a short experience, only taking five hours to beat, but there is extra content in the form of a challenge mode, a making-of video, and art galleries that are unlocked after beating each level.  The challenge mode is surprisingly enjoyable since it tests your skills with the game's combat mechanics.  Aside from earning a rank after each round, though, there are no other rewards for beating each stage, but it is an amusing diversion.

Visually, the game looks fine.  The best part of the graphics is the high enemy count since at any point, Ash may be swarmed by as many as 20 enemies.  Chopping and shooting ghouls into bits is meaty and bloody, but the character models and locations look basic.  The worst-looking one is Ash, who's in-game model makes him look like he's constipated.  The poor lighting also makes it hard to tell what you might be running into.  Voice acting is greatly improved from the dull performances of before.  Bruce Campbells sounds interested in the material and his dialogue is amusing.

Good news, Evil Dead: A Fistful of Boomstick is worth playing.  The story is familiar territory, but the emphasis on time travel is interesting.  Instead of being cumbersome, the gameplay is frenetic and action-packed.  Slicing demons in half with a chainsaw or mowing them down with the Gatling gun feels great, and the diverse selection of weapons and spells keeps things varied.  What does drag the experience down is the confusing level design and dull boss fights.  Though it's not perfect, A Fistful of Boomstick is leagues better than its predecessor and is at least fun for what it is.