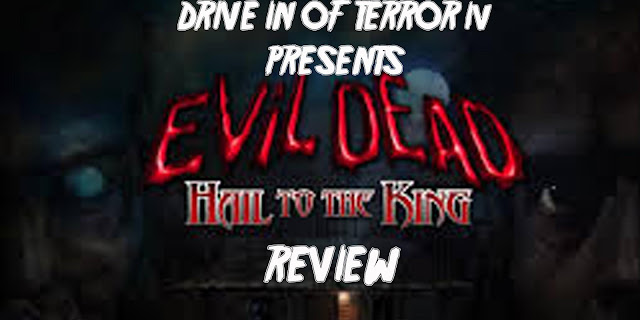 Evil Dead is perfect material for a video game.  Heck, the first movie is like a survival-horror experience, while the sequels amped up the action and fantasy.  Prior to Hail to the King, the only other game based on the cult hit was an adaptation of the original for the Commodore 64.  Evil Dead: Hail to the King marks the first in a trilogy of Evil Dead tie-in games published by THQ.  Before the remake and before Ash vs. Evil Dead, these games were the closest fans got to a continuation of the trilogy.  Plus, this title features the king of the chins himself, Bruce Campbell, reprising his most famous role of Ash Williams in video game form.  Sounds like a recipe for success, right?  Eh, not really.

Having managed to return back to the present, Ash has gotten his job back at S-Mart and has found new love in the form of his co-worker, Jenny.  Despite this, he's haunted by the events that unfolded at the cabin.  Jenny suggests they go back so he can face his fears, but when they arrive, the two notice the cabin is surprisingly intact.  Further investigating leads to Ash's severed hand popping up and sneakily turning on the tape recorder with Professor Knowby's translations of the Necronomicon.  The evil force is resurrected, and Jenny is kidnapped.  With a newly built chainsaw and boom-stick in tow, Ash sets out to save his girlfriend and put an end to the nightmares for good.

On paper, Hail to the King's set-up is fine, but the execution of the story makes the experience feel like fanfiction filled with too many unnecessary callbacks.  A lot of the nods are contrived, such as the fact that the cabin looks fine and it's not in shambles, or how the tape recorder is in pristine shape.  Over the course of this three-hour adventure, more pointless references rear their Deadite head, such as the film projector from The Evil Dead, a boss fight against Annie from Evil Dead II, and a detour into Damascus a'la Army of Darkness.  It's an unsatisfying adventure from beginning to end, capped off by an out-of-nowhere cliffhanger that is promptly ignored for the sequel.


Evil Dead: Hail to the King is a survival-horror affair in the vein of Resident Evil, right dow to the tank controls, fixed camera angles, and pre-rendered backgrounds.  As blatant as it is, a survival-horror Evil Dead experience sounds like a winning time, but it isn't.  On the contrary, the game is tedious and cheap.  The series is know for its over-the-top blood and gore but taking on Deadites and other creatures is about as fun as getting thrown into a tree by Evil Ash.

Instead of satisfying chainsaw action, melee fights between Ash and the demons are pitiful-looking slap-fights.  The combat is made extra annoying by the respawning enemies.  9 times out of 10, after a Deadite is defeated, another one spawns in its place.  As a result, you'll find yourself evading foes as much as possible since there's a strong likelihood you'll die trying to take them down.  Enemies do drop health, but it feels like a trade-off for all the health you lost just trying to kill a ghoul.  Using the chainsaw is slightly satisfying, but since it runs on gas, it's better to just run away.  Also, collision detection can be incredibly wonky, as sometimes Ash's attacks will miss, despite you being in their range, or Deadites will hurt Ash even though he's at a safe distance.

On the subject of weapons, they're nothing special.  The arsenal includes an axe, a chainsaw, a pistol, a shotgun, and a rifle.  Because the fighting is unsatisfying and the collision detection all over the place, none of the weapons, especially the guns, feels like you're doing any damage.  Even when Ash finds upgrades to make them better, they still lack impact.

When you're not struggling with the irritating combat and controls, you're exploring locations to find items to solve puzzles.  Whereas puzzles in the original Resident Evil titles can become time-consuming affairs, here, they're simple and easy to do.  Speaking of simplistic, the boss fights!  In what will become a recurring trend in these games, the boss fights in Hail to the King are basic affairs lacking in difficulty.  The only unique encounter happens late in the game.  While in Damascus, Ash encounters a 20 ft. tall knight with strong armor.  To weaken him, the player needs to pour hot steel and then water, exposing him to attack.  Its decent fight amidst a series of underwhelming ones.

Thankfully, the experience is incredibly short, taking around three hours to beat.  Unfortunately, there are no rewards to obtain for beating the game within a certain amount of time like in Resident Evil.  Plus, why is the game split across two discs on the PlayStation 1?  With how short the story mode is, there wasn't much of a reason to cut the adventure in half.  If there's one positive to this dud, it's that you can spam audio clips to your heart's content while in the inventory menu or when Ash reacts to a locked door or finds something out of reach.


Evil Dead: Hail to the King looks alright.  The pre-rendered backgrounds look fine and the game does a passable job at trying to build atmosphere through said visuals.  What hasn't held up are the FMV cut scenes, which look appalling.  Nothing says terrifying more than PS1 FMV Bruce Campbell.  On that note, while Bruce Campbell does voice Ash, the performance comes off as sounding bored, but give how the dialogue is just the greatest hits of Ash Williams, it's understandable.  The music is serviceable, but none of the tunes stand out, despite the soundtrack having the involvement of famed video game composer Tommy Tallarico.

Evil Dead: Hail to the King is less a love letter to the franchise and more a lazy cash-grab.  The story's reliance on series lore and pointless references results in an experience that's not Ash vs. Evil Dead, but an exercise in monotony.  As for the gameplay, the clunky combat, finicky collision detection, easy-peasy bosses, and short length derail what is a promising concept.  In the hands of a better developer, a survival-horror Evil Dead could have been a fun time, but in the hands of Heavy Iron Studios, it's not.  Although this start to the trilogy is a failure, you can take solace knowing the sequels are vastly better than this monstrosity.