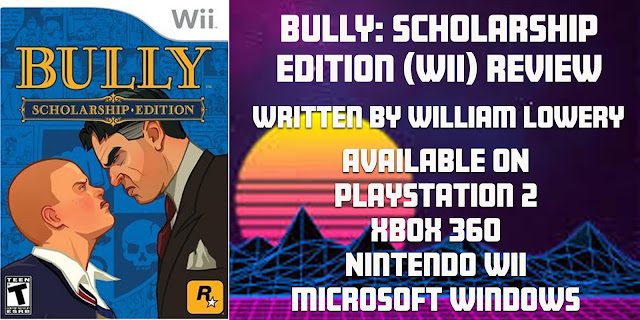 Rockstar Games has been around for over 20 years, and in that time, the publisher has crafted a slew of diverse and entertaining titles.  Much of their work, though, is intended for mature audiences.  This hasn't stop kids from getting their hands on the likes of Grand Theft Auto or Red Dead Redemption, which leads to outcry from parents and media outlets that these games are poisoning the minds of the youth.  Knowing the company's reputation, it's a bit surprising to learn the studio put out a T-rated, open-world adventure in 2006 called Bully, a game which follows a rebellious boy trying to survive life in high school.

Jimmy Hopkins is a rebel.  Having been kicked out of various schools, his mother has enrolled him into Bullworth Academy, a prestige school known for its strict discipline and focus on success.  After meeting the headmaster, Jimmy is introduced to Gary, a student who gives him the lowdown of all the cliques at Bullworth.  Jimmy decides he's going to take over the academy by getting each faction under his control.  After wrangling with the jocks, nerds, and greasers, Jimmy succeeds, but he's unaware Gary is working behind the scenes to turn the cliques against Jimmy, so he can assert his dominance over everyone at Bullworth.

Bully is a far cry from the gangs, criminals, and seedy underbellies that make up any Grand Theft Auto title.  Its focus on adolescence and high-school hijinks make this feel like what would happen if you took The Breakfast Club or Animal House and the people at Rockstar remake it into a game.  Despite the title, Jimmy isn't quite a bully.  He's brash and aggressive, but only because he has a lot on his shoulder.  His mother is re-marrying for the umpteenth time and is more enamored with the husband of the week than looking out for her son.  Jimmy's struggles pale in comparison to what's going on at Bullworth.

Jimmy's misadventures double as a way to explore the deconstruction of high-school cliques, showing us that many of the students who identify with a particular group only do it to hide their insecurities.  He realizes their vulnerabilities and exposes each clique leader for who they really are.  The students are relatable, and for as much as the game focuses on growing up and discovering oneself, it still has plenty of laughs.  The adults are set up to be the bad guys, but they have just as many problems as the kids, from alcoholism to fraud to infidelities.  The real villain is Gary, a self-absorbed narcissist who manipulates people to get what he wants.

Bully is an open-world game, and though this was developed and published by Rockstar, this isn't exactly Grand Theft High School.  Over the course of the school year, Jimmy will go to class, complete missions, and explore Bullworth Academy and the surrounding town.  The game is split into chapters, and as the story progresses, more of the world becomes explorable.  There's a day/night cycle reminiscent of the one in Dead Rising, in the sense that time moves at a speedy pace, and the window of opportunity to do certain tasks becomes narrower depending on the time of day.  Also, if Jimmy stays out too late at night, he'll pass out.

Classes include English, Biology, Geography, Shop, and Gym.  Each class consists of a minigame you must beat to pass.  For example, Biology has you dissecting animals with medical equipment a'la Trauma Center, while Art is like Snake, as you have to draw in squares to fill in a painting while avoiding obstacles.  Completing classes rewards Jimmy with new skills, weapons, items, and clothing options.  You can skip class if you want to go do a mission or goof off, but hall monitors, and police patrol the campus and town.  If you're spotted playing hooky, getting into fights, or causing vandalism, the alert meter goes up, drawing any nearby authorities to your area.  Evading them can be done by getting the heck out of dodge, or by hiding in a dumpster or locker, provided they don't see you when you do this.

Taking control of each clique requires Jimmy to partake in a series of missions.  As your affiliation with one group goes up, it might lower with others.  The lower the percentage, the likelier it is you'll be attacked.  Whenever Jimmy finds himself in a scuffle, you can use fisticuffs to lay the smackdown.  Flicking the Wii remote and nunchuck to unleash punches, kicks, and grapplers works well enough.  You can also use environmental objects and a bag of tricks to keep them at bay.  The arsenal includes bags of marbles, eggs, a slingshot, and later on a fireworks launcher and potato gun.  New fighting techniques can be learned by going to gym class or finding transistor radios for a homeless war veteran who lives behind the school.

Bully is loaded with lots to do, but not to the point it seems impossible you'll see everything, as the game can take 12 to 14 hours to beat.  Besides the school, there's also the town, which has shops to purchase stuff from, challenges and oddjobs, as well as a theme park filled with rides and other attractions.  Jimmy has a skateboard on him for easy transportation, with bikes and mopeds becoming available later on.  If you're in a rush, use the bus stops to get back to school with ease.  A conversation system lets Jimmy interact with students and adults positively or negatively.  It's limited in scope, but it's fun.  Certain classes like English and Art grant Jimmy perks that increase his odds of talking his way out of a fight or getting lucky with one of the females.

Bully was re-released onto the Xbox 360 and the Nintendo Wii as Bully: Scholarship Edition.  This version features new content, enhanced visuals for the 360 version, and motion controls for the Wii port.  I played Bully on the Wii, and though the graphics are more on par with its original PS2 release, it's still a darn good game.  The only caveat is the control scheme.  The controls are both intuitive and cumbersome.  The limited number of buttons on a Wii controller leads to aa lot of actions requiring button combinations or gestures, many of which feel strange to pull off.  The flip side is that the pointer is used to great effect.  Aiming the slingshot or camera is a bit sensitive, but the likes of Biology and Music are easier to do since those involve the pointer or motion controls.  Plus, beating up folks is more satisfying with gestures than button-pressing.

As stated before, the Wii version of Bully doesn't look too different from its PS2 predecessor.  The models and lighting are a tad sharper, but not by much, and there's some pop-in and draw distance issues.  What it lacks in technical prowess it makes up for with how lively the world is.  You'll notice students making their way to class, talking with one another, or pulling pranks and getting into fights.  Little details like that make Bullworth Academy seem more alive and less like an empty playground.  Voice acting is impressive and the dialogue sounds like stuff kids and teens would say, and a lot of it is hilarious.  The music is interesting, as it's equal parts whimsical and funky.

Some will say any of the Grand Theft Auto games or Red Dead Redemption is their favorite Rockstar title, but for me, it's Bully.  I found myself more invested in the world of Bullworth than I did Liberty City or Vice City.  It's probably because this is a game about going to high school and figuring out your place in the world.  Jimmy Hopkins might seem like a rebel, but that's far from the case.  The gameplay adheres to the sandbox formula, but the setting leads to interesting twists on many of the genre conventions.

Completing missions and classes is entertaining, which is weird to say for a game about high school, but is the Wii version the way to go?  If you want the smoothest experience, play the 360 port.  Bully on Wii is still good, but you will have to put up with some wonky controls and iffy aiming, but it doesn't ruin the experience.  This is probably the best open-world game on the Wii, which, given the competition it has with other sandbox titles on the system, doesn't say much.  Either way, Bully rules and it's understandable why it's garnered such a devoted following since it came out.