Greetings, readers!  It is I, William Lowery, here with an update, because some of you might be wondering where all the reviews and commentaries are.

Don't worry I haven't had another bout of writer's block due to the stresses of work and a terrible boss, far from it.  On the contrary, I left my job at Little Caesar's at the beginning of July after four years of working there.  Afterwards, I took a trip to Missouri to attend the Crypticon convention and had a blast there.

I met a lot of guests, helped out the folks at Revival House, and got a slew of merchandise.  Since my return from Missouri, though, I've been on the hunt for a job, which is why none of my regular content has been published.

Make no mistake, it's been difficult finding work, but the odds seem to be turning in my favor and I should have a job soon, hopefully.

Rest assured, I'll be back in the swing of things when August rolls around.  Wolfenstein Youngblood releases tomorrow, and I plan on writing a review on it in the weeks to come.  Though I haven't published any reviews, I have been playing games and watching movies that I plan on covering in the next few months, especially those related to Drive-In of Terror.

Whereas previous Drive-In of Terrors have been haphazard affairs, this year I've stepped up my game and have knocked out a bunch of titles that I'll be covering in the next few months.  I can't say much on this year's roster, but what I will say is that if you remember the DOT I did in 2017, I only covered one Evil Dead game from the three released back in the 2000's. Suffice to say, I have unfinished business.

This summer has been pretty hectic.  From discovering I won't be graduating till next May instead of this December to leaving my first job, one which I had been at for four years, it's been all over the place.  Yet, I've kept my head up since I know everything will be fine in the end.

Also, I'm going to attempt to commit to a schedule starting next month.  I drafted one out back in June but haven't really followed it.  If I want to be consistent with my publications and setting time off to the side to write or record audio, scheduling out my days will go a long way towards consistency.

I thank those who have stuck out through these tipsy-turvy times.  My website hit 7,000 views a few weeks ago, which is nuts.  It may not seem like much to some, but it means a lot to me.  It shows I can pull this off and make GamerGuy's Reviews something I do for a living, rather than just a hobby.

P.S. Destroy All Humans is coming back?  FINALLY!!! 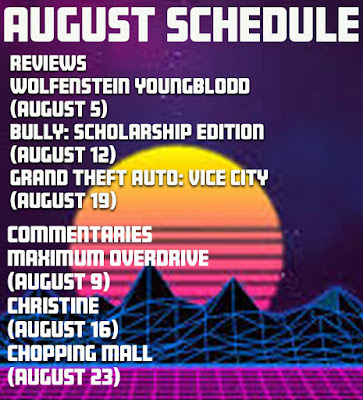 Posted by William Lowery at 6:08 PM