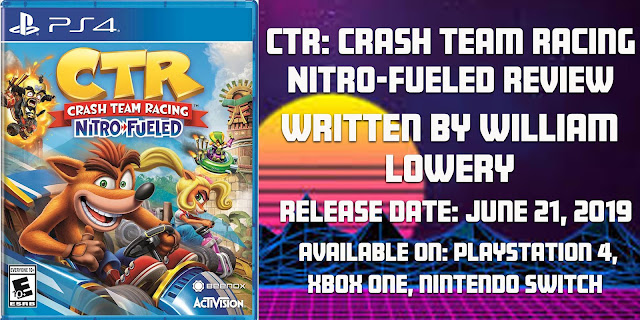 In the winter of 2000, our family got a PlayStation One and with the system came Crash Team Racing, the first game I ever played.  At the time I had no idea who Crash Bandicoot was or that the game was a spin-off.  All I knew was that the game let me drive a race-car and go fast, which was perfect.  Funnily enough, CTR was the only Crash Bandicoot game I had played for many years, up until a few years ago when I found a copy of Crash Bandicoot 2 at a convention.  After the success of the Crash Bandicoot and Spyro remakes, it seemed inevitable CTR would receive the same treatment, and lo and behold, it did.

Nitrous Oxide, the galaxy's fastest racer, parks his spaceship outside Earth and delivers a video message to the planet's inhabitants.  He warns the planet will be turned into a gigantic parking lot if no one chooses to race him.  Hearing this message, all of the Crash Bandicoot characters, good and bad, begin building their own vehicles with the hopes one of them will be able to race against the extraterrestrial visitor and save Earth from its impending doom.

CTR's set-up isn't too different from previous Crash Bandicoot adventures.  The only difference is instead of being a platformer, it's a racer.  It's a simplistic plot, but it gets the job done.  Each world features a boss for the character to race against.  The remaster overhauls cinematics, so instead of the opponents speaking to the driver in front of the garage like in the original; here, there's a lot more interactivity between the two characters, which makes things more livelier than before.  Story isn't the reason to play a racing game, no, the point is to go fast and get first place, and in that departmnt, CTR: Nitro-Fueled excels.

Similar to the remasters of Crash Bandicoot and Spyro, CTR: Nitro-Fueled preserves the base game, but overhauls the visuals, various gameplay mechanics, and adds in new content to make it a more robust experience.  Offline modes include Adventure mode and split-screen multiplayer for up to four players.  Adventure mode is similar to its 1999 counterpart, but there are now two variants: Classic and Nitro-Fueled.  Classic functions similarly to the original in that the player can only choose one character and must stick with this character throughout the entire mode.  On the other hand, Nitro-Fueled lets one switch between all of the available racers at any time, as well as customize their karts.

No matter which option is selected, the goal of Adventure mode is to defeat Nitrous Oxide, which involves traveling from one hub world to the next, beating the races and later the time trials to collect all the trophies and time relics, which are necessary for defeating Oxide for good.  The three variations of racing include the standard race, time trial, and CTR races.  The basic race involves beating the other opponents to win first place.  Time trial tests the player's skill with drifting and power sliding in an effort to get the lowest time possible.  Finally, CTR races are like normal races, except hidden across each track are the letters C, T, and R, which have to be collected to earn a token.

To become the fastest racer alive, one must master the art of drifting.  At first glance, CTR: Nitro-Fueled has all of the tropes associated with kart racers, such as colorful environments and characters, plus an eclectic assortment of items to use against the competition.  It's when you get into power-sliding that the game opens up.  Holding the hop buttons causes a vehicle to slide, and when the exhaust turns black, pressing the opposite shoulder button results in a boost, which can be done up to three times.  A meter in the lower right-hand corner indicates when the right time to boost is.

Driving is tight and responsive, so the game is easy to pick up and play, but for those looking to skillfully master drifting, the choice is available.  Getting good at gathering speed is important as the story mode can get quite challenging.  Opponents put up a fair fight and will gladly leave you and the others in the dust.  Part of it is due to cheap rubber-banding.  It doesn't always occur, but when it does, get ready to hit the restart button.  To keep rivals at bay, there are items.  Breaking a question mark crate provides the racer with a random weapon, be it bowling bombs, heat-seeking missiles, TNT crates, or chemical vials.

Collecting ten wampa fruit not only makes vehicles faster, but it also boosts weapon damage.  Bowling bombs roll faster, TNT crates become Nitro crates, which detonate upon impact, and the effects of hitting a chemical vial last longer.  Things can get pretty chaotic during races, and it's made more hectic by the bosses, who spam a particular weapon repeatedly in an effort to slow you down.  There are little tricks to learn that can mitigate some of the danger.  For example, drop a chemical bottle to stop an incoming missile, or hop repeatedly if a TNT crate gets stuck on your head.

Each hub world features four race tracks, a boss, and a purple token challenge.  Token challenges involve racing around an arena to collect twenty purple crystals before time runs out.  In addition to winning trophies, time relics, or tokens, racers are rewarded coins, as well as new skins, characters, and vehicles.  Coins can be used at the Pit Stop to purchase more of the aforementioned items.  The good news is there are no real-world dollar fees attached to these goods, the catch is the amount of grinding it will take to acquire coins.  The game encourages people to play online matches, since more coins are earned there than in Adventure mode, but what it boils down to is a lack of proper balancing, and such a pay scheme calls to mind mobile games with pay-to-win options.

CTR: Nitro-Fueled features all of the content from the original Crash Team Racing, yes, even Penta Penguin, but there are also characters and stages from the sequel, Crash Nitro Kart.  The game is meaty enough as it is, so the bonus content from its follow-up is a welcome addition.  Unfortunately, the race tracks from Nitro Kart are only available in the other solo and multiplayer modes, not Adventure, which is a shame, because it would have been interesting to see this content incorporated into the story mode, possibly as an end-game reward.  Also, Crash Nitro Kart characters are only obtainable via the Pit Stop, so if you want to play as Crunch, better start saving up.

Aesthetically and artistically, CTR: Nitro-Fueled is leaps and bounds better than the basic, polygonal visuals of the PS1 game, which were impressive in their own right.  Every track is bright, vibrant, and incredibly detailed.  There's a lot of background action going on in each stage and in the hub worlds, but you'll hardly be able to stop and marvel the little touches since you'll be focused on winning first place.  Look closely in some levels, and there are nods to later Crash Bandicoot games, such as Crash Tag Team Racing and Crash Twinsanity.  Voice acting is minimal, but what's there is good, and the soundtrack takes the original tunes and enhances them, making each one sound more full-fledged than ever.

Crash Team Racing was a fantastic racer, and Crash Team Racing: Nitro-Fueled preserves what made it great.  Racing is fast, frenetic, but also incredibly responsive.  Accessible controls make it easy to master drifting and become a proficient racer.  The other additions, whether it be being able to choose between old and new variations of Adventure mode, or race on tracks from Crash Nitro Kart, are great bonuses.  Although the gameplay and visuals are excellent, getting rewarded for racing leaves a lot of room for improvement.  The endless grind to get coins and purchase trinkets in the store is unnecessary and deceptive, and will hopefully get balanced out somewhere down the line.  It's still a great game, but the monetization does dour some of the fun.