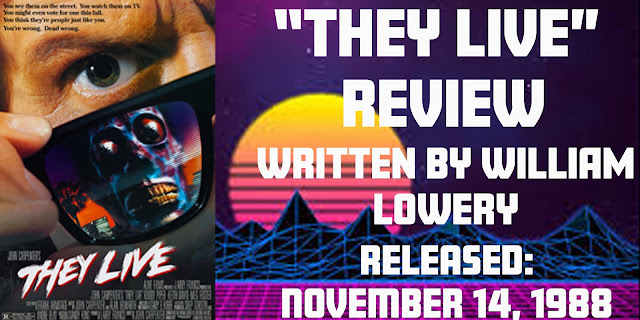 The 1980's is considered one of the greatest decades in history, and why not?  It was a decade which doubled as a huge cultural shift in America.  It's the era which gave us the NES, new wave, heavy metal, and great films such as Back to the Future and Indiana Jones.  The 1980's also pushed the idea of big spending, thanks in part to the economic plans of then-President Ronald Reagan.  Yet, the push for capitalism and consumerism only seemed to create a false sense of conformity, so as to deflect people from the troubling woes of layoffs and debt which were the repercussions of Reaganomics.  As a response to the rise of consumerism, John Carpenter satirized the concept with his film They Live.

John Nada (Roddy Piper) is a drifter who's just arrived in Los Angeles looking for work and a decent pay.  He gets a job at a construction site and joins a refugee camp run by a local church.  Things are going good for Nada, but he starts to notice a lot of strange things going on, especially at the church.  His suspicions increase further when the camp is destroyed by the police.  In the aftermath of the riots, he stumbles across a cardboard box filled with sunglasses.  He tries on a pair, only to discover the horrible truth: the world is being run by aliens posing as the wealthy and the elite.  Armed with a shotgun and a healthy supply of one-liners, Nada and his friend Frank (Keith David) set out to stop the invasion happening underneath our noses.

They Live is an ode to science-fiction movies of the 1950's, especially Invasion of the Body Snatchers.  Similar to that movie, the aliens are disguised as humans, but whereas everyone regardless of class could be an alien in disguise, director John Carpenter has his extraterrestrial visitors pose as the rich and the Republicans, who manipulate lower echelons of society via subliminal messaging.  They Live is based on a short story called "8 O'clock in the Morning," and Carpenter, frustrated with the direction America was going under the Reagan administration, adapted it into a movie.
At the time, then-Presidnet Ronald Reagan had led America into a period of prosperity via his economic plan dubbed "Reaganomics," which reduced government spending and put a stronger emphasis on free markets.  Reaganomics emphasized big spending, which wasn't a problem for the wealthy, but became an issue for the middle class and poor, which resulted in an increase in debt and poverty.

John Carpenter wasn't the only filmmaker to mock capitalism and Reagan during the 80's.  The likes of Alex Cox and Paul Verhoeven took their own pot shots via films like Repo Man and RoboCop, yet such satire was merely subtext, whereas Carpenter goes straight for the jugular.  Ironically, much of what is explored in this movie remains relevant to this day.  The proliferation of technology and the rise of social media has made it easier for companies to not only sell products, but to manipulate the masses.  Major news stations are now tailored to specific audiences and promote bias and an agenda rather than give actual news.  It's chilling to think that a movie like They Live could be just as important now as it was back then.

At the center of the chaos and confusion is John Nada, played by Roddy Piper.  Being a fan of wrestling, John Carpenter thought Roddy Piper would be a good choice for the role, and he is.  Piper brings his onstage charisma and charm into the character, and the dialogue plays to his strengths.  He starts off as an everyman, but once he puts on the glasses and sees what's really going on, it's time for him to chew bubblegum and kick ass, but he's all out of bubblegum.  No wonder Duke Nukem took a lot of inspiration from Nada's no-nonsense attitude.

Besides Nada, there's Frank.  When we're introduced to this character, he's just looking for pay to support his family back in Detroit, and after Nada gains notoriety for his shooting rampages, he's quite hesitant to believe Nada's ramblings about aliens posing as cops and businessmen.  How does Nada convince Frank?  By beating the holy hell out of him.  In one of the film's greatest moments, Nada and Frank have a five-minute long brawl in an alley, just so Nada can get him to try on the glasses.  As brutal and epic as this fight is, there's an amusing irony to the whole ordeal since it all revolves around a pair of sunglasses.

Weirdly, said sunglasses are a character in of themselves.  With the shades, people can see the world for what it really is, a monochrome reality where signs, billboards, and currencies are just subliminal messages with commands such as "Obey," "Conform," and "Marry and Reproduce."  The build-up to the reveal is great.  Up until Nada puts on the glasses, the movie plays out like a blue-collar drama instead of a science-fiction film.  Hints are dropped throughout the first act that something is amiss, but when the glasses come on, the movie kicks into gear.  Adding to the lifeless nature of the real world is the aliens, who look like humans, but with exposed flesh, muscle, and no eyelids.

Though they hail from an unknown galaxy and use the PKE meter from Ghostbusters as communicators (no, seriously, it's the same prop), the aliens are nothing more than intergalactic real estate moguls.  They travel from planet to planet, altering its environmental conditions so that the place is suitable for their kind.  Nearly everyone is oblivious to what's going on, but those who do know have chosen to sell out in exchange for wealth and other material goods.  One of these individuals is a homeless man (George "Buck" Flower), who disappears after the police raid on the camp, but is later revealed to be alive and well, not to mention rich.  When Nada asks why people are selling out to the aliens, he explains:

"What's wrong with having it good for a change?  Now, they're gonna let us have it good if we just help 'em.  They're gonna leave us alone, let us make some money.  You can have a little taste of the good life too.  Now, I know you want it.  Hell, everybody does.  What's the threat?  We all sell out every day, might as well be on the winning team."

They Live is topical but fun, and the lulls in between the shoot-outs and fisticuffs are devoted to exploring the backgrounds of the major players as well as to speculate on the true intent of the aliens.  The character are great, with the exception of Holly (Meg Foster).  Holly works with the TV station broadcasting the signal that keeps the aliens in disguise and prevents people from seeing the truth, but it's obvious from the moment she's introduced that Holly is a double-crosser.  Unfortunately, Nada is oblivious to the obvious up until the very end when he's cornered between her and a police helicopter just as he's about the destroy the antenna.

They Live might have been produced on a small budget, but what it lacks in money it more than makes up for with its imaginative visuals.  There's an eerie beauty to the black-and-white cinematography done to show the bleak soullessness of the world.  One shot that stands out is when Nada is walking around, taking everything in, and he looks off into the distance to see the city skyline dominated by all manner of subliminal messaging.  The make-up of the aliens is great, and in a nice nod to Night of the Living Dead, the aliens are referred to as ghouls in the end credits.  This can be seen as both an homage and a reference to how these beings are like dead-eyed versions of us.


Those familiar with John Carpenter's filmography know that his films always have a score done by the man himself, sometimes in collaboration with Alan Howarth.  While the soundtrack consists of ambient beats, it's still very good.  My personal favorite is the opening tune, which has a laid-back, Old West vibe to it, and fits perfectly with the shots of Nada as he strolls through Los Angeles searching for a job.

They Live is a biting satire on the dangers of unrestrained capitalism and consumerism, wrapped around a pulpy science-fiction thriller.  Time marches on, but the themes of They Live still resonate in today's world.  Though it's packed with quotable lines and one of the greatest fights in the history of mankind, it's also a warning about how companies, politicians, etc. are more than capable of manipulating society with ideas of conformity and wealth via advertising, products, and spiteful rhetoric against those who dare to question authority.  After all, we sell out every day, so why not be on the winning side?