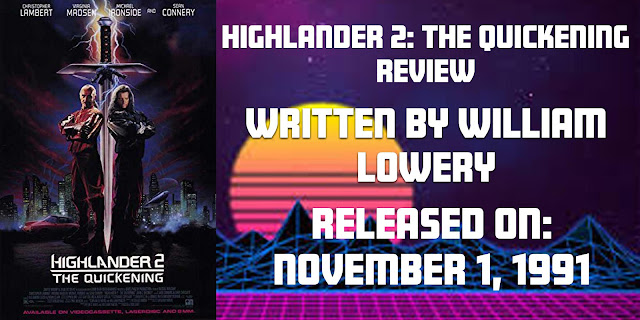 To sequel or not to sequel?  That is the question.  Sequels have increased in frequency in the last 30 years.  Every weekend, sequels to popular franchises are released, and people flock in droves to see them.  Yet, not every movie deserves a sequel.  When the story is wrapped up with no loose ends, why bother continuing the narrative, unless the writer or director can bring something new to the table.  To me, a sequel can only happen via the following rules:

1. Does the movie end in such a way that it would be possible to do a sequel somewhere down the line?

2. Does the world leave room for expansion?  Could you keep the concept, but expand on and delve into the lore of said universe?

3. Do the characters from the original have a reason to come back, even if his or her story was finished in the previous picture?

Unfortunately, many sequels break these criteria, and with many franchises, the longer it goes with no purpose, the more irrelevant it becomes.  Highlander ended with Connor MacLeod defeating the Kurgan and winning the prize, which made him mortal but granted him with unlimited knowledge and superior intellect.  Then comes Highlander II, a film which not only retcons and undoes everything established in the original, but also invents new rules and backstory which only serve to confuse and anger fans of the 1986 cult favorite.

2024.  Connor MacLeod (Christopher Lambert) is old and frail.  In 1999, him and a team of researchers built a shield to surround Earth after the ozone layer was depleted in 1994, killing millions, including his love Brenda.  Seeing he is in a weak state, General Katana (Michael Ironside), orders a pair of assassins to travel to the present and kill him.  Connor runs into Louise (Virginia Madsen), an environmentalist who's gathered evidence proving the ozone layer has healed up, meaning the shield no longer needs to be active, but he dismisses her claims.  He's then attacked by the assassins, and when he decapitates one, the Quickening occurs, and he is young once again.  Fully rejuvenated, he teams up with Louise and resurrects his old friend Ramirez (Sean Connery) to disable the shield and stop General Katana, who has arrived on Earth to put an end to Connor.

Did you love Highlander and its interesting premise, memorable characters, and amazing soundtrack?  Well, here's Highlander II to ruin it all for you!  There are many words to describe this disaster, such as bad, incomprehensible, baffling, and inane, but unnecessary is the best way to describe this train-wreck.  At the end of the original, Connor defeated the Kurgan, won the prize, and became mortal.  Rather than focus on a new generation of Immortals or delve into more of Connor's history as an Immortal, the movie opts to undo everything Connor had fought for and been rewarded with.  Worse, Highlander II attempts to explain where the Immortals came from, and it's as bad as one would expect.

According to this movie, Connor and Ramirez are from a civilization in the distant past.  They were the leaders of a resistance group trying to overthrow General Katana's dictatorship, but they failed.  As punishment, the two were teleported into the future and onto different points of the planet, and to win the prize means either to return to the past or stay in the present.  Somehow, those in the past are capable of monitoring what's going on in our times, hence why Katana knows of Connor's whereabouts.  If this explanation has you going, "Wait, what?"  Congrats, because the attempt to expand upon the origins of the Immortals is a confusing mess of an explanation.

Keep in mind, the information described above refers to the director's cut; originally, the Immortals were aliens from the planet Zeist exiled to Earth.  All references to Zeist were removed when the director's cut came out, and though the film is more coherent because of this change, it still doesn't account for a number of the other issues still present.  If Connor and Ramirez knew each other, how come they didn't recognize one another when the latter showed up at Connor's doorstep in Highlander?  And if General Katana knew Connor was alive, why didn't he try to seize the opportunity and kill Connor after he won the prize, instead of waiting for him to reach seniority to do so?

Secondly, why give the winner the option to return to the past since what we're shown of this civilization isn't exactly a tourist attraction.  Highlander II also adds new powers for Connor to use, like being able to resurrect Immortals by calling their name, which he does to bring back Ramirez.  If he has this power when he's immortal, why didn't Connor just immediately resurrect his mentor after the Kurgan decapitated him in the first film?  There are enough holes in this story to call it Swiss cheese!

Characters, both new and returning, are disappointing.  After Connor regains his immortality, he isn't too perturbed by the fact he's regained this ability, even though in Highlander, he wanted to become mortal and live a normal life after 500 years of being unable to age and die.  Ramirez is now a fish-out-of-water who spends most of the runtime looking for Connor and trying to make sense of the world he's been brought back into.  Instead of being the wise but sarcastic mentor that he was beforehand, he's a comedic buffoon.  Worse, after the two reunite, Ramirez is promptly killed off.

Then, there's General Katana, Connor's long-time rival that isn't the Kurgan.  Michael Ironside is a great actor, but all he does is laugh maniacally and spout cliche dialogue about how he'll put an end to MacLeod.  He's nowhere near as intimidating or menacing as Clancy Brown's character and the attempts to make him a threat fall flat.  After he arrives on Earth, Katana takes control of a subway and increases its velocity to the point it derails and crashes, which comes off as a poor man's take on the Kurgan's hit and run rampage in Highlander.

His villainous scheme and other decisions make him seem incompetent too.  If General Katana knows Connor is old and on the verge of death, why not just let him die instead of sending his mooks to kill him, especially since he knows anyone who comes from the ancient world and into the present will only restart the Quickening.  Even his two lackeys point this out right before he sends them off.  Louise, Connor's new love interest, is forgettable, though her first encounter with the born-again MacLeod leads into an unintentionally hilarious moment where the two of them immediately shag in an alleyway.  Guess the Quickening is a stimulator in more ways than one.

Highlander II: The Quickening is a both a bad movie and one with an inconsistent direction.  Is it a sword-fighting fantasy adventure or a poor-man's Blade Runner?  Much of the action takes place in futuristic Los Angeles, which looks like Gotham City for some strange reason.  Everyone drives 1940's/1950's-era cars and flies in planes with propellor engines, yet hoverboards exist as well.  The unusual production design is punctuated by fake ads and news-breaks clearly ripped off from, I mean, inspired by the ones seen in RoboCop.  Although a colossal mess, at least the production value is good, and Russell Mulcahy is back in the director's chair, lending his slick cinematography to the movie.

There's plenty of action in this sequel, though much of it is unspectacular.  The bigger budget does allow for more scenes where Connor, Ramirez, or General Katana get their bodies mutilated, only for them to regenerate via immortality.  In one scene, Connor's body contorts itself back into place after he's caught in an elevator crash.  The best moment is when Connor and Ramirez infiltrate a prison by barging through, getting shot up by the guards, and then taken to the morgue, from which they then wake up and resume business.

Michael Kamen didn't return to do the music and in his place is Stewart Copeland.  Yet, none of Copeland's compositions hold a candle to Kamen's work, and the only times it does stand out is when it uses music cues from the original, such as a brief orchestral reprisal of "Who Wants to Live Forever?" during a scene with Connor and Louise, but all it does is remind the viewer they could be watching Highlander instead of this garbage.  There's no Queen either, aside from "It's a Kind of Magic," and the licensed songs present have got nothing on Queen's tunes from the first.

Highlander's trademark phrase is "There Can Only Be One," and there should have only been one movie since Highlander II: The Quickening is appalling.  It's a textbook example of when not to do a sequel.  It lacks coherence, contradicts much of the lore established in the previous adventure, and is an overall mess.  The budget is bigger yes, allowing for more lavish sets, but more money doesn't equal a better movie.  It's never a good sign when the origin story is drastically altered by way of a re-release after the initial backstory creates all sorts of problems.

Due to the film's notorious reputation, future installments retconned this flick out of existence, and while some will argue the likes of Highlander 3 and the TV series are a step above this turkey, all they ended up doing was dragging the name of a beloved movie further and further into the ground.  Highlander is like a majestic ship, and Highlander II: The Quickening is the iceberg which slowly sank the movie to the bottom of the ocean.