Godzilla: King of the Monsters (2019) Review 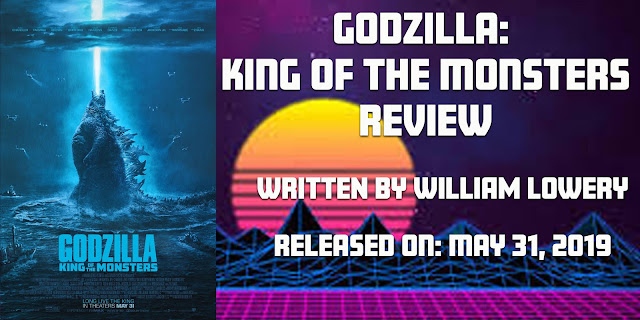 "With a purposeful grimace and a terrible sound, he pulls the spitting high-tension wires down," for music and movie fans alike, they will recognize that as the opening lyrics to Blue Oyster Cult's "Godzilla," a song about the fearsome creature.  Since his creation in 1954, Godzilla has time and time again attacked Japan, and occasionally defended it from another monster.  With over 30-plus movies, Godzilla is a certifiable pop-culture icon.  In 2014, director Gareth Edwards released Godzilla, and though the movie had its flaws, it was certainly more faithful to the franchise than the 1998 movie which starred Ferris Bueller and a lot of fish.

Cinematic universes have been on the rise thanks in part to the success of the Marvel Cinematic Universe, so it only made sense to apply this formula to Godzilla as well.  Although only consisting of three films so far, with a fourth coming next year, the Monsterverse definitely has quality over quantity in its favor.  On May 31, Godzilla: King of the Monsters, the highly anticipated follow-up to the 2014 movie, released.  Directed by Michael Dougherty, this big-budget, monster-filled sequel brings in more of Godzilla's recognizable friends and foes, including Mothra, Rodan, and King Ghdorah, and sets the stage for a world where giant monsters are an everyday occurrence.

During the events of Godzilla, a family suffered the loss of a son during Godzilla's fight with the MUTOs in San Francisco.  Unable to move on from the incident, the parents, Mark and Emma Russell (Kyle Chandler and Vera Farmiga respectively) break up, with Emma taking custody of their daughter (Millie Bobby Brown) and continuing her work with the research organization Monarch.  While on the job at one of the group's sites, the place is attacked by a group of terrorists, led by Alan Jonah (Charles Dance).  Jonah kidnaps Emma and her daughter since she created a device called the Orca, which emits frequencies only monsters understand.  Jonah wants her to use this device to awaken an ancient creature nicknamed "Monster Zero," who is kept on ice at a Monarch facility in Antarctica.
When Monarch gets word of what's going on, the organization tracks down Mark and persuades him to join them in their efforts to find Emma and stop whatever the terrorists have planned.  They make it to Antarctica but are too late to stop Jonah and Emma from releasing the imprisoned beast, which is King Ghidorah.  After Ghidorah escapes, Monarch realizes the only thing capable of stopping him is Godzilla, of which the two share a long history with.  Monarch needs to act quick as the actions of the terrorists leads to even more monsters being awakened across the globe, including a prehistoric monster called Rodan.

In many ways, King of the Monsters is an improvement over its predecessor.  Instead of a slow-but-steady build-up to the penultimate clash with Godzilla and the other monsters, the film wastes no time getting to the giant monster action.  Fans of the series will greatly appreciate the treatment the likes of Ghidorah, Mothra, and Rodan have received.  Their designs have been updated, but their abilities remain the same, albeit with a few modifications.  For example, the three Ghidorah heads each have their own personalities, instead of being a single-minded animal, and wherever the three-headed dragon goes, it generates all manner of severe weather in its path.

These four kaiju aren't the only ones to join in on the destruction, as there are brief appearances by other monsters that serve as hints of what's to come, should this line of films continue on.  It's clear Michael Dougherty is a fan of Godzilla, and there's plenty of references to series lore, both obvious and subtle.  Keen-eyed viewers will notice nods to the fairy twins from Mothra, and even a reference to Godzilla vs. Destoroyah, but the less said about this moment, the better.  No Godzilla movie is complete without human drama to balance out the destruction, but when the movie takes its time to develop the story and characters, cracks begin to show.

Godzilla (2014) was heavily criticized for its lackluster protagonists, save for Bryan Cranston and Ken Watanabe.  Godzilla: King of the Monsters boasts a large cast of characters, most of them forgettable, despite the list of capable actors and actresses on hand playing them.  The focal point of the movie is the Russell family and their struggles to re-unite, in spite of all they have been through.  For some reason, every American Godzilla movie needs to have a troubled family storyline; the 2014 flick had a similar sub-plot, but instead of a father and son, it's a father, mother, and a daughter.  It's a bit tiring to see this trope again, since we know what the outcome will be.

More characters mean some individuals are more fleshed out than others, but not by much.  One of the most prominent examples is Alan Jonah.  Although he's the bad guy, Jonah sort of disappears later in the picture, even though one would expect him to stay prevalent up until the end.  Monarch, the organization dedicated to researching giant monsters, is filled with largely anonymous individuals.  For example, there's a squadron of soldiers who act as special security, but they aren't given much to do, aside from fight off monsters.

Additionally, there's a scientist whose sole purpose is to provide exposition and act as bad comic relief.  The sole highlight in all of this is Dr. Serizawa (Ken Watanabe).  He's given a lot more to do here than in the previous film.  He's a man fascinated by the existence of the kaiju, particularly Godzilla, but at the same time, he realizes the threat they pose to mankind.  Much like Serizawa from the 1954 original, this version of the character ends up making a sacrifice for the greater good of humanity.

One positive to the story is that it does a good job at world-building.  This is a world trying to come to grips with the fact that monsters exist and at any point, could show up and destroy a city, which leads to conflicts over what should be done with them.  However, the presence of the kaiju also leads to an unnecessary environmental message in which giant monsters are apparently the solution to saving the environment.  See, I always knew Godzilla was an environmentalist!  There's also an unexpected McGuffin halfway through the picture which only acts as a means to disable a particular kaiju until he's resuscitated for the big showdown.  Though this device is intended to be an homage to the original Godzilla, it's also random and comes out of nowhere.

For all of its faults with storytelling and crafting compelling characters, King of the Monsters certainly doesn't slack off showing epic, city-destroying spectacle at the hands of Godzilla, King Ghidorah, etc.  It's impressive to watch, and there's plenty of jaw-dropping moments peppered throughout, such as when Rodan uses the supersonic winds from his wings to annihilate a small city while flying over it.  Some of the fights are shot a bit too close for comfort, which was probably done to show off the ferocity of the creatures.  Also, because of King Ghidorah's new ability to generate thunderstorms, much of the kaiju combat is shrouded in rain and darkness, which gives me Vietnam flashbacks to Godzilla (1998).

As for the soundtrack, it's simply and purely amazing.  Bear McCreary did a phenomenal job with the music.  Hearing the iconic Godzilla theme on the big screen will get your heart pumping, I can tell you that much, and there's even an impressive rendition of the Mothra song.  It's a bombastic score which fits with the colossal monsters and their cataclysmic destruction.  Special shout-out goes to the cover of Blue Oyster Cult's "Godzilla" that plays during the end credits.

Is Godzilla: King of the Monsters better than Godzilla (2014)?  Yes and no.  If you were disappointed by the lack of Godzilla and the constant tease and build-up Gareth Edwards went with, then you'll be pleased by the increased screen-time for all of the monsters.  If the 2014 movie attempted to be like the original Godzilla, then this sequel is more in line with the outlandish installments that followed in its wake.  Unfortunately, the story is a bit all over the place, as are the characters.  It comes close to surpassing its predecessor, but it doesn't quite hit the mark.  Still, this is an entertaining flick, and Godzilla fans should be more than satisfied with this sequel.  Now, how much longer till they bring Jet Jaguar into the series?