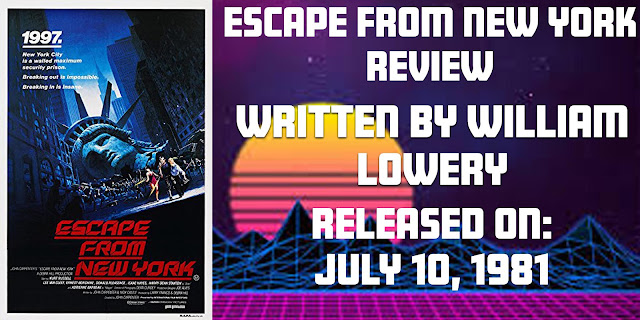 New York City, a.k.a. the City that Never Sleeps, the Big Apple, Gotham City, the list goes on.  It's the cultural capital of America, home to an array of famous landmarks, diverse districts, and strangers dressed up as superheroes trying to get uncomfortably close to kids in Time Square.  With a population of 8.6 million people, the city has been subject to all sorts of disasters in films.  Whether it be giant gorillas, giant iguanas supposedly called Godzilla, or Cannibalistic Humanoid Underground Dwellers, the city is a popular choice for science fiction and horror filmmakers.  Then comes Escape from New York, which asks the question: what if crime got so out of control in America, the government decided to turn the bustling metropolis into a walled-off prison?

In the distant future of 1988 (!), the national crime rate has risen by 400 percent, to combat this problem, New York City is converted into a giant prison where any and all criminals get sent to for permanent stay, and should they try to escape, death is swift.  In 1997, Air Force One is highjacked by terrorists, who crash the plane into the city, but the President (Donald Pleasance) survives via an escape pod.  One of the gangs living in the city kidnaps and holds him for ransom, so the heads of the prison island have no other choice but to send in Snake Plissken (Kurt Russell), a war hero turned criminal who's just been arrested for attempting to rob the Federal Reserve.  Snake is given an ultimatum: if he goes in and brings the President out, he'll be pardoned of his crimes.  To ensure he gets the job done, microscopic capsules are lodged into his neck, and if doesn't rescue the President within 24 hours, the capsules will dissolve and slowly kill him.

Escape from New York has a basic set-up, the President has been captured by a bunch of goons, is Snake a bad enough dude to rescue him?  New York City being turned into an isolated, urban jungle sounds preposterous, and it is, but never does the film step into self-parody.  What could have been a schlocky, over-the-top B-movie is instead a taut action-thriller minimum on the former, but heavy on the latter.  There are action sequences peppered throughout, but they're subdued encounters that usually end with Snake running away from whatever is hunting him down.  What it lacks in thrills it more than makes up for with its eerie atmosphere and offbeat characters.

An antihero is someone who doesn't stick to the rules, but will get the job done and help others, should the situation call for it.  Snake Plissken fits this mold to a tee.  Having previously starred in John Carpenter's Elvis as the titular singer, Kurt Russell solidifies himself as an action hero in this role, not to mention becoming a regular of John Carpenter's in the process.  Plissken is a man of few words.  He hates authority figures, doesn't listen to rules, and isn't really contempt with helping people, unless it's relevant to his objective.  Case in point, while searching a theater for the President, he happens upon a group of goons assaulting a barely-unconscious woman, but instead of shooting them and saving her, he just moves on.

In various interviews, writer/director John Carpenter notes that Plissken is essentially a facade of himself, and one can see many similarities between the two.  Snake Plissken doesn't entirely do things solo, as he finds himself receiving help from a few individuals later in the picture.  One of these people is a cab driver (Ernest Borgnine), who knows his way around the streets and about the different gangs who hold control of the city.  Like real-life cab drivers, he's always there to help the characters get out of a cinch, whether it's when Snake's evading crazed sewer dwellers or helping him get the President to safety.

As he makes his way through the streets of New York, Snake learns the President is being held hostage by the Duke (Isaac Hayes).  The Duke is the leader of the largest gang in the city, and he believes holding the President for ransom might be an easy way of getting every crook locked up on this island pardoned, as crazy as that sounds.  Accompanying the Duke is Romero (Frank Doubleday), who looks like a coked-up Steve Buscemi auditioning to be a member of the Joker's gang.  Then, there's Brain (Harry Dean Stanton), who is the Duke's informant and the one supplying them with gas and oil, while also coming up with a plan to safely cross the bridge without getting blown up by the mines.

Brain also has a history with Snake, and he's initially hesitant to help the man out, given their history.  He eventually comes to his senses and ends up tagging along for the rest of the journey.  It's towards the end that the film humanizes Snake Plissken by showing he does have some concern for those accompanying him.  Although he manages to get the President to safety in the nick of time, none of the others survive the trek across the bridge.  When Snake asks the President if the sacrifices of Brain and company meant anything to him, he shrugs it off.  Indeed, the President is portrayed as being cowardly.  He never stands up for himself when the Duke is torturing him and is more concerned with achieving peace with China and Russia than anything else.

As a whole, the cast is excellent, bolstered by stellar performances from the actors mentioned above, as well as the likes of Tom Atkins and Lee Van Cleef, who play the chief security heads in charge of monitoring the island.  It's worth mentioning that this is a beautifully shot movie.  Cinematographer Dean Cundey does a great job at showing off how vast and empty New York City is.  There are many long shots where Snake is walking or running through the ruined streets, all the while stragglers quietly pass by him, and it's quite eerie.  The matte paintings and miniature work further enhance the scope of the city, beyond what the low budget is capable of showing off.  Fun fact: most of the matte paintings were done by a then-unknown James Cameron, simpler times, indeed.

Some might be turned off by the movie's glacial pace.  This is understandable, as the film meanders a bit during the first act as Snake looks high and low for the President, but in its defense, one could argue it's intended to show how aimless Snake is when he first arrives in New York, and only when he meets the cab driver followed by Brain does he get an idea of where to go next.  The movie picks up considerably during the final act, where he's captured, forced into gladiatorial combat, and escapes with the President and others in tow in a desperate race against time.  Never does the film become an all-out slugfest like the poster suggests, but there are ways Carpenter manages to keep the viewer on their toes, such as when Snake evades crazed, cannibalistic humans who rise from the sewers in search of food.

As required by law, all John Carpenter movies must be scored by the man himself, and like all of his other work, the music is ambient, but it fits the setting and enhances the feeling of isolation Snake experiences while exploring the city.  Even the theme starts off slow, but gradually builds to a synth, heroic-sounding crescendo.  My personal favorite tune, though, has to be the Duke's theme, which is a rhythmic cowbell and occasional drumbeat that makes for a catchy tune and also lets you know the Duke has rolled into town.

Escape from New York is classic John Carpenter, though and through.  It took a former Disney star and turned him into a rogue, one who screws the rules and higher-ups in an effort to accomplish the mission.  Snake Plissken represents the inner rebel in all of us, and it's not surprising Hideo Kojima was greatly influenced by the character when creating Solid Snake from the Metal Gear series.  The premise is absurd, but it always takes itself seriously, and for the better, something that can't be said for its sequel, Escape from L.A.  Regardless, this is a well-done picture rooted in B-movies, but with an A-plus quality to it.