The Current State of GamerGuy's Reviews 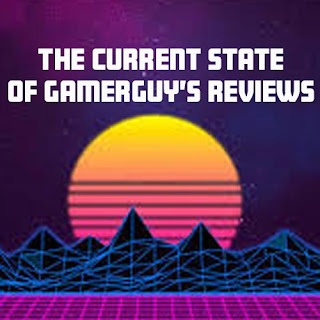 Welcome to another update on GamerGuy's Reviews.  As of this writing, it's May 11, 2019, and I'm for summer break once again, and for the final time.  For those who don't know, I'm a college student and am currently a senior at the university I go to.  I'll be graduating this December, so this marks the final time I get to enjoy summer off, and since it's summer break, time to discuss what's in store for GamerGuy's Reviews this summer, as well as a couple of other topics.

SUMMER, IT TURNS ME UPSIDE DOWN

For those new to my blog, every summer, I take time off from reviewing games to cover movies.  As much as I like video games, I also like movies.  Summer allows me to work on stuff planned for the latter half of the year, such as Drive-In of Terror, my annual horror marathon.  There will be some surprises in store, but I can't say what yet.  I do want to cover a few of the big summer blockbusters coming out, particularly Godzilla: King of the Monsters.  Additionally, you can also expect an interview as well.  I can't say who yet since I haven't reached out to them, but if all goes according to plan, you can expect the interview to be published later this July.

Secondly, I plan on traveling to a couple of conventions this summer.  At the end of June, I'll be attending my state's convention, the Mississippi Comic Con, and in July, I intend to travel to Missouri to attend Crypticon in Kansas City.  Right now, I'm saving up money for both conventions, especially Crypticon, since it will be the first time I've traveled out of state on my own.  A podcast channel I follow called Revival House will be there, and we might do some collaborating while I'm there.  My plan is to write articles about my experiences at both conventions, and maybe I'll land a few interviews with the guests, we'll see.

Speaking of Revival House, last week I did a commentary with them on the film Mortal Kombat: Annihilation.  It was the first time I ever collaborated with someone, and though my knowledge on Mortal Kombat isn't much, we had a blast doing the commentary, and it's up on their channel for everyone to listen to (VIDEO AT THE END OF THIS ARTICLE!).  I plan on collaborating with Revival House again next month to do The Return of the Living Dead, so stay tuned for that.  Keeping with the theme of collaborations, I've been in talks with someone who does game reviews on YouTube, and we've been spit-balling the idea of doing a crossover where we take a look at some Godzilla games.  Nothing has been set in stone, yet, but I hope to offer more details soon.

THE STATE OF GAMERGUY'S REVIEWS

GamerGuy's Reviews is in a bizarre spot.  For the first half of 2019, I experienced quite a few shake-ups in my personal life, which have affected my ability to write and podcast.  In March, the karate dojo I spent the last 11 years training at closed down due to a lack of membership.  When a place you spent 11 years of your life coming to and training at goes out of business, it's a real kick in the pants.  Additionally, one of the classes I took this semester didn't turn out the way I expected.  I wasn't earning bad grades or anything like that, but the plan my teacher had set up for this particular class didn't work in his or our favor.

Besides publishing my own content, I do freelance writing for two different websites.  Unfortunately, it's back to only one since I've been put on temporary leave, more or less, for writing for VHS Revival.  I had planned on contributing at least one article a month to their website, but a few weeks ago, the creator of VHS Revival messaged me to let me know I wouldn't be able to write for them, for now, at least.  He explained my writing has a lot of potential, but it's not quite up to the standards of what he wants for the website, which I understand.  He's still keeping me on as a contributor, but it will be quite a while before any new articles written by me get published on VHS Revival.

Despite these obstacles, I've persisted and stayed strong, and going into the next half of this year, I want to get rid of the bad and bring in the good.  I'm 22 years old and have been writing as a hobby for four years now.  I've had my ups and downs, but I've never given up.  Now is the chance to take what I'm capable of to the next level, to which I say, let's do this.  I've got a lot of big plans for GamerGuy's Reviews, and I'm the only one capable of pulling them off.

In March, I started doing audio commentaries as a way to branch out from the traditional reviews.  Let me just say, it's not easy; then again, nothing is.  However, much like my writing, the more podcasting I do, the better I'll get at it.  I plan on uploading at least three audio commentaries a month, so besides reviews, you're going to get commentaries.  These allow me to unwind and talk about the movie and various other topics.  Plus, it puts the ghost town that is my YouTube channel to great use.

Just a bit of personal advice for those looking to do their own podcast, but don't be afraid to mess up.  Your first few episodes or commentaries aren't going to be masterpieces, but as you progress, you'll begin to figure out the kinks and where you can improve.  I'm doing this on my own, no one else is involved, so I have to make sure I have plenty to talk about or else the listener will get bored.  For that matter, make sure to have fun.  Commentaries don't need to be dry, monotone experiences that sound like you're reading off a Wikipedia page.  Hang loose, make jokes, and keep the experience as lively as possible.  Remember, the crappier the movie, the funnier the jokes.

As of this writing, my blog has almost 6,400 views, which is impressive, but I know my content is capable of reaching a wider audience.  As I said before, I have a lot of huge plans for GamerGuy's Reviews, from creating an actual website to publish my content on to eventually producing video reviews, in addition to the articles and podcast.  It's a lot, yes, but the only person who can pull this stuff off is me.  I've been writing for four years now, as a hobby, but if I want to turn this into something that benefits me in the long run, I have to step up my game.