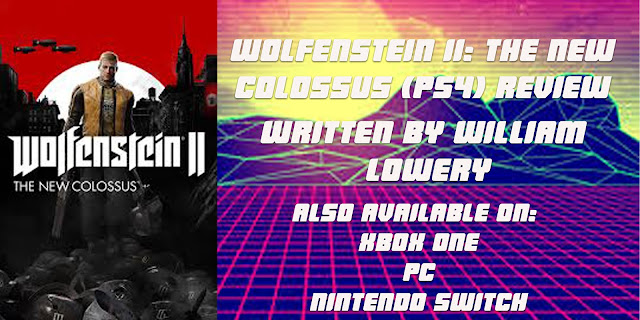 Wolfenstein: The New Order is one of my favorite shooters and was also responsible for getting me interested in the Wolfenstein series.  Growing up, I had heard about the games and how Wolfenstein 3D laid the groundwork for the first-person-shooter genre to take and evolve into its own things, but I never played any of the games, part of it stemming from the fact I grew up in a household that didn't want me to play M-rated games when I was a young kid.  When I got a PlayStation 4 in 2015, one of the first titles I purchased was the New Order.  Thanks the New Order, I'm a fan of the games.  The 2014 soft-reboot did a great job modernizing the old-school gameplay of prior entries, while also telling a great story about a man from a bygone era trapped in a world dominated by Nazis.

At the end of the New Order, B.J. Blaskowitz is wounded after defeating long-time nemesis General Deathshead.  Before Deathshead's bunker is nuked, B.J. is rescued by the Kreisau Circle and taken back to Eva's Hammer, but he slips into a coma.  A few months later, and he wakes up in the middle of a firefight between the resistance and the Nazis, who have managed to track down the submarine they're on.  Unfortunately, B.J. is in poor shape and can't walk, so he grabs a wheelchair and makes his way up top to where his wife Anya and the other members are holding off the Third Reich.  B.J. has been labeled a criminal and Frau Engel from the last game wants him dead.

They manage to escape their pursuers but need to come up with a new plan of action, one which involves tracking down the pockets of resistance scattered across America.  However, B.J. is struggling to cope with the fact he's barely holding on to life, and he doesn't want Anya to share his suffering, especially since she's pregnant with twins.  During the journey to liberate America, B.J. confronts some skeletons from his closet, and is given a new lease on life, one which re-motivates him to go after and kill the villainous Frau Engel after all the crap she's put them through.

Wolfenstein II is probably the darkest entry in the series, for the first half at least.  Whereas the New Order and the Old Blood had a nice balance of story and gameplay, the sequel puts a bigger emphasis on narrative and character development.  B.J. Blaskowitz is a broken man, his entire body is messed up and he's conflicted, emotionally speaking.  This is a far cry from the badass Nazi killer of prior installments, and in a first for Wolfenstein, the game delves into his past and suffice to say, he had a messed-up childhood.  Through various flashbacks, the player learns about B.J.'s abusive, racist father, who constantly berated both his wife and son and figured the best way to make a man out of his child was to beat the snot out of him.

Traumatic childhoods aren't the only way the game attempts to shock us, as like in the New order, the portrayal of a Nazi-occupied America is a frightening sight.  At one point, B.J. travels to Roswell and sees how the Third Reich has managed to brainwash the country into thinking fascism is better than democracy.  Listen closely amongst the civilians talking and you'll learn slavery has been re-instated, not to mention the KKK and Nazis are good friends with one another.  Scenes such as these are less shocking and more satirical, and the writing during these moments wouldn't seem out of place in a Paul Verhoeven flick.

At times, though, it feels like the gameplay takes a back seat to the story.  The gameplay isn't bad, but it's clear developer MachineGames wanted to focus more on what makes Blaskowitz tick and how he tries to struggle with the fear of dying and not being able to witness the birth of his kids.  Yet, the dramatic moments are juxtaposed against comedy which often doesn't gel with the rest of the experience.  During one cut-scene, B.J. and Anya are arguing when all of a sudden, a man bursts out of the bathroom talking about how great the toilet is.  Things take an even sharper turn in the second half of the game.

MAJOR SPOILERS AHEAD, but B.J. gets captured while revisiting his childhood home and is executed in front of a live audience.  However, the Kreisau Circle gets his head and manage to reattach it to the body of a cyborg, turning him into a Nazi-killing RoboCop.  From there, the plot becomes noticeably more upbeat and fun, with plenty of over-the-top action and ridiculous moments. It's a bizarre case of tonal whiplash.  It's like going to a funeral for a loved one and then the next day, you go to a strip club and have a wild time, almost as if the previous day never happened.  In short, the New Colossus' story isn't bad, but it is all over the place.

Wolfenstein II's gameplay is largely unchanged from its predecessor; in other words, it's still an excellent blend of old-school and modern shooter mechanics.  From the introductory sequence up until his execution, B.J. is a glass cannon.  His armor count is high, maxing out at 200, but his health remains at 50, so taking on any Nazis requires an extra bit of caution.  Keeping in tune with the last game and its prequel, the Old Blood, every level provides players multiple options for either stealth or going in like a wrecking ball.  Be careful if you choose the latter, as there are a lot more with officers than before.

In the New Order, enemy officers could call in reinforcements if they or a Nazi soldier spotted Blaskowitz, and if you took them out, then it's no additional support.  The sequel amps up the number of times where enemy officers are present, to the point you spend a lot more time sneaking around than participating in full-fledged firefights.  One of the problems with the Old Blood was that the first few hours were nothing but stealth, and given how fragile B.J. is for most of the campaign, expect to sneak around a lot.  Keep in mind, I'm not saying the stealth is bad, it works, and it's satisfying to sneak up on a soldier and cut him in two with a fire-axe, but the actual combat feels dialed down.

When there is shooting, the gunplay is satisfying and is supported by a varied selection of weapons.  B.J. can wield pistols, shotguns, SMGs, assault rifles, and a grenade launcher.  Depending on who you save in the opening prologue, you'll either obtain the Dieselcraftwerk or the Lasercraftwerk.  The Dieselcraftwerk fires sticky bombs that can be remotely detonated, while the Lasercraftwerk, a returning weapon from the New Order, is a laser cannon.  Even better, you can dual-wield any two weapons you want, so if you want to tear through Nazis with a shotgun in one hand and an assault rifle in the other, knock yourself out.  Firearms can be upgraded via kits found in each level; additionally, there are three skill trees tailored to each play style.

Unlike in the New Order, where skills and other perks had to be unlocked by doing specific actions, the New Colossus streamlines the process to where all you have to do is perform X number of kills of pick up a certain number of items to unlock a skill.  After B.J. becomes a cyborg, he gets access to one of three abilities, the other two not chosen can still be acquired through side missions, more on this shortly.  Ramshackles turns Blaskowitz into a Nazi-killing Kool Aid Man, as it allows him to pummel through certain walls and enemies.  The constrictor harness lets him squeeze into vents and other tight spots to get the drop on bad guys, although spending too much time stretched out slowly drains health.

Finally, the Battle Walker lets B.J. reach high spots through special leg extensions.  The new abilities are a great way to mix up the gameplay since each one accommodates how one plays the game.  B.J. will need all of the weapons and abilities he can get if he wants to take down the Nazis.  Enemies include soldiers and the obtrusive officers, as well as heavily-armored soldiers who dual-wield laser cannons, incendiary shell launchers, or .50 Cal shotguns.  Plus, there are robots, dogs, and the occasional 200-foot tall mech to contend with, but the AI is spotty.  During shootouts, they're competent enough, but in stealth, they're completely oblivious to your presence.  There were plenty of instances when I killed a Nazi and his comrade didn't bat an eye, especially when said soldier was standing right next to him.

Wolfenstein II is a lengthy game, taking anywhere from ten to twelve hours to beat, depending on how much time you spend with the side missions.  Halfway through the game, B.J. can start going back to previously explored areas to find and kill high-ranking Nazi commanders.  To access these missions, you need to collect a certain number of Enigma codes and then decipher their location via the Enigma machine.  Though optional, the side missions do allow you to go back and find any collectibles you might have missed the first time around, such as gold, letters, toys for Max Has, or albums.

Visually, the game looks excellent.  Wolfenstein II runs off the ID Tech 6 engine, which was also used for the 2016 Doom title, and the game boasts excellently detailed characters and environments, plus well-edited cinematic and ridiculously gory violence.  The locations, though, lack variety, since a lot of the action occurs in factories and other, similar-looking industrial areas.  Also, the game crashed once, but this problem never occurred again.   Meanwhile, sound is excellent.  The voice cast, particularly Brian Bloom as B.J. Blaskowitz, is great, as is the music.

Wolfenstein II; The New Colossus lacks the surprise of its predecessor nor does it have the tight balance of story and gameplay.  Much of the game is dedicated to plot rather than action, and B.J. spends a good portion of the experience in a sad, broken state, until he's resurrected.  From there, the game becomes a fun, pulpy adventure in line with past Wolfenstein games, although it does come to a close rather abruptly.  Similarly, the gameplay, though solid, tends to emphasize stealth over shooting, although the gunplay is satisfying.  Despite its problems, the New Colossus is a good game, albeit one  which emphasizes story, for better or for worse.