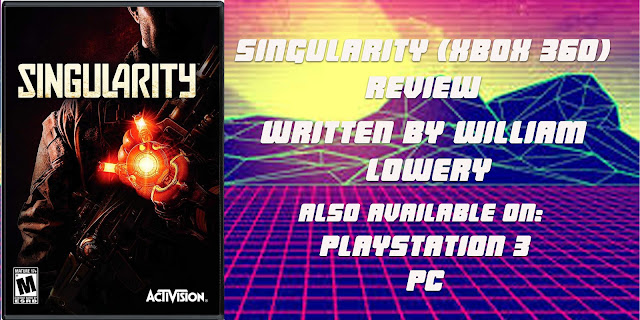 Game development isn't an easy business.  Compared to film-making, creating, developing, and shipping a video game is a rather time-consuming affair.  The teams are made up of individuals all in pursuit of one goal: to create a fun, compelling experience, but factors such as time, money, technical issues, or publisher interference can derail things quite easily.  In doing research on Singularity, I was a bit surprised to learn the game was developed and shipped within the span of ten months.  This is because developer Raven Software struggled for nearly two years trying to develop the game, and then Activision told them to finish the game within the allotted time, or else it would be cancelled.

Captain Renko and his partner Private Devlin are sent to a remote island off the coast of Russia to investigate reports of unusual signals coming from the area.  Once they arrive, an electromagnetic burst erupts from the place, disabling the helicopters and causing Renko and Devlin to crash-land.  They survive, only to learn the location is Katorga-12, an island used by the Russians during the Cold War to research an unknown element called E-99.  An accident there has turned Katorga-12 into a ghost town populated by an assortment of nasty creatures spawned from the incident.  Renko is searching for Devlin when he is suddenly transported back to 1955.

He saves a man from being crushed by burning debris; afterwards, he's sent back to the present, except the world is now occupied by a man named Demichev.  Renko reunites with Devlin, but they are shortly captured by Demichev's forces and Devlin is executed.  Renko escapes and encounters Barisov, a scientist who claims to know how the timeline can be fixed to prevent Demichev's rise to power.  Using a device called the TMD, Renko must travel between the past and present to correct history and stop Demichev.

Time travel is a tricky subject to tackle in entertainment due to the plot holes that can arise if the rules aren't clearly explained or are broken by the actions of the characters.  Unfortunately, Singularity falls into this trap.  The story is easy to follow, but problems arise as the game progresses.  Without spoiling too much, the game treats a plot twist that occurs towards the end of the game as this huge surprise, even though said individual was encountered early on in the campaign.  Additionally, much of the information regarding how things are is found through audio logs and notes scattered around Katorga-12, so if you ignore them, chances are you'll be lost.

It also doesn't help that Renko is a silent protagonist, and given the subject matter, it's odd the developers chose to go with this direction.  There are some interesting concepts the narrative toys with, but it never expands upon them.  For example, there are a few instances where Renko must use the TMD to travel from the present to the past to change events.  However, these sequences are incredibly short and only offer a small glimpse at what could have been.

Most of these problems can be traced back to the troubled development the game went through, and though the plot has its faults, the look and feel of the title is what saves it.  The abandoned, rundown facilities and landscapes of Katorga-12 call to mind the real-life town of Chernobyl, as well as media such as Stalker, Metro 2033, and Bioshock.  The first hour, where Renko is exploring the island is quite eerie as he works his way through places once filled with life which are now decaying, empty, and littered with skeletal bodies and other sights.

Take Call of Duty, mix it with the powers of Bioshock, and the alternate history motif of Wolfenstein, and that's Singularity in a nutshell.  The gameplay follows many of the tropes associated with shooters from the early-to-mid 2010's, including very linear levels, a two-weapon limit, and a six-to-seven hour campaign.  What sets Singularity apart from similar ilk is the ability to manipulate time, which opens up plenty of creative opportunities for how to take on enemies and solve puzzles.  At first, Renko has nothing but guns he finds to protect himself, but after meeting Barisov, he obtains the TMD, short for Time Manipulation Device.  This gadget is outfitted with a variety of abilities centered around the concept of time.

With the TMD, the player can cause soldiers to age rapidly and turn to dust, restore metal crates and use them as platforms, or generate a bubble so everything in its vicinity is frozen in place.  The device also has a telekinetic function, which allows Renko to grab objects, including grenades and rockets.  Initially, it can only age or de-age something, but new powers will be acquired as you progress.  The TMD runs on E-99, which does slowly regenerate over time, but it can be refilled quickly by finding energy cells.  E-99 also doubles as a currency used to upgrade the TMD and buy perks such as increased health or the ability to carry more energy.

Weapons can also be upgraded by finding kits and visiting a weapons' locker.  When the game begins, ammo and health are in short supply, yet it becomes less of a concern down the road.  The guns consist of genre standards such as an assault rifle, a shotgun, a sniper rifle, and an incredibly weak pistol.  There are only a handful of unique firearms to find, including a minion and a special grenade launcher.  My personal favorite is a modified sniper rifle called the Seeker, which fires an explosive bullet that can be guided towards its target; however, ammo is limited and it can't be equipped at weapons' lockers due to it only being a prototype.

Guns and the TMD will be useful against the bevy of mutated creatures and Demichev's forces scattered about Katorga-12.  The mutants include tall, shriveled beings, beasts capable of phasing in and out of reality, and really annoying ticks which explode within the player's vicinity.  There are two boss fights, both of which are disappointing since all you do is expose their glowing weak spots and shoot them until the boss is dead.  Equally lackluster are the human soldiers.  You'll fight regular ones armed with an assault rifle or shotgun, as well as heavily armored variants equipped with a mini-gun or rocket launcher.  It would have been cool to see special types of soldiers armed with E-99-infused devices, but this isn't the case.

There's a right way and a wrong way to play Singularity.  If you only use the guns and barely the time-manipulation powers, then the game is a competent-but-unremarkable shooter.  I made this mistake the first time through and as a result, I found the experience underwhelming.  After a recent play through, though, I realized the true potential of the combat by using the abilities much more often.  When played this way, the game is a lot better, but it also highlights the untapped potential this title had.  Although there is a lot of shooting, there is the occasional puzzle to solve, most of which are uncomplicated and easy to figure out.  Expect to raise a lot of steel shutters using a metal box.

Additionally, things become a cakewalk the more you upgrade the weapons and abilities.  Ammo, health, and E-99 energy become so readily available it's kind of ridiculous, and chances are by the campaign, most, if not all of your abilities and whatnot will be maxed out.  As mentioned earlier, levels are incredibly linear, so the audio logs, notes, and other goods are pretty easy to find.  A new-game-plus option would have gone a long way to giving players an incentive to restart the campaign with everything maxed out but have tougher enemies.

It's been almost a decade since this title came out, but the graphics still look good.  The visual effects for the different powers of the TMD are cool to look at, such as when you turn a soldier to dust or unleash a time orb, shoot a nearby barrel, and witness how the explosion is frozen in place.  The rugged, dreary landscapes of Katorga-12 are creepy, desolate, and look like you just walked into Chernobyl, which contrasts with the clean and colorful look of the island during the 1955 sections.  Voice acting is competent, although the lack of subtitles is distracting since the audio levels feel off, even after various adjustments.

On paper, Singularity is a great game, but in execution, there's a lot of untapped potential.  I give Raven Software props for pulling this off within a short timeframe, but at the same time, the troubled development and rushed production does show in the final product.  The story is a bit messy and all over the place, while the gameplay is equal parts routine and clever.  The gunplay is run-of-the-mill, but the TMD is a great tool to use and there's a lot of ways to mess around with time.  Had the game received proper development time, it would have made a huge difference.  As it stands though, Singularity is an amazing title trapped within a decent shooter.