Hello people of the Internet,

This is an update to let readers know what the current status of GamerGuy's Reviews is, as well as to make a few announcements.  2019 has been a bit of a slow start, the intended reviews for January were replaced with a Cubed3 review of Earth Defense Force 2025 and a discussion on the Ghostbusters 2020 announcement.  I was focused on getting things together for the start of my spring semester, hence the lack of reviews during January.

February was a good turnaround, as I reviewed three of the four games in the Red Faction series, as well as published a review of The Texas Chainsaw Massacre Part II for VHS Revival.  The Red Faction Armageddon review will be published later today, but I also want to take the time on this post to make a special announcement.

Saturday, I got a microphone and downloaded the likes of Adobe Photoshop, Premiere, and Audition; in other words, commentaries, which I announced during my year-in-review retrospective, are coming soon.  There will be at least two per month and they will published onto Youtube on Sundays.   The first one, a commentary on The Return of Godzilla, will be uploaded this Sunday, followed by a commentary on Godzilla 1985.

I'm very excited to bring y'all this news, since it shows how I'm willing to branch out.  I haven't started creating an official website, yet, but when it's ready, I'll inform the masses.  Additionally, last Friday, I did an interview with Robin Block, executive producer on the upcoming, crowd-funded documentary In Search of Darkness: A Journey Into 80s Horror.  We had a great discussion about 80s horror and the documentary itself, and the interview will be published tomorrow for y'all to see.

2019 is just getting started, but I'm excited by these new opportunities.  There's some other stuff in the works I can't talk about yet; still, this year is shaping up to be a most excellent one.  Keep on reading, and tune in this Sunday for my first commentary.  Below is the artwork, cheers. 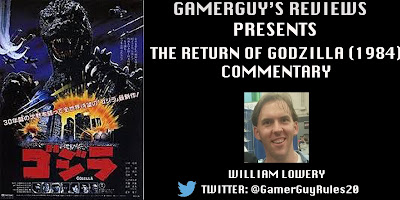 Posted by William Lowery at 9:29 AM