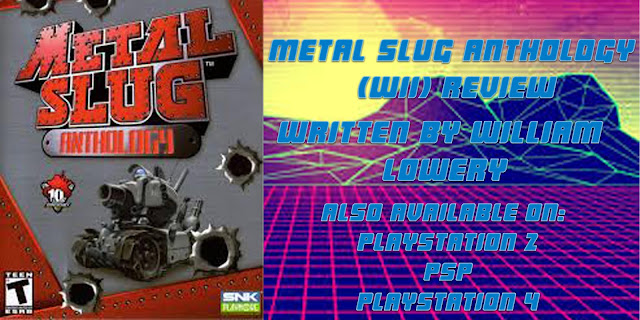 Arcades are a thing of the past.  It's a bold statement to make, yes, considering they are still around, but they're not what they used to be.  From the 80's up until the early 2000's, arcades were the place to go to hang out with friends, compete with one another, and just have a fun time.  Spaces inside malls that used to be dedicated to rows upon rows of quarter-stealing machines are now shoe stores, and if you want an arcade now, you have to go to a movie theater or a Dave and Buster's, but it's not the same as it used to be.  Nostalgic rambling aside, arcades allowed publishers to rank in the big dough, and companies such as Namco, Sega, Midway, and SNK dominated the market.

Speaking of SNK, during the 90's, you couldn't walk into an arcade without seeing at least one SNK arcade game.  The King of Fighters, Fatal Fury, and Samurai Showdown are the ones gamers tend to remember the most, but then there was Metal Slug, a.k.a. SNK's answer to Contra.  In modern times, the series has gone quiet, with the last installment being Metal Slug XX, a remake of Metal Slug 7.  Aside from various mobile spin-offs and ports, Metal Slug has fallen dormant.  Until it makes a proper comeback, one way to enjoy the series is through Metal Slug Anthology, a collection containing seven games from the beloved franchise.

Metal Slug isn't renowned for having a deep, thought-provoking story.  The basic set-up is there's an bad guy named General Morden who wants to take over the world, and the only people who can stop him are a ragtag group of commandos.  For those wondering, the name "Metal Slug" refers to a tank used by the good guys.  In the original Metal Slug, Morden is the only antagonist, but as the series progressed, he would be joined by a bevy of strange, unusual creatures.  In Metal Slug 2, aliens show up towards the end of the game and kidnap Morden, so the heroes must team up briefly with Modern's forces to stop the aliens.  Metal Slug 3 brings back the aliens, but also adds zombies, Sasquatches, killer plant monsters, and tons of other outrageous beasts.  Metal Slug 5 lacks Morden, and instead the primary antagonist is jungle rebels and natives under the influence of an evil mask.

Part of the charm of the games is seeing what outlandish enemy type you'll have to fight next, but there's plenty of humor packed in as well.  Metal Slug is a send-up of 80's action movies, but it also isn't afraid to have fun with itself.  This is a game where picking up too many food items makes your playable character fat, which comically enlarges his gun and replaces his knife with a fork as a close-ranged attack.  There are plenty of nods to pop culture peppered throughout as well, including an amazing parody of Independence Day at the end of the second game.  When you get down to it, though, Metal Slug is about intense, side-scrolling run-and-gun action, which does not disappoint.

Metal Slug Anthology includes Metal Slug to Metal Slug 6, as well as Metal Slug X, an enhanced version of the second entry.  All seven games play the same but feature little nuances between one another.  The first title is a basic affair.  The only playable characters are Marco and Tarma, with the second player controlling Tarma, and the only enemy faction to worry about is General Morden and his never-ending supply of troops and vehicles.  From Metal Slug 2 and onwards, there are four selectable characters, with 2 adding Eri and Fio.  Tarma and Fio are replaced by Trevor and Nadia in the fourth installment but are back for the fifth one.  Lastly, Metal Slug 6 adds Ralph and Clark from The King of Fighters.

Every title consists of six stages, and the goal is to go from point A to point B and kill anything in one's way.  Scattered about each level are POWs to rescue.  Saving them rewards you with either a weapon, more grenades, or an item for bonus points.  In rare circumstances, they'll tag along and unleash hadoukens at nearby enemies until you die, I'm no kidding.  POWs also act as a score multiplier because if you manage to beat a stage without dying, all rescued POWs count towards your overall score.  In Metal Slug, each one is worth a thousand points, while in the sequels, they're 10,000 points each.  However, if you die, which will happen, you lose your current POW count.

To even the odds, there's an eclectic selection of weapons and vehicles to acquire in each stage.  The default firearm is a pistol with infinite ammo, plus ten grenades, but there are various weapon pick-ups to make things easier.  Heavy weapons include machine guns, rocket launchers, heat-seeking missiles, shotguns, laser cannons, exploding RC cars, grenade launchers, katanas, and a flamethrower, because flamethrowers are awesome.  Heavy weapons take up ammo, which is possible to find, but it's not common.  Besides a boatload of firepower, there's various vehicles to pilot as well.  The Metal Slug is the most common one you'll find, and it's a tank equipped with a Gatling gun and artillery shells.  Other vehicles include a motorcycle, a submarine, a plane, plus animals such as camels and donkeys.  Nothing strikes fear into the heart of the enemy more than camels equipped with machine guns.

From the moment a mission starts, the selected character is assaulted from all fronts by all sorts of enemies, tanks, and other assorted creatures and machinery.  The most common enemy type is General Morden's troops, who do things such as throw grenades, wield riot shield and fire a pistol, as well as launch mortar rounds.  They're easy to dispatch, but they tend to use their numbers to overwhelm and distract the player, especially during mini-boss and boss fights.  The series is no walk in the park, and while the games are quite short, taking anywhere from 30 minutes to an hour-and-a-half to beat, they're no cakewalk either.  The key to survival is having a lot of patience and making the most out of the available weapons and vehicles.  There is some strategy to the chaos; for example, jumping in and out of a vehicle results in a few brief seconds of invincibility, and in the heat of battle, it's the difference between life and death.

Compilations tend to have titles which aren't as good as the others in the roster, but Metal Slug Anthology is one of the instances where every title is fun to play.  All of the games in this collection are solid, with my personal favorites being Metal Slug 2/Metal Slug X and Metal Slug 3.  Metal Slug 4 is fine, even though it recycles a lot of content from past entries, while Metal Slug 6 is probably the most difficult entry.  Besides featuring seven games to play, the collection also has various extras to unlock via tokens which are rewarded whenever you beat any of the games.  These include art galleries, music, and an interview with the creators of the series.

On other consoles, Metal Slug Anthology controls well, but the Wii version boasts a selection of gimmicky options in addition to the traditional methods.  Using the Wii remote and holding it sideways like an NES controller feels good, as does the Gamecube controller, but for some reason, the makers of Anthology tacked on a bevy of novelty options.  Why would I want to hold the Wii remote like a joystick and tilt it to move the character?  Why would I want to only use the nunchuck? Considering this came out not long after the Wii's release, it only feels like the developers are trying to cash in on the motion-control craze than anything else.

SNK games are renewed for their impressive 2D graphics, and Metal Slug is no exception.  Characters, locations, and animations look fantastic, and I like the comical details put into the sprites and backgrounds, which only adds to the game's sense of humor.  However, the Wii version suffers from tons of loading that occurs whenever you're transitioning from one part of the level to the next; oddly, Metal Slug 6 is the only one to not such issues.  Slowdown is frequent as well in Metal Slug 2 whenever there's too much action, but the re-release, Metal Slug X, fixes this problem.  Voice acting is limited to a handful of catchphrases and enemy screams, all of which are hilarious to hear.  The music for all the games is excellent, although the audio in Metal Slug 4 sounds compressed, but it's not a huge issue.

Metal Slug is one of the classics of the run-and-gun genre and my personal favorite run-and-gun shooter.  I love the crazy action and light-hearted nature of the games, plus they're incredibly challenging yet satisfying to play.  The collection is the perfect way for gamers to experience the series, but I'd probably recommend playing the PS4 or PC version of Anthology since it doesn't have any of the loading problems or bizarre control schemes like the Wii version does.  The Wii version is a fine choice, but the gimmicky control methods are clearly a product of their time.  Still, with seven games and a bevy of extras, this is the perfect way to get familiar with one of the classics from a bygone era.