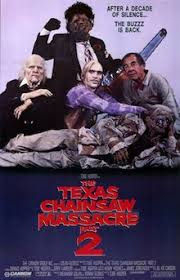 In the summer of 1986, the sequel to one of the most shocking films in cinematic history released, but audiences were in for a surprise with The Texas Chainsaw Massacre Part II.  Instead of featuring more of the mad, macabre, visceral imagery that made the first movie so gripping, they were instead treated to what could be best described as a funhouse from hell.  Not content with recycling the same old formula, director Tobe Hooper decided to lampoon his landmark picture.  After all, the poster, which clearly spoofs the one for The Breakfast Club, clearly lets you know this is a different kind of chainsaw.

With buckets of gore, over-the-top characters, and Dennis Hopper in the role of a lifetime, The Texas Chainsaw Massacre Part II has gone to become a cult classic.  Without it, it's likely the world wouldn't have been graced with the cinematic brilliance that is Bill Moseley, who plays the demented Sawyer family member Chop-Top.  What is probably the biggest sin, though, is that a scene was cut featuring the greatest drive-in movie critic of our time, Joe Bob Briggs, even though his name is still listed in the credits.  Damn you, Golan and Globus!