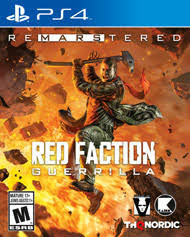 EDITOR'S NOTE: THIS REVIEW COVERS BOTH THE XBOX 360 AND PLAYSTATION 4 VERSIONS OF THIS GAME.  THE PLAYSTATION 4 FEATURES ENHANCED VISUALS, ALL OF THE DLC, AND SOME MINOR TWEAKS TO THE GAMEPLAY.

After the release of Red Faction II, Volition took a break from the series to focus on other projects, including a game adaptation of The Punisher and a crime titled called Saints Row.  Compared to the studio's other projects, Saints Row marked the company's first foray into the open world genre, and it proved to be a success.  While Saints Row garnered all the attention, Red Faction remained quiet until 2009, when the series was brought back through a new entry, Red Faction Guerrilla.  This installment was also a departure from what we had seen before.  No doubt influenced by the success of Saints Row, Red Faction Guerrilla was an open-world experience, and a damn good one at that.  Say goodbye to linearity and minimal destruction, as this one brings full-fledged destructibility into the sandbox.

Ever since the Earth Defense Force liberated Mars from Ultor's control, things have gotten worse for people living on the red planet.  Under the EDF's strict control, citizens are forced to mine and put up with their authoritative behavior.  Alex Mason has come to the planet to help his brother out, only to find out he's secretly working with the Red Faction, a mysterious resistance fighting back against the EDF.  The two go to and destroy an abandoned research facility; at least, that's what Dan tells him, but they get arrested and Dan gets killed when trying to escape.  Angered by his brother's death, Alex decides to find and join the Red Faction, who are ready and willing to liberate Mars by any means necessary.

In the DLC campaign Demon of the Badlands, you play as Samanya, a Red Faction member who comes from a group of scavengers known as the Marauders.  Set eight years before the events of the game, the DLC chronicles her efforts to keep her homeland free of EDF presence.  During the story, she frees her sister Vasha and learns the EDF are planning an attack on their turf.  After killing the commander in charge, Samanya rescues a bunch of civilians, including Dan Mason, from prison, and then the two find and free Hugo Davies, the leader of the Red Faction.

Red Faction Guerrilla continues the proud tradition of offering a barebones plot with little in the way of major twists, turns, or character moments.  Similar to Parker, Alex Mason is the everyman caught up in a struggle he originally wanted no part in.  Yet, as the game progresses and more of Mars is liberated, he ends up becoming the face of the resistance, and the one people look up to.  But as the buildings collapse and the Red Faction comes closer and closer to freeing the planet, your interest in the story starts to wane.  The callbacks to the first game are a nice treat, such as the fact many of the locations are named after characters from that installment, but otherwise, the stories for both the main game and the DLC are nothing special.

Eschewing the linear, first-person shooter gameplay of the previous two installments, Red Faction Guerrilla is an open-world game, one where the player can do anything they want and blow up as much stuff to their heart's content.  The principle goal is to liberate Mars, which consists of six sectors, by completing missions, side quests, and destroying anything and everything controlled by the EDF.  At any time, the player can pull up the map and see two meters, one showing the EDF's grasp on the district you're in, and another which shows the morale of the citizens.  The EDF meter is lowered by destroying targets of interests or beating side tasks.

Lowering the EDF's control is how you unlock new missions.  As for the civilian meter, the higher it gets, the more likely people will help out Mason, and it also acts as a bonus whenever you earn scrap from story missions.  Just make sure not to kill them, since it decreases their morale.  In Demon of the Badlands, there's only one area, Mariner Valley, and three story quests, so more content is put in for players to accomplish.  Beating missions, challenges, and destroying stuff rewards Mason with scrap, which can be used to buy new weapons, armor, or upgrades.  Besides the shift to a sandbox formula, the biggest change in Red Faction Guerrilla is the introduction of Geo-Mod 2.0.

No longer is the destruction limited to caves or walls; now, entire buildings can be destroyed, one brick at a time.  In other games such as Destroy All Humans or Mercenaries, buildings collapse once they receive a set amount of damage.  Here, the physics are more realistic.  Structures will slowly start to fall apart the more damage they receive, especially when the support beams are knocked out.  Seeing office buildings fall to pieces or a smokestack fall over like a tree is still impressive, and I'd argue Red Faction Guerrilla is still the champion in regards to destruction physics, since I've yet to see a game with this level in detail in regards to destruction.

To knock down buildings, though, Mason needs weapons, and the arsenal includes a mixture of everyday and unique firearms.  There are pistols, assault rifles, shotguns, and rocket launchers, good enough, but then there's interesting fare like a gun that shoots sawblades, or a rifle which fires nanite rounds that eat through anything it touches, be it humans, vehicles, or buildings.  The Re-Mars-stered Edition adds in a repair gun not found in the original release, so anything you destroy can be rebuilt, only to get destroyed again.  The circle of life, am I right?  The game also gets props for featuring the greatest melee weapon ever, the sledgehammer.  Who needs remote charges when you have a sledgehammer?

Though not ground-breaking (pardon the pun), Red Faction Guerrilla is one of the open-world genre's most entertaining titles.  There's a lot of content to dive into, and the optional side tasks enhance the feeling of being a revolutionist trying to free Mars.  You'll raid EDF buildings, protect Red Faction hideouts from enemy reinforcements, or pilot a vehicle to hold off enemy soldiers while the Red Faction steals supplies.  Then, there are the demolition puzzles, which put the player into a situation where he or she must destroy something using the pre-determined loadout.  It's great showcase of how intuitive the physics system is, and some of puzzles can be a bit tricky to figure out.

Of course, all of this mayhem is going to attract the bad guy's attention.  At times, the game can be quite challenging, which is due to Mason's frail nature.  Even with maxed-out armor, it doesn't take much to bring him down.  If you don't play it smart, expect to die a lot.  On the other hand, the ridiculously aggressive nature of the enemies leads to comical moments of stupidity, like when there's a massive pile-up of EDF jeeps filled soldiers trying to get a bullet onto Mason.

Whether it's on the Xbox 360 or the PlayStation 4, the game looks good.  The PS4 version supports better lighting and a smoother framerate, but it looks about on par visually with the Xbox 360 version.  Most of Mars consists arid deserts, which does make the world feel a bit empty, but as stated before, the destruction physics are and still remain impressive.  Expect some occasional physics glitches, such as when you destroy a tower, and the ladder attached to it is still intact and possible to climb on.

As for the voice acting, it's competent but forgettable.  Veteran voice actor Troy Baker voices Alex Mason, and he gives the performance all of the excitement of someone who found out they have to work extra hours.  Plus, it's not hard to think of Crackdown while playing the game given how the leader of the Red Faction is voiced by the same dude who voices the head of the Agency.  I expect him to shout at any moment, "Kills for skills, Mason!"

It took the series three games, but Red Faction Guerrilla is without a doubt the best entry in the series.  The shift from linearity to open-world does the gameplay wonders.  It's frantic, challenging, and an all-around blast to play thanks to the inventive guns, wealth of content, and incredible destruction.  The story is hardly improvement from what we've seen before, but it's hard to criticize it when the game itself is thoroughly entertaining.  Red Faction finally found its footing, its sense of identity, and for those who weren't impressed by the first two games, this one should change your mind.