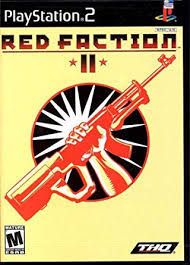 Every once in a while, a game comes along and makes me ask, "Why was this so well-received?"  This question has a double-meaning; on the one hand, it could be seen as a sign of curiosity.  For years, you've heard a particular title is considered a classic, and you're finally getting to see what the fuss is all about.  However, the question could also be a reflection of how when one plays a title, isn't impressed, and then wonders why it was praised when it first came out.  These thoughts ran through my mind while playing Red Faction II.  At the time of its release, the game received extremely positive reviews, with the PlayStation 2 version holding an 84-aggregate score on Metacritic, but given how far shooters have evolved since its release, Red Faction II now seems run-of-the-mill.

Set a few years after the original, the sequel doesn't continue the adventures of Parker; instead, it follows a demolition expert named Alias.  The sinister company Ultor has gotten their hands on Dr. Capek's nanomachines, so they can genetically enhance the Earth Defense Force's (no, not that Earth Defense Force) soldiers, but the nanomachines end up in the hands of a vicious dictator, Victor Sopot.  Sopot intends to use the technology to create his own army of super-soldiers, and he uses a group of soldiers as his test subject.  However, his paranoia gets the better of him, and he orders the six of them to be executed since he fears they might turn on him.  On the run from Sopot, the squad, including Alias, partners up with the Red Faction to overthrow him and stop the spread of nano-enhanced soldiers.

If you were expecting a better story, think again.  Red Faction II's plot is paper-thin and its characters even thinner.  It's a generic "Overthrow the Evil Dictator" storyline with an extremely obvious plot twist thrown in for good measure.  The six super-soldiers show glimpses of character potential, but the game's fast pace leaves little room for development.  From the moment the game starts, it's a never-ending sequence of shoot-outs and vehicle sections from one level to next, and any development is kept to a minimum.

What does make the narrative tolerable is the voice acting.  The cast includes the likes of Lance Henriksen, Jason Statham, and Sherman Howard, and all of the performances are decent.  It is strange hearing Statham's voice in a middle-tier game like Red Faction, considering he's now a famous movie star.  Another positive is the inclusion of multiple endings.  Depending on your actions and how high or low your morality is, the ending will vary in terms of the outcome and character fates, which provides mild incentive to replay the campaign, but not by much.

Red Faction II isn't a bad game; on the contrary, there are a lot of improvements to the combat, making it a smoother experience to play than it's predecessor.  From the get-go, the game doesn't shy away from letting the player use big guns, as the first stage starts Alias off with an assault rifle that has an under-barrel grenade launcher.  Later stages let him wield pistols, SMG's, shotguns, grenade launchers, and much more.  Most of the firearms have an alternate fire function, such as incendiary shells for the shotgun, while the pistol and SMG can be dual-wielded.

Like the first game, though, Geo-Mod is rarely utilized during the campaign, even more so here.  Explosives can tear apart walls and towers, but such moments are few and far between.  Rockets and grenades will be used to primarily turn bad guys into chunks of meat, and the enemy selection is varied.  There are no sudden difficulty spikes as in the original, but a couple of the boss fights will test your skills and patience, especially the latter.  Instead of using old-school health and armor pick-ups, the game's health system is more in line with the one seen in Halo.  If you take damage, then you'll have to wait a minute or so for it to recharge.  However, health packs can be found to speed up the recovery process.

Besides shooting everything in sight, there are also vehicle sections to break up the action, and these are fun.  Some of them, such as the hovercraft, are on-rails, but others, including the mech and submarine, are fully controllable.  Thankfully, there are no tacked-on stealth sequences, but the vehicular variety isn't enough to overcome the game's mediocrity.  As I said prior, the combat feels better and the weapons are fun to use, but the campaign is nothing more than a shooting gallery, and a short one at that.  The story mode takes only three to four hours to beat, and unless you want to go back and try to get a better ending, there's no other incentive to replay levels.

What could have helped out the campaign is if the other squad members besides Alias were playable characters and had their own special abilities and play-styles.  It's shown during cut-scenes each one has their own unique ability; for example, one has a cloaking device while another is a hulking tank who can soak up all sorts of damage, but the game never utilizes this idea.  As for the morality system, the meter goes up or down depending on whether or not you kill civilians or complete optional objectives such as helping out Red Faction soldiers.  A multiplayer mode is available, but to get the most fun out of the story mode, turn on the cheats.  Being able to set enemies ablaze with your bullets or turn them into exploding hunks of meat from a single round is hilarious to watch.

Red Faction II looks fine for the time it came out.  Certain environments, such as the ruined cities, sewers, and military bases look washed out, but other elements, such as the weapons or destruction, look decent.  Voice acting is a step-up from the original, partially due to the big-name talents involved, although the attempts at comedy fall flat, such as when goons shout "That was my cousin twice removed!"

Red Faction II is so painfully generic it's not even funny.  Far from a bad game, the sequel, while improving on certain aspects of the first one, is mediocrity at its blandest.  The story is meaningless and while the gameplay is action-packed, it gets boring fast.  Not helping matters is the extremely short campaign, which can be completed in an afternoon, and while the cheats codes do make things amusing and the alternate endings are an interesting idea, a lot of the game's potential feels wasted.  It's a disappointing follow-up to a tile which showed a lot of promise.